Memories made: Lily Hoag’s friends for life at Intimidators Stadium 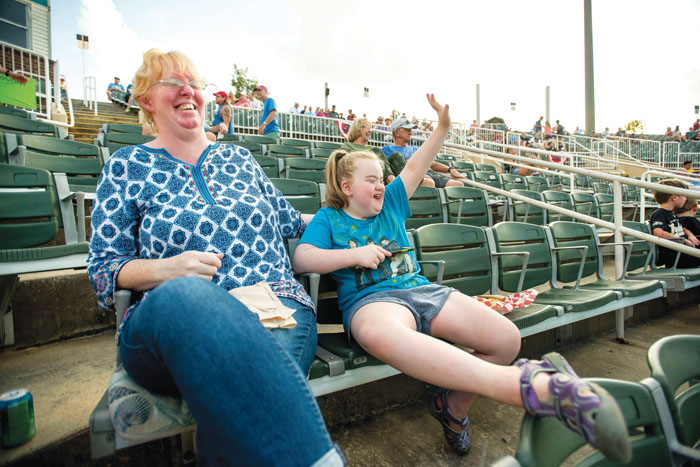 JON C. LAKEY/SALISBURY POST ...Robin Hoag and her daughter, Lily, love watching the Kannapolis Intimidators. Lily waves at the baseball players as they come up to bat. The family atmosphere and the relationships built between the staff and baseball players are the key to the enjoyment by the family.

Editor’s note: This is the fourth in a series of stories on the Kannapolis Intimidators’ final season at the Moose Road stadium.

KANNAPOLIS — Once you meet Lily Hoag, you have a lifelong friend.

At Kannapolis Intimidators games, you can find the 9-year-old behind home plate, eating fries dipped in cheese sauce, hanging out with the mascot, Tim E., and occasionally, shouting at a player to receive a wave in return.

The Hoag family used to attend Charlotte Knights games but two years ago, they became Intimidators season ticket holders, despite living in Charlotte. Lily’s mother, Robin, said they fell in love with the atmosphere.

“It’s homey and comfortable to be here, and it’s good entertainment,” Hoag said. “If you’re a sports fan, it doesn’t get any better than this. You can interact with the players.”

The players have a bond with Lily. Earlier this month, Lily attended a camp. While she was there, she received a card with notes, saying “Have a great time at camp” and “Can’t wait to hear all about it,” from the players.

“It was nice to have that personal touch with the guys,” Hoag said.

Lily was fond of one previous Intimidators player, Luis Curbelo. When he was sent to Great Falls (Montana) of the Pioneer League, Lily was devastated. But the team made sure Lily was OK.

Her favorite player got transferred to a different team in the organization,” Hoag said. “She was very upset the first game back, but every player on the team came over and gave a hug to give her a little more encouragement.”

As for Curbelo, Lily and he regularly chat on FaceTime.

“We love the experience coming here,” Hoag said. “It’s like a family. With Lily, it’s hard to find something she likes and is family-friendly, where she can just be herself. This is where she can be herself and she knows all the players. They know her.”

For her 13-year old son, he is typically running around the stadium, catching foul balls to pass to younger kids, or finding the ball if someone hits his first homer.

“If one of the guys hits a home run, if it’s their first or second, he’ll go to the backside and grab it and give it to him at the end of the game, especially if it’s the first one,” she said. “That’s kind of a memorable thing for the guys, when they get their first home run here.”

In return, he receives tips from the players, which tell him to play other sports to keep his muscles flexible.

Hoag is watching the game and occasionally teasing the other team if they strike out.

“I always say ‘buh-bye’ really loud,” she said. “Sometimes, they’ll wave at me.”

In the top of the ninth inning, the family will move to the third base line, ready to congratulate the team on its game.

She said, unlike the Charlotte Knights games, which is Triple A, it’s more personable at the Kannapolis A-ball level. The players will connect with the fans. She also likes the family atmosphere of seeing older couples or families like her own. She sees the same faces and they’re at every game — just like the Hoags.

Lily instantly connected to the players and the staff.

“After day one, with her, yeah,” Hoag said. “When she meets someone, and she connects, it’s on. She’s wide open. She just loves openly.”

Lily has plenty of friends, from the players to mascot Tim E., a costumed gator who comes by every game to say “hi” to her and “bite” her head.

“If someone is good to her and she can feel that, then she’s a friend for life,” Hoag said.

The Hoags will be at the new Intimidators stadium next April. The final game at the Moose Road location is this Thursday.

“It’s going to be a little sad leaving here, but hopefully it’s the same feel,” she added. “I think with the staff we have, it should be a good transition.”