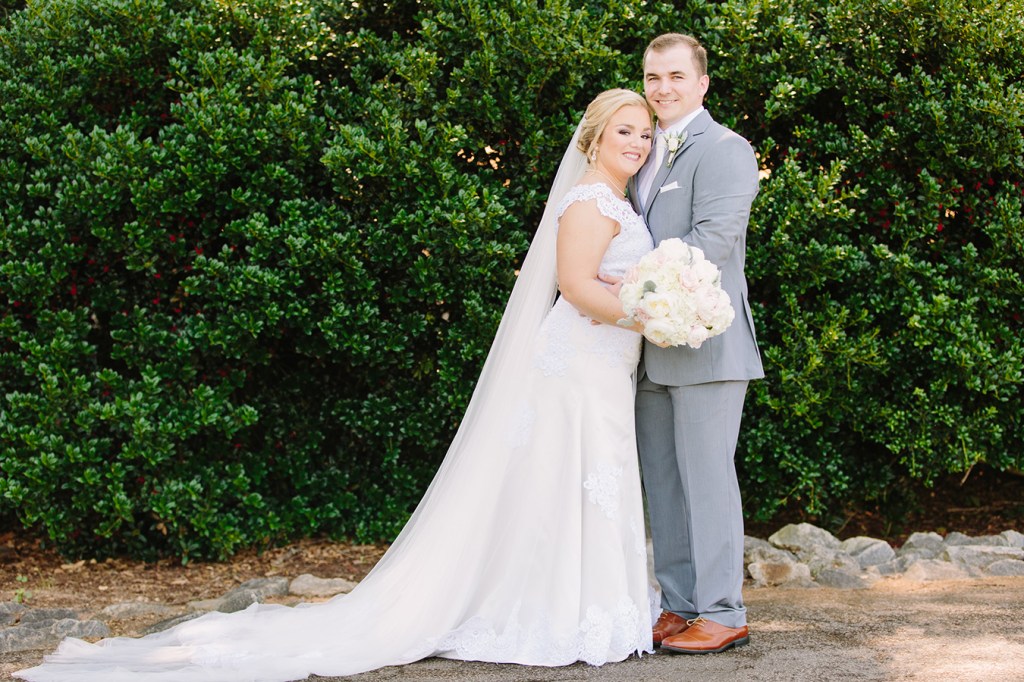 Camlin Van Buren Ayers of Seneca, S.C. and Bryce Dwayne Burns of Hixson, Tenn. were united in marriage Saturday, May 18, 2019, at First Baptist Church of Clemson, Clemson, S.C. by Dr. Kenneth Lance. A reception followed at the Owen Pavilion, Clemson Madren Center.
The bride was escorted by her father Bobby Ayers. Attending as her matron of honor was her sister, Callie Hurst of Raleigh. Bridesmaids were Emily White, sister of the groom, of Elkin; Natalie Burns, sister of the groom, of Concord; Hannah Smith of Seneca, S.C.; Sydney Arbaugh of Seneca, S.C.; and Riley Price of McBee, S.C.

Best man was Rodney D. Burns of Salisbury. Groomsmen were Chad Ayers, brother of the bride, of Mars Hill; Jordan White, brother-in-law of the groom, of Elkin; Cole Scroggs of Seneca, S.C.; Chandler Collins of Greeneville, Tenn.; and Teddy Chewing of Nashville, Tenn.

Rose Abernathy, cousin of the groom, of Conover, was harpist. Scripture reader was Elizabeth Ayers, sister-in-law of the bride, of Mars Hill. Melanie Guill of Seneca, S.C. was director. The bride’s dress was designed by the bride and the groom’s grandmother, Lynda Burns, who also made the dress.

The bride is the daughter of Bobby and Lanie Ayers of Seneca, S.C. and the granddaughter of Bob and Bea Ayers of Westminster, S.C.; Dubby and Dottie Robinson of Seneca, S.C.; and Tommie Jo Williams of Seneca, S.C. A 2012 graduate of Seneca High School, Camlin graduated from Clemson University in 2016 with a Bachelors degree in Psychology and a 2018 graduate of Tri-County Technical College with an Associates in Nursing. Camlin is a Registered Nurse at Erlanger Health Hospital in the Mother/Baby Unit in Chattanooga, Tenn.

The groom is the son of Rodney and Jerrie Burns of Salisbury and the grandson of Larry and Lynda Burns of Salisbury and Gerald and Dorcas Osborne of Cleveland. A 2012 honors graduate of West Rowan High School, Bryce graduated with honors from Clemson University in 2016 with a Bachelors degree in Agricultural Mechanization and Business with a double minor in Turf Management and Agricultural Business. He is a Driver Supervisor in the trucking division of Archer Daniels Midland in Chattanooga, Tenn.

The couple, who honeymooned in St. Lucia, is making their home in Hixson, Tenn.