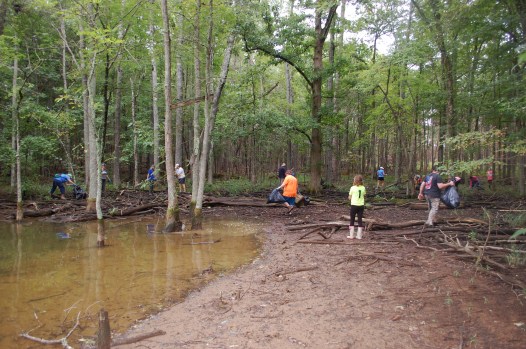 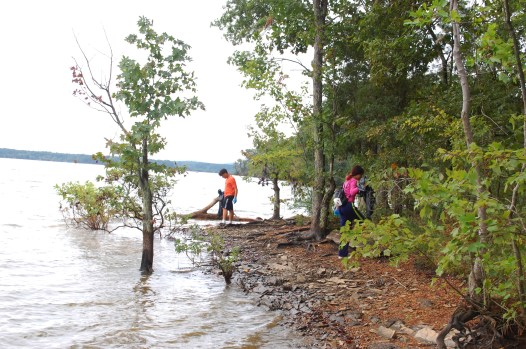 The event was sponsored by Muddy Sneakers, an outdoor education nonprofit, with the help of Rowan County Ducks Unlimited. The partnership between the two groups allowed for more than 60 bags of trash.

Drew Cornelison, the chairman of the county branch of Ducks Unlimited, said he noticed the amount of trash while setting up wood duck boxes last year. Helping with the nature preserve cleanup is part of Ducks Unlimited mission: conserving wetlands, Cornelison said.

Elise Tellez, the field officer director at Muddy Sneakers, said without the aid of Ducks Unlimited they wouldn’t have been able to cover so much ground.

Ashley Duncan, an administrative assistant with Rowan County Parks, said she comes to Eagle Point Nature Preserve to kayak and hike often and has taken note of the large amount of trash.

When people throw out their trash, Duncan said, they don’t realize that it creeps up in places like the nature preserve. Coming to the cleanup helps others be more aware of the consequences of littering.

Mario Garrido Lecca, a 12th-grader and Crosby Scholar, filled up bags of trash and commented that he was surprised by the amount of trash he found. This was the first major trash pickup he has done.

“If we don’t do it, we’ll destroy our planet,” Garrido Lecca said.

He said he felt sad and disappointed as he was picking up items that others had littered.

Anderson said they came out to fill a community service requirement for the Crosby Scholars. It was a good opportunity to give back while also being outdoors, something Anderson said her and her daughter don’t do often, she said.

For its first year, Rowan County Creek Week went well, according to Kelli Isenhour, education coordinator for the Rowan County Soil and Water Conservation District. Her goals of forming partnerships, bring awareness to keeping the waterways clean, conserving water and bringing together people and education others was met.

She said despite the hot week and the rainy Saturday, participants were constantly positive. Tellez also commented on the positivity and dedication to picking up trash. On Saturday, with the Eagle Point Nature Preserve cleanup, Isenhour could see the immediate impact of Creek Week. She frequently visits the nature preserve and walks along the lake with her dog. She said she has often been overwhelmed with the amount of trash she sees not being able to throw it away, but with about 30 people, they made the lake beautiful.

Isenhour said when she initially began planning Creek Week, she was thinking about planning three events but it grew to be 18 events starting Aug. 17. Throughout the week, she saw a diversity of people, ranging in age and race.

She is planning for this to be an annual event. Isenhour said she wants to see more groups join, especially those that are already in the education or nature realm.

High Rock Lake will have a cleanup on Sept. 21.