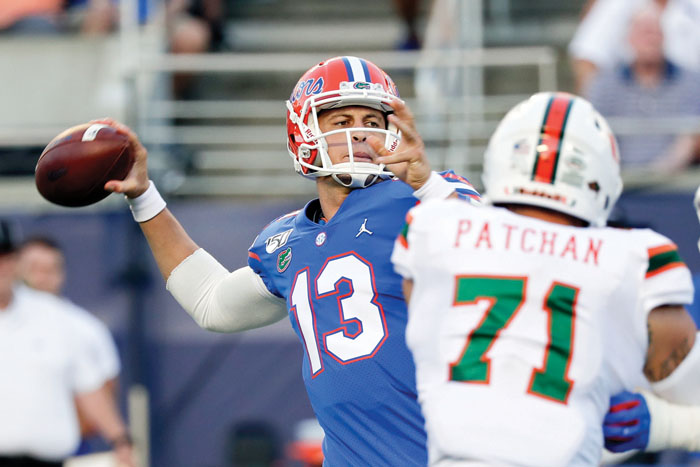 Florida quarterback Feleipe Franks (13) throws a pass as he is pressured by Miami defensive lineman Scott Patchan (71) during the first half of an NCAA college football game Saturday, Aug. 24, 2019, in Orlando, Fla. (AP Photo/John Raoux)

By MARK LONG AP Sports Writer
ORLANDO, Fla. (AP) — Feleipe Franks was clutch one minute and confused the next, showing the kind of inconsistency that got him benched five times in two years.
His job might be in jeopardy again if not for Florida’s defense.
Franks made up for three inexcusable turnovers by accounting for three touchdowns, doing just enough to help the eighth-ranked Gators beat rival Miami 24-20 Saturday night in a wild and wacky opening game of the college football season.
“Last five minutes of the game, I aged 10 years,” Florida coach Dan Mullen said. “That was exhausting.”
Franks threw for 254 yards and two scores and ran for another as the Gators won for just the second time in their last nine meetings with the Hurricanes. Franks also threw two interceptions — both horribly inaccurate passes — in the fourth quarter.
He looked anywhere from good to great, from lost to downright awful.
He dropped in a perfect pass to Josh Hammond that gained 65 yards and set up the go-ahead score in the fourth and later in the quarter threw right to a defender. He also fumbled in the first half while deciding what to do on a read-option play.
Florida’s defense bailed Franks out time and time again, finishing with a staggering 10 sacks and 16 tackles for a loss.
Miami converted a fourth-and-34 play with 1:30 remaining when Marco Wilson was flagged for pass interference. The Hurricanes moved the chains again thanks to another pass interference call against Trey Dean. One official threw one more flag in the end zone with 20 seconds to play, but it was picked up following a discussion.
The Hurricanes failed to score, and they needed a touchdown after Bubba Baxa missed a 27-yard field goal attempt wide right early in the fourth.
“We don’t have the maturity level to see a victory through,” first-year Canes coach Manny Diaz said. “That’s a maturing process we have to go through.”
Franks took a knee to run out the clock, celebrated with teammates and then ran toward the tunnel and punted the ball into the stands. At least this one didn’t count as a turnover — or result in a penalty.
The teams combined for five turnovers — Florida had four — and 225 yards in penalties.
Miami got to break out its revised Turnover Chain after each of Florida’s gaffes and was able to debut its Touchdown Rings following both trips to the end zone.
“We wanted to spice it up,” Diaz said. “The 305 (chain) came out really well. We talked about offense wanting something else, wanting something different. Hopefully we’ll see a lot more of them.”
Miami’s Jarren Williams completed 19 of 29 passes for 214 yards and a touchdown in his first career start. DeeJay Dallas ran for 95 yards, including a 50-yard scamper that put the Canes up 20-17 early in the fourth.
Franks answered, though.
And Florida’s defense stepped up again.
GUTSY CALLS
Florida converted all four of its fourth-down tries, but none of them was more important than Mullen’s fake punt early.
Punter Tommy Townsend ran for 6 yards on a fourth-and-3 play from the Florida 28. Kadarius Toney turned a screen pass into a 66-yard score on the next play.
The Gators scored again after Jeff Thomas muffed a punt. Van Jefferson recovered for Florida, and Franks found Lamical Perine over the middle for an 8-yard touchdown three plays later.
WOE-LINES
Both offensive lines struggled. Miami started two freshman offensive tackles, and it showed in giving up double-digit sacks. Florida had four new starters and finished with just 52 yards on the ground.
PREGAME SUSPENSIONS
Florida suspended four players , including safety Brad Stewart and defensive tackle Tedarrell Slaton, for the opener. The Gators also held out receiver Rick Wells and walk-on defensive back Pat Moorer for not living up to “the Gator Standard.”
Miami, meanwhile, suspended sophomore cornerback DJ Ivey for a “violation of team rules.” The Hurricanes also were without backup safety Bubba Bolden, who did not suit up for Saturday night’s game. The sophomore and Southern California transfer arrived on campus a little more than two weeks ago.
SPURRIER & MEYER
Former Florida coaches Steve Spurrier and Urban Meyer watched the game from a luxury suite alongside Gators athletic director Scott Stricklin. Spurrier serves as an ambassador to his alma mater. Meyer, who won two national championships at Florida (2006, 2008) and another at Ohio State (2014), is still receiving paychecks from the Buckeyes because he’s co-teaching a character and leadership class there.
So Meyer wearing a blue Gators polo was met with some raised eyebrows. Meyer also works as a Fox Sports analyst.
UP NEXT
Florida gets an early season bye week before hosting UT-Martin on Sept. 7. It’s the first of two games the Gators play against Football Championship Series teams.
Miami gets a week off before playing North Carolina on Sept. 7. It’s the first of three road games outside the Sunshine State for the Hurricanes.
___
More AP college football: https://apnews.com/Collegefootball and https://twitter.com/AP_Top25