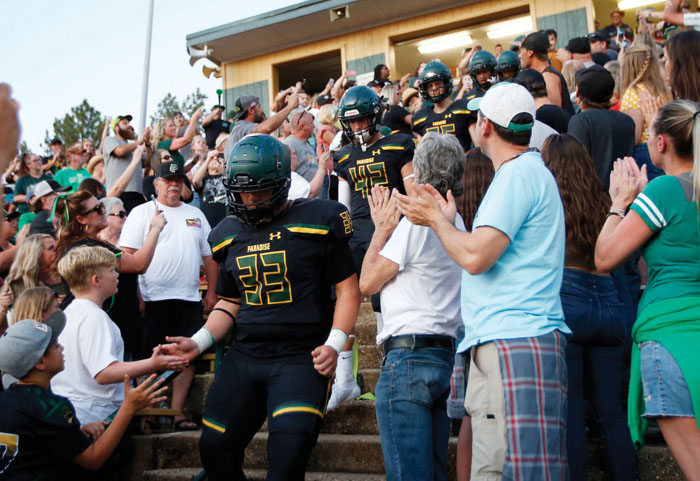 Paradise High School linebacker Tyler Hooks and his teammates run through the stands during the opening ceremony of their game against Williams High School, in Paradise, Calif., Friday, Aug. 23, 2019. This is the first game for the school since a wildfire that killed dozens and destroyed nearly 19,000 buildings including the homes of most of the players. (AP Photo/Rich Pedroncelli)

It is heaps of melted metal. It is scorched pine trees. It is a place where things used to be, before a fire destroyed nearly 19,000 structures and killed 86 people last November.

But on Friday night, Paradise looked like home again. Thousands of people filled the stands at Om Wraith Field at Paradise High School — which was spared from the flames — to watch the depleted football team play its first game since losing everything.

Girls wore ribbons in their hair and glitter on their faces. Boys wore jerseys with the sleeves rolled up. People stood in line to order hot dogs at the concession stand, only to be given a paper plate with a bun and told to walk around the corner and pick one off the grill.

“I recognize this,” 43-year-old Shannon Stoneman said as she looked around faces she had not seen in nearly 10 months.

Stoneman lost her home, her grocery store, her gas station, her favorite restaurant, and everything else she knew in the fire. She had to move more than 130 miles (210 kilometers) away, putting her two teenage daughters into another school. But when she heard about the Paradise High School football team playing again, she took the day off from work and came back to watch.

“Our hearts are here, even if our homes aren’t,” she said.

Senior running back Lukas Hartley could feel the pressure. In the first quarter, shortly after the team had entered the field through the home stands while Johnny Cash’s “God’s Gonna Cut You Down” played on the speakers, he threw up on the field as his emotions got the best of him. He sat out two plays, before returning and running over a defender to score a touchdown.

Paradise was up 7-0 when they started their  second possession. Senior wide receiver Mason Cowan lined up to the right side of the field and noticed the other team was not looking at him. He signaled to quarterback Danny Bettencourt, who hit with a 64-yard touchdown pass and the rout was on. Paradise would win the game 42-0.

“Everyone felt like, in a way that, we had the town on our back,” Hartley said. “We had the responsibility of winning tonight, so that’s what we went out here and did.”

For people to come back to Paradise, they have to have something to come back to. Local officials have worked hard to make that happen, and the school system has been a key part of that strategy. Paradise High School met all of the previous semester in an office building by an airport, but school officials worked hard to make sure the senior class graduated on the football field in May just like all the other classes before them.

Pam Beauchamp-Rioux, 51, moved away after losing her home but is still president of the Paradise Little League. Keison McMurray, 34, is living in a friend’s trailer but still coaches a youth football team.

“I think this (game) is going to show people that (Paradise) is not gone,” said 38-year-old Jennifer Siemens, who came to the field hours early to reserve a seat, hiding from the sun beneath a pink and blue umbrella. “So many people have donated and helped us from all over the country. Now they can see why, you know?”

Jamie Travis was one of the few who did not lose her home. She said the fire stopped about two blocks from her house. She stood near the south end zone on Friday night, a snow cone in her hand, watching friends return to the place she never left.

“It was just hard knowing all your friends and family lost everything and you didn’t,” she said. “Everybody is here again.”

After the game, the players huddled near the north end zone to celebrate. Coaches praised the players for winning, but said they had so many things to fix when practice resumes Monday. But that could wait.

“Here’s what I pray for you tonight, that you started a healing that’s going to continue for the rest of the season,” Assistant Coach Andy Hopper said.

The team stood up and lifted their helmets in the air as they yelled as one: “Brothers to the bone!”