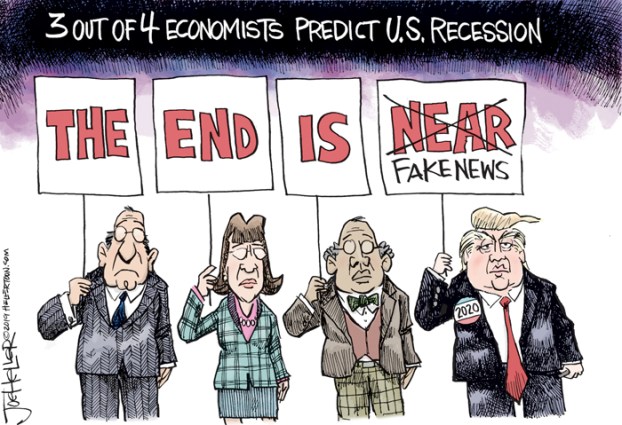 President Donald Trump knows his re-election depends heavily on a healthy economy. At a recent New Hampshire rally, he warned supporters that markets would crash and their savings would go “down the tubes” if he failed to win a second term. “You have no choice but to vote for me,” he thundered.

But here’s the contradiction at the core of his campaign: Trump’s own policies, especially his trade war with China, are directly threatening the vitality of the economy and his own political future. In this, and so many other ways, he is his own worst enemy.

The basic elements of the economy are still strong. Unemployment and inflation remain low. And while Trump was exaggerating, he had a point when he said recently, “We’re doing tremendously well. Our consumers are rich. I gave a tremendous tax cut.”

What he didn’t say is that warning signals are flashing red everywhere. As economic analyst Neil Irwin reported in The New York Times, “The chances that the nation will fall into recession have increased sharply in the last two weeks.”

Exhibit 3: The University of Michigan’s consumer confidence index dropped sharply to a seven-month low. Bloomberg writes that “consumer spending, the biggest part of the economy and largest driver of expansion in the second quarter, may be at risk of wobbling amid financial-market volatility and the trade war.”

Trump prides himself on being an unpredictable disrupter, a chaos creator, but uncertainty is absolutely the worst climate for business investment and sustained growth. With 1 in 3 economists now predicting a recession next year, the president’s erratic stewardship of the nation’s finances is the single biggest reason for their pessimism. “It is potentially a self-inflicted-wound type of recession,” economist Tara Sinclair of George Washington University told the Times.

Phil Levy, chief economist at the freight-forwarding company Flexport, added: “You end up paralyzed. You have to make plans, but there is risk all over the place, so businesses get cautious and hold back on investment.”

Trump and his aides are preaching the gospel of optimism, but they are clearly worried — even panicked. The president jawboned the Fed to slash interest rates another full point and delayed a new round of tariffs on consumer goods imported from China until after the holiday season. Trump confirmed reports that White House aides are discussing a payroll tax cut that could boost consumer spending before the election.

The reason for their alarm is obvious. The latest ABC/Washington Post poll shows that 51% of voters approve of Trump’s handling of the economy. On no other issue tested, from gun control and health care to immigration and foreign policy, did he command majority support. That ancient adage from the Clinton years has resurfaced again: “It’s the economy, stupid.”

An ABC report from Michigan’s Macomb County, outside Detroit — long a harbinger of swing-voter sentiment — emphasized that economic concerns were a main component of Trump’s success there in 2016. Michael Taylor, the Republican mayor of Sterling Heights, summed up the feelings of many Trump supporters: “Look, I want an economy that works for me, and this is a guy that, even though he’s a billionaire from New York City, he gets it, he talks to me.”

But Trump’s solid base of support is only about 37%. In a recent Fox News poll pitting the president against four leading Democrats, he never broke 40%. One critical reason is that former supporters like Taylor, who liked the president’s economic message, are fed up with his personal behavior.

“It’s the constant lying, it’s the belittling (of) his opponents and his detractors. It’s the childish nicknames that he gives people,” said the mayor. “I can’t tell you when the breaking point came, but it was at some point I was just like, ‘enough is enough’ for me.”

Trump needs voters like Taylor, in places like Macomb County, to win a second term. He needs them to believe that he still gets it, that his economic successes outweigh his personal failings. But the president’s own policies are raising uncertainty, lowering confidence and undermining his own prospects.

Sharon Randall: Tell me another story

Where do stories come from? Why do they surface in our memories at unexpected times and make us want to... read more