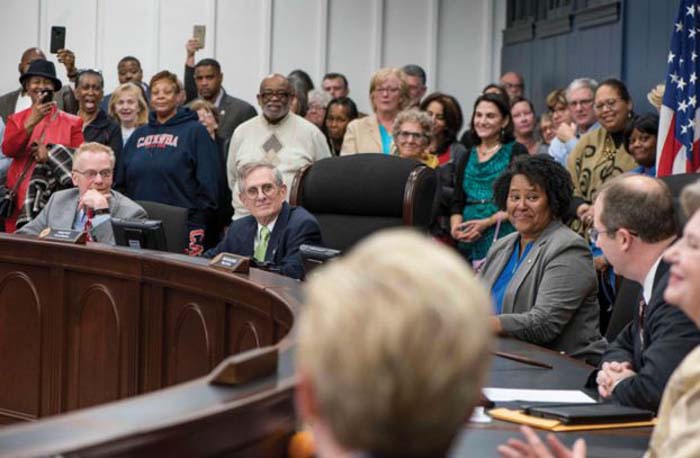 SALISBURY — In 2017, the top vote-getter in the Salisbury City Council election outpolled her opponent by 12 votes out of nearly 4,000 cast.

For Post, the outcome was for the best because he has said he did not have the time to serve as mayor, which is estimated to be a 30-hour-a-week job. Heggins became mayor in her first run for City Council.

Post said he has asked Heggins if the mayoral race was separate from the council race, which office would she run for, and she said for a council seat.

The City Council on Tuesday approved adding a referendum to the Nov. 5 municipal ballot to ask Salisbury voters whether the mayoral race should be separate from the council race. If the voters approve, the change would go into affect for the 2021 municipal election.

On Friday, Post spoke about the issue at the weekly Kiwanis meeting at the Salisbury Country Club.

Post supports a separate mayoral race, which he said would prevent an “accidental mayor.”

“Before I ran a few years ago, I wrote an editorial in the Salisbury Post talking about what I called an accidental mayor,” Post said. “And then Karen Alexander was elected, and I was elected in that election, and she was not happy with me having used ‘accidental mayor.’”

Post argued there have been accidental presidents such as Gerald Ford and Andrew Jackson. He said Salisbury is the largest city in North Carolina and the only municipality in Rowan County not to have a direct election for mayor.

Post said the city has been unlucky and lucky.

“When I’ve said unlucky, it’s because we’ve had some great community leaders that just didn’t have the time to do it,” Post said. “We’ve also been really lucky.”

Post listed one-term mayors who were burned out by the duties and mayors who served multiple terms.

“We need to have somebody, in my opinion, that wants to be mayor, is willing to devote the time and energy to it and properly represent the city of Salisbury,” Post said.

Post said if a separate mayoral election were in effect, Councilwoman Alexander, a previous mayor, would still be in that job.

Post said two other council members, Brian Miller and Tamara Sheffield, have jobs that would not allow them to serve in the extra capacity that comes with being mayor.

It voters approve a separate election, Post said the council will return to discuss other possibilities of restructuring. Some have argued for four-year staggered terms, which Post said he opposes to keep terms similar to those of the state legislature and U.S. House of Representatives.

The council also could potentially decide that the mayor is a nonvoting member except to break a tie, Post said.

He recommended that as the talks begin, residents show up at meetings and give their thoughts. A council committee looking at possible election changes that Post was part of had low turnout and repeated conversations at its meetings, Post said.

“This is not a multiple-choice test,” he said.

A Kiwanis member asked Post if he is the highest voter-getter in the coming election, would he then be able to serve as mayor.

“I have the time. If it happened, I could do it now,” Post said.