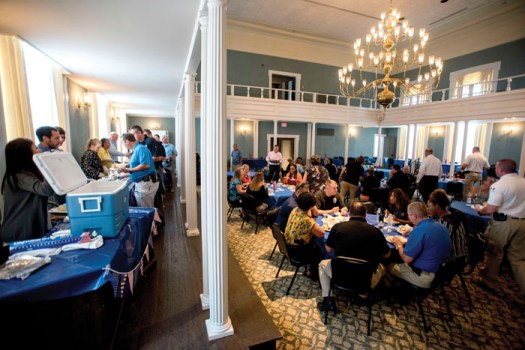 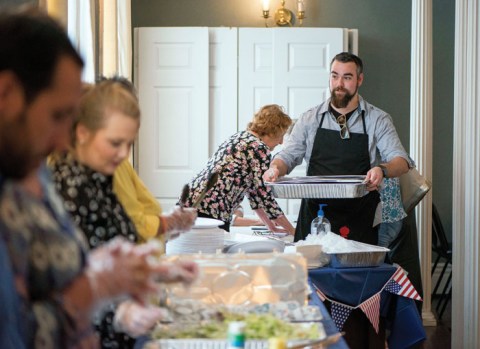 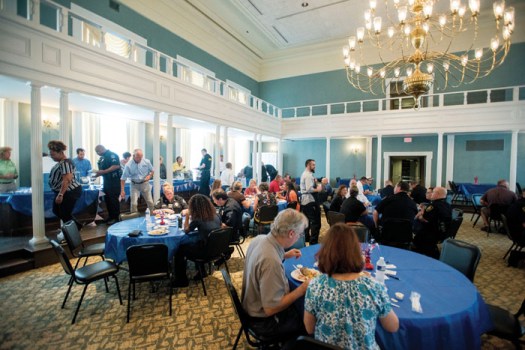 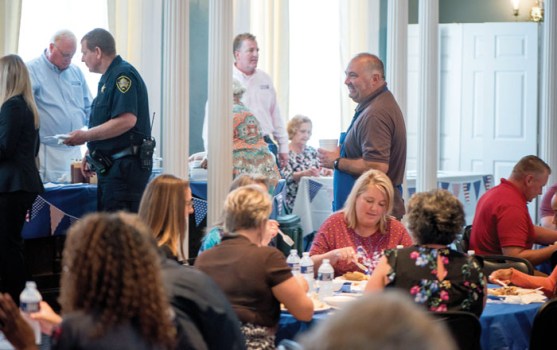 John Brendle, one of the chefs of the day, surveys the crowd. Jon C. Lakey/Salisbury Post 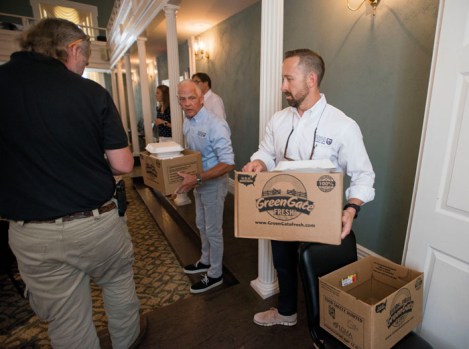 Matt Staton picks up a box of takeout orders to be delivered to the 911 Communications Center. Jon C. Lakey/Salisbury Post

SALISBURY — In hindsight, it might have been a good time to commit a crime, because much of the local law enforcement community took advantage of an annual appreciation lunch Thursday at the Rowan Museum.

For the record, the police officers, sheriff’s deputies, highway patrolmen, courthouse personnel, 911 staff, attorneys, judges, magistrates and probation-parole officers in attendance will tell you it’s never a good time to bend the law.

But you can set aside a moment for a nice home-cooked meal.

There are never any speeches or formal programs.

“It’s just come and eat and enjoy some fellowship,” said Russ Roakes, a funeral director at Powles Staton. “We want these folks to feel appreciated because they have a tough job.”

A free meal of grilled chicken, baked potatoes and salad was served. Brindle said they prepared for roughly 320 to 325 guests for the luncheon, offered from 11 a.m. to 2 p.m.

Brindle and Aldridge started the cooking at 6 a.m. Thursday, but the planning and buying of groceries took place earlier, of course. Roakes said he would love to have Brindle’s “secret homemade recipe” for barbecue sauce.

Greg Edds, chairman of the Rowan County Board of Commissioners, and Kaye Brown Hirst, former executive director of Rowan Museum Inc., combined their culinary skills and made the desserts — banana pudding and cherry pudding.

“It’s fun,” Hirst said. “There’s a great group of folks in here — the givers and the receivers.”

But the receivers — the law enforcement community — are definitely the focus, Hirst noted.

To-go meals were prepared and delivered for people who couldn’t leave their duties, including officers at the Rowan County Detention Center.

“We look forward to this event,” Roakes said, “and it grows every year.”

The first two appreciation luncheons were held at the Rowan County Fairgrounds. The past two have been at the museum, which is perfectly located, Roakes said, next to the courthouse and near the Rowan County Sheriff’s Office and Salisbury Police Department.

The funeral home started circulating word about the appreciation lunch Aug. 1. Roakes said he handed out fliers and visited Sheriff Kevin Auten and Deputy Chief Shon Barnes of the Salisbury Police Department to make sure their officers knew.

“It just grows by word of mouth,” Roakes said.

The lunch proved to be a hit with the recipients.

“It was fantastic,” Highway Patrol Trooper J.T. Simmons said. “It was a very nice gesture.”