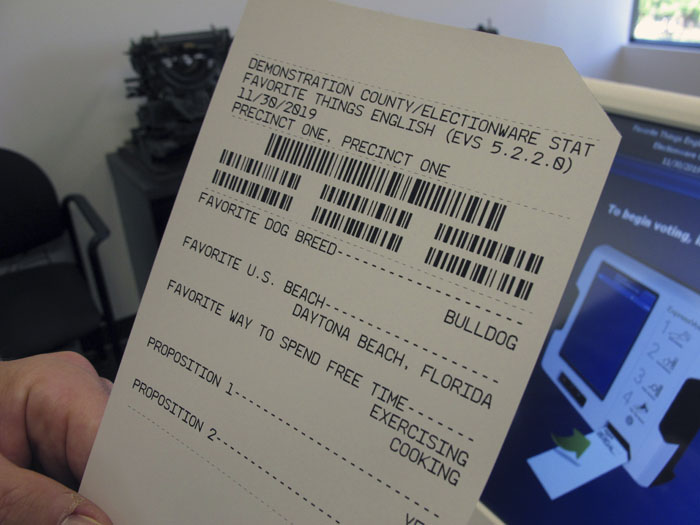 A ballot card with bar codes is used during a voting machine demonstration in Raleigh. Allen G. Breed/Associated Press

RALEIGH — North Carolina election officials on Friday certified bar-code ballots for use in elections starting next year despite an outcry that they can’t be trusted by voters uncertain their choices are accurately counted.

The State Board of Elections voted 3-2 to allow a voting-machine maker to sell equipment that digitizes votes into bar-code data, which is then tallied by the company’s counting machines. Almost two dozen speakers urged the elections board to reject bar-code systems because voters can’t read the bar codes to check that they are correct.

But Democratic board chairman Damon Circosta sided with two Republicans on the five-member panel, citing the risk of delay after touchscreen-only equipment is disallowed in December. New voting machines in about a quarter of the state’s counties need to be replaced as primary elections loom in March.

After hackers tried to access U.S. election systems in 2016, a study released last year by the combined National Academies of Science, Engineering and Medicine urged that elections use human-readable paper ballots that people can inspect and recount.

“The 2020 election is going to be very controversial. We need to make it a point to prove to the loser that he really lost,” said John Brakey, an Arizona-based election transparency activist. “We could get very dangerous in this country. I work hard to prevent that.”

People objecting to bar-code ballots are “inconsistent at best” because they accept the technology when it tracks their grocery purchases, Republican board member Ken Raymond said.

But public confidence in accurately recorded votes is a bigger concern than whether a checkout scanner correctly totals groceries, elections board member Stella Anderson said.

“We have heard voters don’t like this. Voters do not trust this, and that’s their judgment to make,” Anderson said. “Bar codes are not human-readable. The whole purpose of a paper ballot is to be able to recount or audit the voter’s votes in a way independent of any possibly hacked or buggy computers.”

The U.S. Senate Intelligence Committee last month released a report concluding all 50 states were targeted by foreign adversaries in 2016. The Russian government directed “extensive activity” against U.S. election systems ahead of the 2016 presidential election, said the committee, which is chaired by Sen. Richard Burr, a North Carolina Republican.

Special Counsel Robert Mueller warned during a congressional hearing in July that Russian election interference was continuing even today.

Counties also could select from equipment made by Clear Ballot of Boston and Hart InterCivic of Austin, Texas.

North Carolina has spent about two years studying which voting machines to allow for use over the next decade or longer.