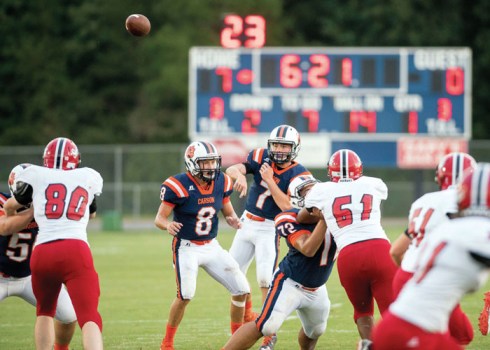 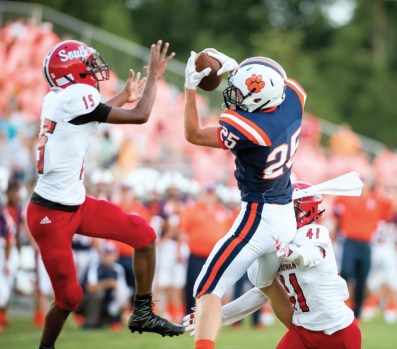 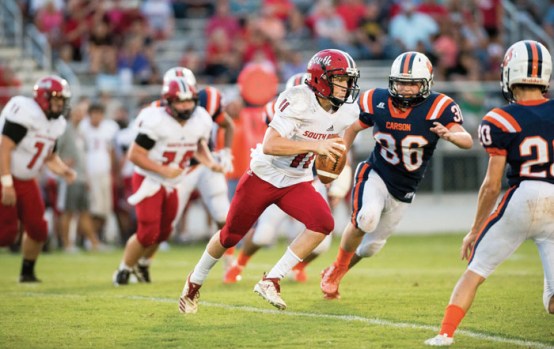 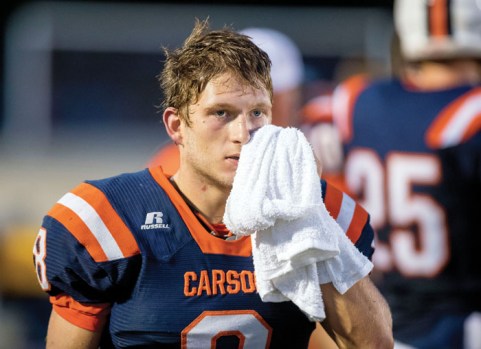 JON C. LAKEY/SALISBURY POST ... Carson’s Hunter Courtney (8) on the sidelines before halftime on Thursday night in China Grove. The running back set a new school record with 344 yards on 38 carries and three touchdowns. 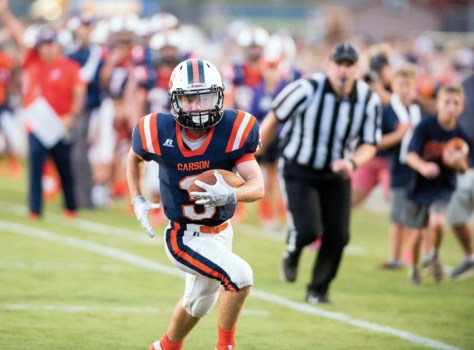 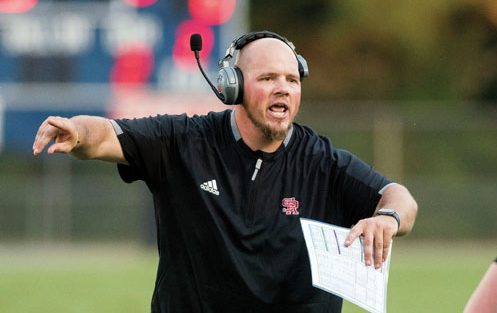 CHINA GROVE – It is impossible to predict how an opening night game in high school football will go.

Getting to witness the second best individual rushing effort in Rowan County history proved to be an unexpected treat for fans here Thursday night.

Carson senior running back Hunter Courtney ran over, around and through the South Rowan defense for a record 346 yards on 38 carries — scoring three touchdowns in the process. That performance was more than enough to lead the host Cougars to a lopsided, 56-20 win over the Raiders.

Courtney’s big night started with an electrifying 90-yard scoring run, followed by a 2-yard TD and then a 73-yard counter play, off left tackle, as the yards kept piling up.

By the end of the evening, Courtney had shattered the school record of 308 yards, set by Shaun Warren against Statesville in 2010, and came within 10 yards of the 356-yard, all-time county rushing record set in 2009 by West Rowan great KP Parks.

“I really didn’t know,” said a humble Courtney, after the game, when told about his record-setting effort. “But it is all about the team, it is not about me. It’s about family.”

Courtney came into the game just trying to get 21 yards to push him over the 1,000-yard career rushing mark. He took care of that, easily, on his first run of the game. Everything else just fell into place after that.

“I think what happened was the plays we were running, just kept hitting.” Courtney said. “So, we just kept going back to those plays and just kept running.”

The Cougars (1-0) hit South (0-1) with a buzzsaw right out of the gate, as they led 21-0 quickly, and 42-12 by halftime. In addition to Courtney, Carson enjoyed an efficiently stellar night from junior quarterback Alex London as well. He directed the offense flawlessly, while connecting on just 4-of-6 passes for 80 yards. But three of those throws went for touchdown passes.

All of that offense impressed new Cougars’ head coach Daniel Crosby, in his debut, but he also gave glowing reviews to his offensive line. “You take what the defense gives you and our guys up front did a phenomenal job all night,” Crosby said.

So what about those 56 points produced by his offense? “As a coach you like to think your team can do that, but realistically, no I didn’t expect that,” he said. “I knew coming in we were prepared to win 3-0, or whatever, but all of our guys were ready and did what they were supposed to do.”

One aspect of the Cougars’ win that caught South off guard was the use of pooch kickoffs. Carson opened the game with a short kickoff that South recovered. But after CP Pyle picked off Raiders’ quarterback Drew Huffman at the Carson 10-yard line, the stage was set for Courtney’s 90-yard TD run.

Another pooch kickoff followed and Carson recovered that one, leading to an 8-play, 41-yard drive. London connected over the middle with receiver Jake Harris for a 14-yard TD pass to quickly make it 14-0.

Then they did it again. Another short kickoff was pounced on by Carson’s Zeb Burns at the South 36-yard line. The Cougars scored again on a 2-yard Courtney run, padding the score to 21-0, still in the first quarter.

The Cougars’ onslaught continued in the second quarter, after the defense stopped South on fourth down at the Carson 27. Courtney broke a counter play off left tackle and was off to the races for a 73-yard TD and 28-0 lead.

South’s option attack finally got untracked in the second quarter behind versatile quarterback Huffman, as he hit Logan Perry for a 40-yarder to the Carson 20. Halfback Brayden Garrett scored three plays later from close range, making it 28-6. The conversion pass failed.

But Carson had an answer every time, as Pyle raced 19 yards for a touchdown, then London found Brodie Johnson wide open on the left side of the end zone late in the half, making the margin 30 points at intermission.

The third quarter was chewed up by a pair of punts and an exchange of fumbles. South finally broke through with 1:14 left in the period, when Huffman connected with Chrismon again for a 5-yard TD pass. The two also connected on a two-point conversion pass.

Any comeback hopes harbored by the Raiders were dashed when London executed a play-action pass over the middle to Harris for a 43-yard scoring dagger. Carson wrapped up the scoring late in the game when reserve Alex Stirewalt broke several tackles on his way to a 36-yard TD run.

Both Crosby and Courtney pointed to the work the team began last March to prepare for the new season, after a disappointing 3-8 campaign last year. “Our kids bought in and they believed everything we told them,” Crosby noted. “It is just special for them and all their hard work. We knew we had our sights set on tonight.”

Courtney echoed the same sentiments. “We have been waiting for this moment since all summer, “ he said. “It finally came and we took it and did what we had to do.”

Carson gets back into action next Friday with a tough test at Salisbury (1-0).

South Rowan will have to stew on the loss for an extra week with an open date,  before hosting East Rowan on Sept. 6.

NOTE: The Raiders did get a well-rounded effort from Huffman, who passed for 109 yards and the two scores, while rushing for 116 net yards on 20 carries. His numbers were negatively impacted by six Carson sacks (-26 yards), including two by sophomore linebacker Carter Dowd.