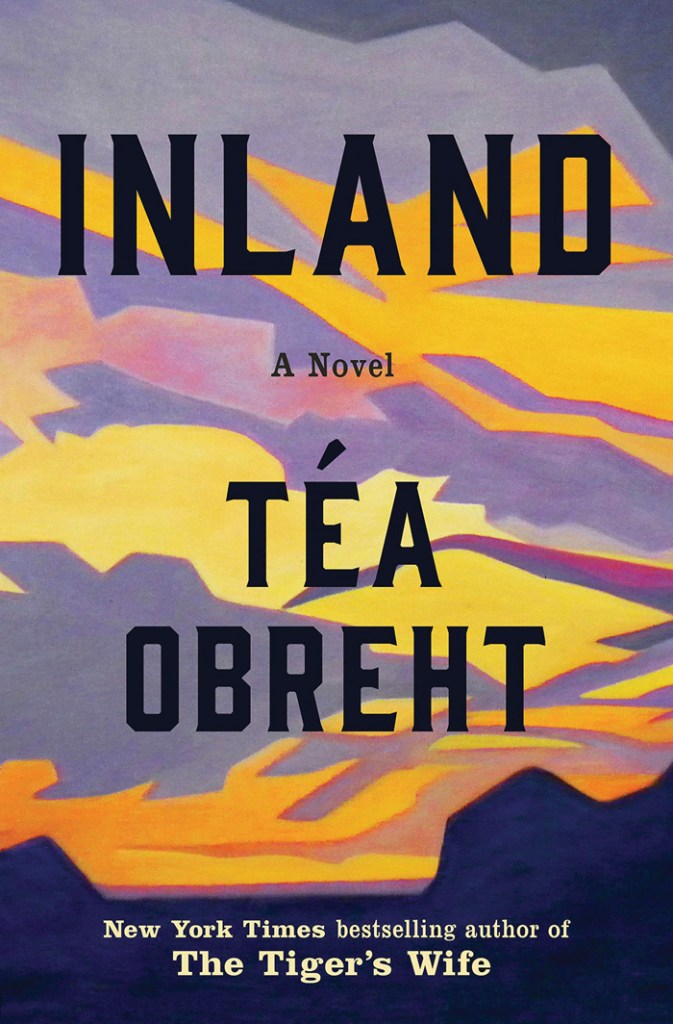 For an unforgettable journey into the West as it was, untamed, desolate at times, unruly, look no further than Tea Obreht’s striking “Inland.”

This marvel of a saga is told by a master of prose. Obreht used a folk tale for her debut novel, “The Tiger’s Wife,” and filled the pages with imagination and real longing, identifiable emotions in a strange landscape.

Here, the landscape has its longings, as well. Chiefly, water. In a parched Arizona of 1893, a homesteading family struggles mightily to hold on to their land, to their goals, and their varied parts.

In many other parts of the West, a man who goes by many names finds adventure, then danger, reprieve, then descent in his trek to avoid a marshal who will hang him for murder.

Don’t be fooled by descriptions of what this book is about. They are pitifully incomplete. And don’t imagine this turns into some Western romance novel, either. These are hard people, living hard lives, swallowing lies and skirting accusations just to survive.

And the land itself struggles to survive, without water for so long, baking in the heat, momentarily beautiful, then terrifying. The dark is all consuming. The light shows the cracks in every wall and foundation, be it houses, land or people.

Obreht uses history in the novel, about the Camel Corps the U.S. Army thought could tame the West, land, Indians, drought and all.

She creates Nora, as tough a woman as you’ll meet. She’s determined to survive, though she has suffered unbearable loss. She fights for what she believes, and to hell with what you think. Here, too, is her mysterious husband, absent for so long in search of water, that we never really get to know him. He’s an inconsistent farmer and struggling newspaper man, trying to keep his Amargo Sentinel viable, compromising himself trying to please those who can never be pleased.

We hear Nora tell of their sons, strapping boys, totally different, but tending towards fights to solve problems. They are wild as the country around them. And we meet young Toby, partially blinded by a fall from a horse and a lack of medical attention. Josie, the servant girl is quite a puzzle, too, claiming to talk to spirits. She and Toby swear they have seen an unspeakable beast hovering around the homestead. Practical and pragmatic Nora will have none of it.

There’s a doctor with big demands, a sheriff whose own past is clouded. And there’s Merrion Crace, an evil, land-grabbing, life-ruining nightmare of a cattle baron.

But Nora is alone in her fight against the world.

So is Mattie Lurie, the wanted man, who starts life as a grave robber. He falls in with a group of rabble rousers and thieves, and kills a man. When one of the gang dies, it lays heavy with Lurie, who carries the dead man’s wants with him. In fact, everywhere he goes, he see the people who died with wants.

He’s injured and betrayed and takes up with an improbable group, the camel corps, where he meets other men who are tossing about the West, hailing from around the world. And he meets the camels, the smelly, ugly, magnificent beasts that will become part of the weird family he creates.

Obreht tells some of Nora’s story, then lets Lurie tell some of his, to his camel, whom he calls Burke.

While Nora’s story takes just a few days, Lurie’s goes on for a considerable time, filled with dangers and distractions. That marshal keeps finding him, even though now he says he’s a Turk (true) named Misafir. How can two men in the wide, unexplored world of the West keep finding each other?

Lurie’s tales, though often violent, are somehow lyrical, in the way he loves this country and even his camel; nothing good falls his way for long, of course, but he just picks up and goes, again and again, telling his stories, enjoying the good times, knowing they will end.

Nora, in contrast, is in a hotbox of anger and want. Waterless, her thirst becomes almost another character. She’s tough and exacting. She has to be to hold what little she has left together. Her stories are full of grit, regrets, compromises and deeply hidden guilt.

Near the end of the novel, it seems Nora might be going mad — all she knows and can’t  or won’t tell, all the burdens now hers, the pressures from men who want her to give up, and betrayal from one person she thought was on her side.

Reading the book, you’ll become hot and thirsty with Nora, then bruised and embattled with Lurie, or Misafir. You cannot imagine what the two have to do with each other.

And when it is revealed, the story becomes even more remarkable and poignant. This is where Obreht brings out the marvelous, improbable revelations; this is where paths intersect in the most amazing way.

The final chapter, the last few pages, will leave you breathless. Obreht has created magic again, in the most plain and solid way such a book should end.

Maybe you should read it again, now that you know. There are worlds of meaning in the pages.