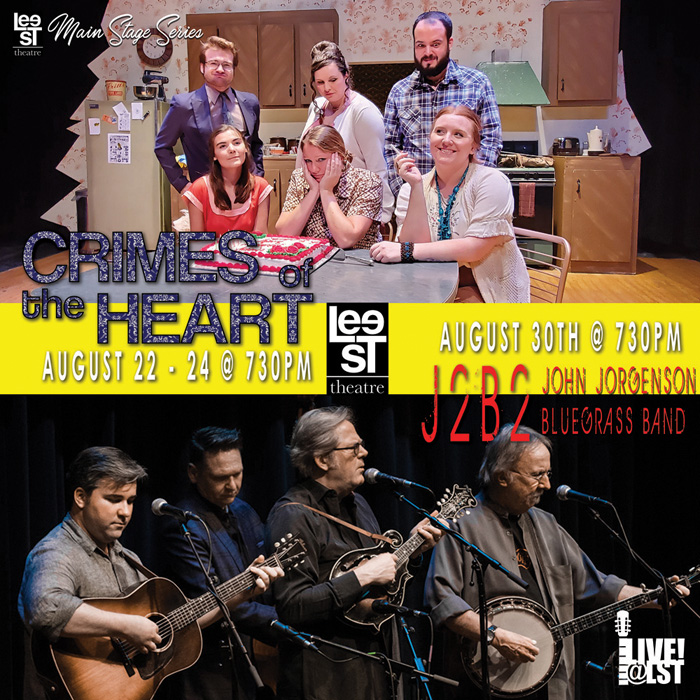 Lee Street theatre is excited to continue Season 12 with its first main stage series production this weekend, Beth Henley’s “Crimes of the Heart;” Also, gearing up next weekend the LIVE! @ LST Concert series opens with J2B2, the John Jorgenson Bluegrass Band. ‘Crimes’ runs this weekend Thursday through Saturday, Aug. 22 through 24 at 7:30 p.m. J2B2 will be performing Friday, Aug. 30 at 7:30 pm. All tickets for all events for this season are available right now at leestreet.org

“Crimes of the Heart” tells the story of the three Magrath sisters, their troubles, grave and yet somehow hilarious, and how they escape the past to seize the future—but the telling is so true and touching and consistently hilarious that it will linger in the mind long after the curtain has descended. Director Heather Wilson-Bowlby has crafted a show that will have you in stitches and will warm your heart as you leave the theatre. Cast includes Annie Boger as Lenny, Skyler Sanders as Meg, Krissey Browder as Babe, Allison Proba as Chick, Hoke Pittman as Doc and Maxwell Greger as Barnette.

John Jorgenson’s band, J2B2, is an all-star bluegrass supergroup featuring four legendary award-winning musicians: John Jorgenson, Herb Petersen, Mark Fain, and Patrick Sauber. Delivering bluegrass like no one has ever heard it before, the bands outstanding live shows have received stellar reviews and have left the bluegrass world buzzing with excitement. The four combine forces to form a spot-on union of impeccable musicianship, incomparable songwriting, incredible harmony vocals, and seasoned showmanship. This is the “high lonesome sound” of American roots music at its finest. J2B2 has created quite a buzz, and the International Bluegrass Music Association is among the many giving the band’s live performance high marks. The IBMA noted, “There was a warmth, and storytelling, and lots of laughter as this fresh band of legends made their debut…but with their expertise combined, you would think they had been playing in this configuration for years.”

Also, Lee Street’s own improv Comedy Troupe “Now are the Foxes” will be returning the next night, Aug. 31, to ramp up our Spotlight Series for an evening of Improv Comedy. With a family friendly show at 7 p.m. and an adult show at 9 p.m., these hilarious and talented performers will leave your sides hurting from laughter as they bring you improv comedy at its best!

Lee Street theatre’s Season 12 is bringing you more of what you want! Tickets for all of our Season 12 main stage productions, concerts, and our spotlight series can be purchased online at www.leestreet.org or by calling the box office at 704-310-5507.