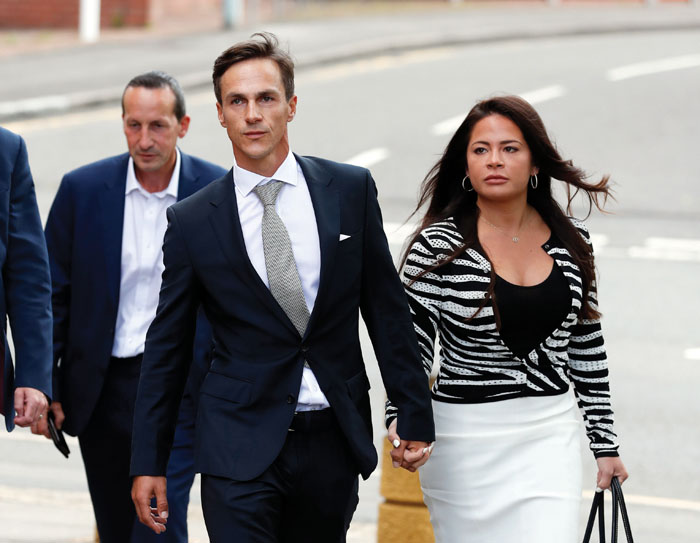 Danish golfer and Ryder Cup winner Thorbjorn Olesen, left, arrives with an unidentified woman at Uxbridge Magistrates court in London, Wednesday, Aug. 21, 2019, after being charged with sexual assault, being drunk on an aircraft and common assault. Olesen was arrested on 29 July after returning from the WGC St Jude Invitational on a flight from Nashville to London. Police were waiting for the 29-year-old when the aircraft landed at Heathrow.(AP Photo/Alastair Grant)

UXBRIDGE, England (AP) — Danish golfer Thorbjorn Olesen is to face trial after being charged with sexual assault and being drunk on an aircraft.

The 29-year-old Olesen indicated he would plead not guilty to the offenses when he made a brief appearance at a magistrates’ court in Uxbridge, west of London, on Wednesday.

Olesen, who is ranked No. 65 and was a member of Europe’s Ryder Cup-winning team in 2018, was arrested on July 29, immediately after returning to London from a World Golf Championship event in Tennessee.

Olesen, a five-time European Tour winner, has also been charged with assault by beating. He spoke only to confirm his name, address, date of birth and nationality, as well as indicating not guilty pleas. He was granted unconditional bail and is expected to appear at Isleworth Crown Court on Sept. 18.

Olesen has been suspended by the European Tour pending the outcome of the case.

RENO, Nev. (AP) — The PGA Tour’s Barracuda Championship is looking for a new home after the private club that’s hosted the event since it began in Reno in 1999 pulled out.

Montreux Golf & Country Club’s board of directors voted last week against holding the 2020 event at the mountain course between Reno and Lake Tahoe.

Board Tim Slapnicka said the decision was made after a months-long review based on the impact on club finances, facilities, members and homeowners.

Next year’s event is scheduled to run the Fourth of July weekend for the first time, July 2-5, due to the Summer Olympics in Japan.

Tournament director Chris Hoff told the Reno Gazette Journal they’re exploring alternative venues in the market. He said Barracuda is close to finalizing renewal of its title sponsorship of the PGA Tour stop in Reno.

, the only one that uses a modified Stableford scoring system.