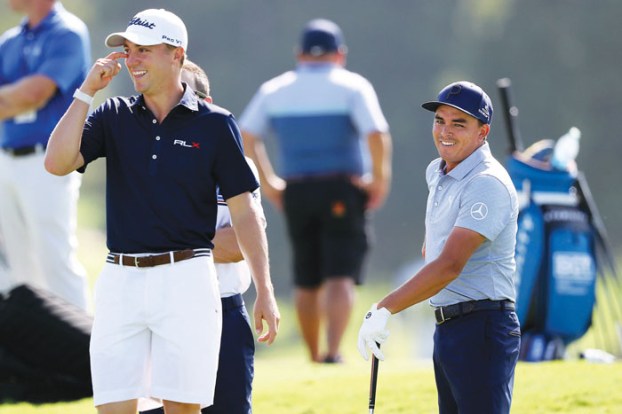 Justin Thomas, left, shares a laugh with Rickie Fowler as they prepare to play a practice round for the Tour Championship golf tournament in Atlanta, Wednesday, Aug. 21, 2019. (Curtis Compton/Atlanta Journal-Constitution via AP)

Thomas keeping an eye on two sets of scores at championship

ATLANTA (AP) — The PGA Tour wanted a format that eliminated two winners on Sunday at East Lake — the Tour Championship and the FedEx Cup. The new system means whoever has the lowest score to par wins the FedEx Cup.

In the eyes of some players, that might not be enough.

As the No. 1 seed, he starts Thursday at 10-under par with a two-shot lead under the staggered start. It’s possible that Thomas could finish the most under par and win the FedEx Cup, even though he doesn’t have the lowest 72-hole score.

And yes, he will be paying attention.

“You guys probably won’t believe me, but, yeah, it will irk me,” Thomas said of such a scenario. “I want to beat everybody every week I play.”

He thought back to 2017, when he won five times, including his first major. Tiger Woods, Vijay Singh and Nick Price were the only players in his lifetime to win six times in a PGA Tour season, and Thomas wanted to be on that list.

“I was (ticked), to be perfectly honest, that I didn’t win,” Thomas said. “I think a lot of people were shocked and a little upset about how I handled just winning FedEx Cup and $10 million. But, I was like, ‘Man, I lost a golf tournament by one and I didn’t birdie 18, a par 5.’ And I felt like I should have won the tournament. … My competitive nature is never going to be OK with losing by one, even if I get a consolation — a really, really good consolation at that.”

Patrick Cantlay, the No. 2, could appreciate the feeling.

“I’d be totally elated to win and happy and feel like I did what I set out to do,” Cantlay said. “And then if I heard later that somebody edged me by a shot for the week or something like that, I’d be a little bummed or miffed. Obviously, there’s no real prize — other than world ranking points — for having the lowest total this week. So the No. 1 goal is finishing on top of the leaderboard.”

PLAYER OF THE YEAR

Ballots will go out to players Monday to vote on PGA Tour player of the year, and it would seem to be an easy choice.

Brooks Koepka has won three times this year, including a major (PGA Championship) and a World Golf Championship (FedEx St. Jude Invitational). He has been No. 1 in the world since May 19 and most likely will stay there the rest of the way. He won the money title. Along with his PGA Championship title, he was runner-up at the Masters and U.S. Open, and tied for fourth in the British Open.

Rory McIlroy is at least trying to make a case.

By winning the FedEx Cup this week, he officially would have three wins, including The Players Championship. McIlroy already has 13 top 10s out of the 18 times he has played on the PGA Tour, making this is most consistent year on tour.

“Brooks won a major and competed in all the other ones, as well,” McIlroy said. “But I think it goes back to what’s the player of the year rewarding? Is it rewarding a few weeks? If I were to play well or win this week, it would be my 14th top 10. I feel like I’ve been very consistent.”

Then he paused and smiled.

“It’s like I’m sitting up here trying to make an argument for myself to win,” McIlroy said. “But if that were the case and I wasn’t to win, I would understand why Brooks would still … he’s had a lot of other great golf and great finishes. So I’d completely understand if people went that way.”

Rory McIlroy is closing in on $50 million in career earnings on the golf course, and that’s only from the PGA Tour.

“And then I got home, and I went to get money out of the ATM — 18 years old, I have a debit card,” he said. “Put it in the ATM, and it’s like, ‘Would you like to check your balance?’ I checked my balance, and I was like, ‘Oh, wow.’ I went straight to the jewelry store and bought myself a watch.”

Justin Thomas never paid close attention to money, except for the 2014 season when he was on the developmental tour and received an exemption to the Memorial. He was going along well in the final round until a double bogey on the last hole sent him from a tie for 19th to a tie for 37th.

He realized that would cost him, but he didn’t look up to see how much.

His mother did that for him.

“I got a text from my mom the next day, ‘That double bogey on 18 yesterday cost you $42,000.’ I was like, ‘Mom, if you ever send me a text like this again, I will delete your number. Don’t ever text me something like this.’ That was something where — especially in a text message where you can’t hear the tone — you just look at it. You’re like, ‘Really? Did you need to send that?’

“I think the first couple years as a pro, when you start getting paychecks, you think about it,” he said. “But I’ll never forget that. It was pretty funny. I think she got a pretty good idea from the text I sent back to never bring it up again.”