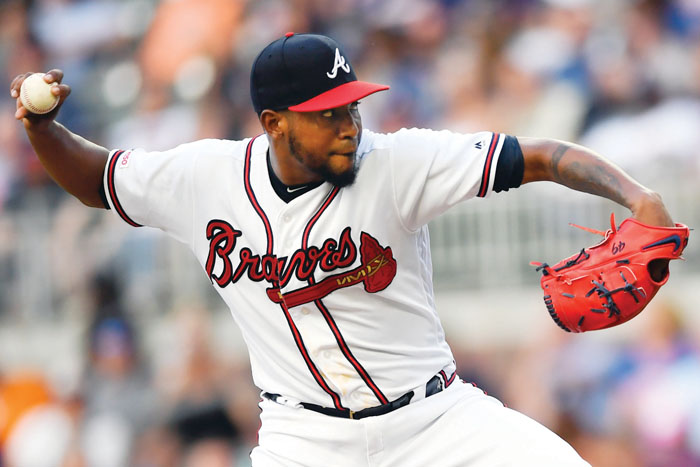 ATLANTA (AP) — Adeiny Hechavarría and Ronald Acuña Jr. each hit a two-run homer, Julio Teheran struck out a season-high nine and the Atlanta Braves beat Miami 5-0 on Wednesday night to continue their mastery of the Marlins.

The Braves are 14-4 against Miami this year after winning the 2018 season series between the NL East rivals 14-5.

Teheran (8-8) combined with Sean Newcomb and Josh Tomlin for a seven-hit shutout. The right-hander allowed five hits in seven innings.

Teheran improved to 3-0 against Miami this season and rebounded nicely from the shortest start of his career. He lasted only 1 1/3 innings while allowing six runs in a loss to the New York Mets last Thursday.

Acuña’s shot off Caleb Smith (8-7) in the fifth cleared the center field wall. His team-leading 36th homer came one night after he was hit by Elieser Hernandez’s first pitch, leading to the ejection of Braves manager Brian Snitker.

The first-place Braves, who had no singles or doubles among their three hits, have won four straight. The last-place Marlins have dropped five in a row.

Tyler Flowers and Hechavarría provided power from the bottom of the Braves’ lineup in the second. Flowers’ triple over right fielder Brian Anderson drove in Josh Donaldson, who walked. Marlins rookie second baseman Isan Díaz dropped the relay throw from Anderson, robbing Miami of a possible play on Flowers at third base.

Hechavarría followed with a homer into the left field seats for a 3-0 lead. It was his sixth homer and his first since signing with Atlanta on Friday following his release from the Mets.

The Marlins allowed a home run for the 22nd consecutive game, extending their team record.

Smith led off the third with a double to left field for his first career extra-base hit. He then doubled down the right field line with one out in the fifth. Teheran has allowed 12 hits to pitchers this season, most in the majors.

Acuña is still looking for the stolen base he needs to reach 30-30 status. He has 29 steals and was picked off by Smith while trying to swipe second base in the third inning.

Marlins: RHP Pablo López (right shoulder strain) allowed two runs, one earned, in six innings for Triple-A New Orleans against Omaha as he moved closer to a return to the rotation. He gave up eight hits and no walks.

Braves: C Brian McCann was placed on the 10-day injured list with a left knee strain. Snitker said McCann “feels a little better than he thought he might, so that’s encouraging.” C Alex Jackson was recalled from Triple-A Gwinnett. … SS Dansby Swanson (foot) will start a rehab assignment with Class A Rome on Thursday with a plan to be the DH in his first game, play seven innings in the field his next game and then play a full nine innings. … OF Austin Riley (knee) begins his rehab assignment with Rome on Friday.

RHP Mike Soroka (10-2, 2.41 ERA) will try to protect his perfect record against Miami when the Braves and Marlins complete the three-game series Thursday night. Soroka is 2-0 with a 0.68 ERA in four career starts against the Marlins. RHP Sandy Alcantara (4-11, 4.35) is scheduled to start for Miami.

Corbin (10-5) struck out four and walked two while throwing 93 pitches to help the Nationals maintain their lead atop the National League wild-card standings.

Joe Musgrove (8-12) gave up six runs and seven hits in five innings as Pittsburgh lost for the 29th time in 37 games since the All-Star break.

ST. PETERSBURG, Fla. (AP) — Kevin Kiermaier drove in four runs, including a solo homer during a two-run ninth inning, and the Tampa Bay Rays avoided a three-game sweep by beating the Seattle Mariners 7-6 on Wednesday.

Kiermaier tied it at 6-6 on a leadoff homer against Matt Magill (3-1). The Rays then loaded the bases on Willy Adames’ single, a double by Mike Brosseau and an intentional walk to pinch-hitter Ji-Man Choi with no outs before Magill’s wild pitch with Tommy Pham batting allowed Adames to score the winning run.

MINNEAPOLIS (AP) — Lucas Giolito pitched a three-hit shutout of the second-highest scoring team in the major leagues, racking up 12 strikeouts as Chicago took the series from AL Central-leading Minnesota.

Giolito (14-6) allowed only runner past first base, a double by Jonathan Schoop in the eighth. The 25-year-old fanned Jake Cave to finish that inning and reach double-digit strikeouts for the third straight time, the first White Sox starter to do so since Chris Sale did so in eight consecutive turns in 2015.

Giolito matched Cleveland’s Shane Bieber for the major league lead with his third complete game of the season. The White Sox and Indians have a baseball-best five apiece. Giolito got his with 115 pitches, without a walk.

BALTIMORE (AP) — Baltimore tied a major league record by allowing its 258th home run this season but hit four of its own to beat Kansas City.

Anthony Santander and Renato Núñez hit back-to-back home runs in the fifth inning for the Orioles, who won their first series since July 25-27 at the Los Angeles Angels. Jonathan Villar and Hanser Alberto also went deep.

Whit Merrifield’s homer was the record-tying blast against Baltimore. The Orioles have 35 games to surpass the 2016 Cincinnati Reds for the most homers allowed in a season.

Castillo (12-5), who allowed nine hits and eight runs on Friday against St. Louis, bounced back to limit San Diego to five hits and one run with four strikeouts.

The Reds sent nine batters to the plate while scoring three runs in a third inning, started by Eric Yardley (0-1), who got the loss in his major league debut.

Melville (1-0), a 29-year-old right-hander with just six previous big-league appearances who started this season in independent ball, limited Arizona to a first-inning double and a sixth-inning home run to go with four strikeouts and two walks. He also picked up his first major-league hit — a two-out, fourth-inning single — and his first two career RBIs.

Ketel Marte and Alex Avila homered for the Diamondbacks, who had their four-game win streak snapped.

The Rockies jumped on struggling Arizona starter Mike Leake (9-10) early with two runs on three straight singles and a fielder’s choice in the top of the first.