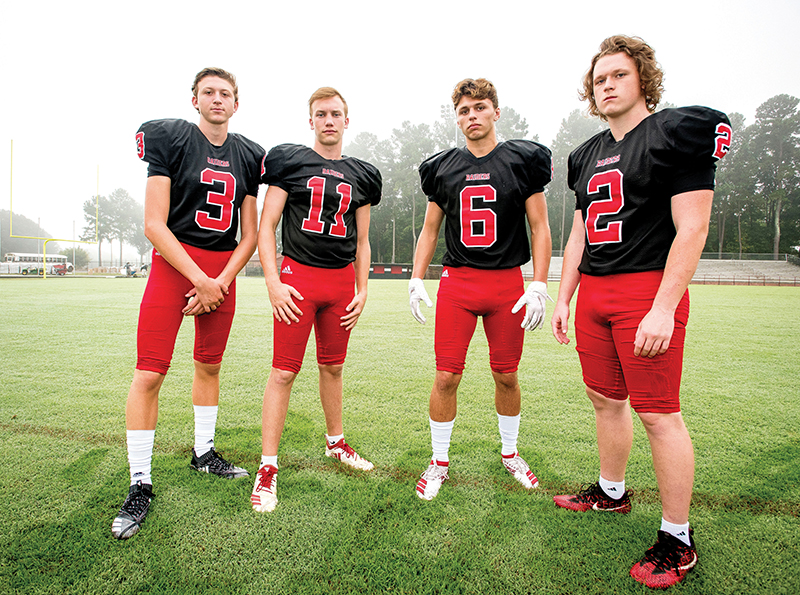 LANDIS – It has been a long time since the football glory days at South Rowan, but fifth-year head coach Daniel Yow feels his Raiders are on the right path.

“For the first time since I have been here, I can certainly see the culture changing,” Yow says. “I am so close to it that subtle changes don’t mean that much to me but this year, there have been leaps and bounds with our players.”

Yow had to endure a couple of winless seasons at the beginning, but the wins have now started to come, including three victories in the 2A Central Carolina Conference last season. He and his Raiders staff focused on off-season work, hitting the weight room and emphasizing the fundamentals.

South starts the season with 8o players in the total program, including 13 starters and 25 lettermen. “We have a core group of 20 to 25 kids who don’t play anything but football,” Yow said. “And they have bought into the program, working their tails off in the weight room since November.”

Part of the process was a unique exercise back in late July at a team retreat when Yow had his players write down all of the excuses they could think of for why they would not succeed as a team, as an individual player and as a student. The players then went to the practice field and tossed the excuses unto a burning barrel.

“That was huge for us as a bonding experience as a team,” Yow said.

The Raiders kick off the 2019 campaign this Friday at Carson, with a lot of experience at skill positions on their pistol option offense, a solid group on the defensive side and even some transfers that will help right away.

The centerpiece on offense is senior quarterback Drew Huffman (6-0, 160), who led the county in total offense (per game) last season with 494 rushing yards and 1303 passing yards. He threw for 10 TD passes, but the glaring number was 20 interceptions.

“Yeah, I definitely have to cut those turnovers down,” says Huffman. “I have been working on my accuracy and being able to stay in the pocket more and trust my offensive line. But I think we are going to quite a bit better than in past years.”

Yow has full faith in his quarterback. “He knows our offense almost as good as I do,” Yow says. “He is a good runner and he can make all the right reads and all the right throws. It is a matter of execution.”

Huffman has two experienced receivers to rely on in seniors Austin Peacock (6-2, 175) and Logan Perry (5-10, 155). At the slot position, sophomore Nathan Chrismon (last year’s JV quarterback) is a versatile athlete who can run and catch equally well. Also at receiver is junior Jackson Deal, who is also the team’s punter.

The primary running back in the option is senior Brayden Garrett (5-9, 190), who transferred back from AL Brown after spending his first two seasons at South.

“Our biggest hang-up right now is offensive line,” Yow says. “We only have one returning lineman in center Dawson Mushala (5-6, 210), so we have to build from there.”

The Raiders do have two seniors who were lost to injury last year — Jacob Lancaster (242) and Austin Barnes (240), plus a promising sophomore in Hector Bernal (5-11, 245) at guard. Possible help comes from senior tackle Jorge Benetiz, a transfer from Carson.

On defense, the Raiders will operate out of their usual 4-4 formation under new defensive coordinator Hunter Moody. “Overall, we have some good depth but not a lot of varsity experience.” Yow says.

The true experience up front comes from senior three-year starter Remington Steele (6-0, 245). “I really like the competition,” Steele says. “When I step on the field, I want to be the very best I can at all times. My main job is getting to the quarterback. Overall, I think we have some talent on defense and I am excited to see what we can do.”

Junior Kam Wallace has been a leader at linebacker, along with junior Kyle Juncho (190). The most pleasant surprise has been senior inside linebacker John Stoddard (6-0, 190), who showed up on the first day as a transfer from Washington, D.C.

“On his very first live play, he scrubbed down the line and made the tackle,” Yow said, of Stoddard, “so we knew right then, he was a starting linebacker. He brings what we need on defense — quickness and a lot of energy.”

In the defensive backfield, the key players are junior Ward Bond at corner and sophomore Gabe Pozyck at safety, once he recovers from illness.

“Overall, I feel we will be a very competitive team that can surprise some people,” Yow said. “The squad we have in our locker room right now, I would put them up against any team on our schedule. I have a lot of faith in our guys.”

Raiders at A Glance

Post-Season: did not make 2A playoffs

Austin Peacock – Senior WR, S (6-0, 175) – elected team captain he is an experienced receiver who will be a primary target in the option offense.

Nathan Chrismon – Soph., Slot, QB (5-8, 175)- last year’s JV quarterback with a lot of speed and field knowledge. Brother of former Raider Austin Chrisman (now UNC wide receiver). Solid as a runner and receiver who will back up Huffman at QB