HS football: Carson hopes to move up under new coach 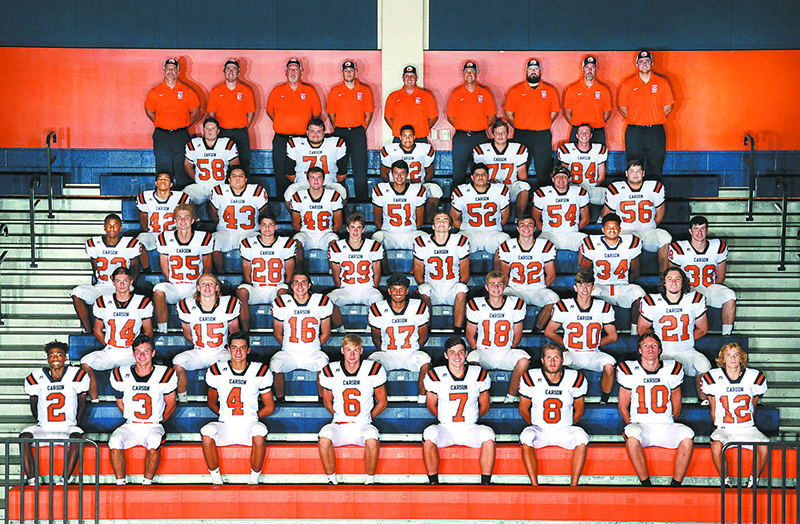 That’s about the only way to put it. The county’s smallest group of returning starters greeted new head coach Daniel Crosby, the former South Rowan High linebacker/fullback, when he was hired in February.

“Guys bought in to everything I asked and we’ve had a very good off-season,” Crosby said. “Our players have done a good job of learning a new offense and a new defense. Support has been great from the school and the community. We’re excited.”

Except for the rivalry games with East Rowan and South Rowan, excitement hasn’t been widespread the last few years. Carson lost eight games in each of the last three seasons and hasn’t come out on top in a 3A state playoff game since 2010.

Carson did experience 7-5 seasons in  2013 and 2015 under former head coach Joe Pinyan, but it would appear the program is at least a year away from getting back to that level.

In the six-team North Piedmont Conference,  Carson is 3-7 in the two seasons since realignment. The stoutest programs in the league are South Iredell, Statesville and West Rowan. Carson lost to that trio by at least three touchdowns a year ago, so there’s some catching up to do.

“We have a small senior class, so we’re going to be a very young football team,” Crosby said. “But we’ve got good numbers in the program, as a whole, and we’ve got a big junior class of 23.”

Carson has been a run-heavy team during the Pinyan years, but the Cougars will be more balanced. They’ll be using a lot of one-back sets with three or four wideouts. Full-house backfields were a staple of Pinyan’s teams.

Senior Hunter Courtney is the most experienced running back. He’s a fine athlete — that’s obvious every track and field season — and averaged 6.6 yards per carry last season. His 696 rushing yards ranked fifth in the county. Evan Johnston rushed for 204 yards.

Junior Alex London is expected to be the new quarterback. He’s been good on the jayvees for two years.

London should have capable targets. Carson has a group of rangy receivers, lots of 6-2 and 6-3 guys such as AJ Jackson, Michael Altman and Jake Harris. Jackson was Carson’s top receiver in 2018 with 18 catches for 319 yards and four touchdowns.

A key to the offense is going to be slot receiver CP Pyle, who had 391 rushing yards last season as a back. Pyle has breakaway speed if the Cougars can get him the ball in space. Zeb Burns, the baseball shortstop, will also be a factor in the slot.

“He went to Governor’s School this summer, so he missed stuff, but it’s not hard to tell he still worked out every day,” Crosby said.

Other linemen being counted on by the Cougars include  Zachary Deal, Gabe Frick (6-1, 320), Ben Klein, Jeremy Maldonado and Ethan Wilhelm.

Carson allowed 32 points per game last season (fifth in the county) and allowed the most yards in the county.

There’s a chance for improvement. Stirewalt, Garland and Floyd could all help the defense.

“That will depend on the game plan for that week’s opponent,” Crosby said.

A lot of Cougars will be counted on for  some two-way duty. If you’re a starting offensive linemen at Carson, you’re probably a defensive line backup.

There are four core players on the defense with considerable experience in cornerback Mikhail Gomez, linebackers Jake Nichols and Logan Rogers and lineman Chase Drinkard.

Receivers Burns and Altman will also play cornerback. Pyle will play some safety. Kadrian Smith and Caden Hudson have looked good in the secondary.

Carson’s special teams should be good. Crosby has been impressed by kicker Andrew Beaver and punter Ben Blumenthal.

“They’re both specialists who have gone to camps,” Crosby said.  “Beaver is a weapon. He’s been good on field goals from 40 yards and in and he’s putting kickoffs in the end zone 70 percent of the time. We work on those special teams a lot, so that could be a big strength for us.”

And the other strengths?

“I feel good about our ability to run the football,” Crosby said. “And we’ve had good competition at a lot of spots. That’s how you develop depth.”

Crosby, who gained a lot of experience as an assistant coach in Cabarrus County at Central Cabarrus and Cox Mill, is aware that Carson is picked last or next-to-last in the NPC by just about everyone, but he’s not losing sleep over preseason polls.

“We talk about it every day,” he said. “We’re going to try to win one play at a time and be the best team that we can be. Our goals are the same goals just about every team has. We want to make the playoffs and we want to win our conference.”

Jake Nichols — 5-9, 180, Sr. LB — One of just three starters back on a defensive hit hard by graduation, he’ll also do the long-snapping.

Ben Blumenthal — 5-10, 170, Jr. P — Blumenthal and kicker Andrew Beaver are expected to give Carson a special-teams advantage in most games.