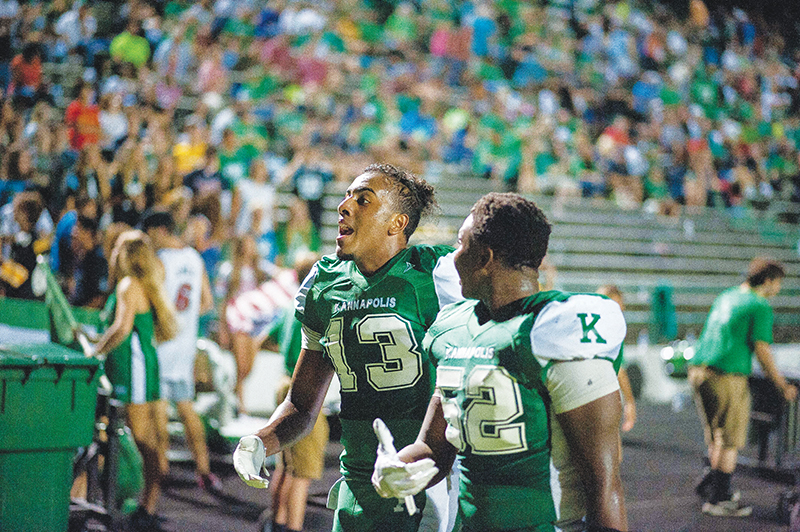 KANNAPOLIS — A.L. Brown’s football program comes off a 6-6 season. That’s disappointing in a lot of places. In Kannapolis, where there hasn’t been a losing season since 1977, it’s a disaster.

“They hadn’t lost a home game in a long time, and it looks like we’ve got them,” A.L. Brown head coach Mike Newsome said. “Then we miss a crucial tackle on a fourth-down play, and we wind up losing. We were so  close, but it was that kind of year. A season of near misses.”

“That was such a hard-fought game, and then our guys felt like we had it taken away from us,” Newsome said. “They took that loss hard. It took some time to get them back up.”

A missed PAT was a game-changer in the crushing 33-30 overtime loss to Central Cabarrus that began South Piedmont Conference play. A fourth-quarter fumble against Cox Mill proved devastating.Central Cabarrus and Cox Mill are programs A.L. Brown always beats, only this time the Wonders didn’t.

“It didn’t bounce our way,” Newsome said. “We lost our confidence.”

After a staggering 58-27 defeat against surging Northwest Cabarrus, the Wonders were 0-3 in the league. They pulled themselves together enough to beat Robinson and Concord, avoided falling apart and maintained that amazing streak of non-losing seasons.

The good news is there’s an awful lot back on the defensive side of the ball and major reinforcements have been added to the offense.

“It may take a while for our offense to click with all the new faces, but we do have talent,” Newsome said. “Hopefully, our defense can carry us until the offense settles in.”

Junior Isaiah Black is expected to enter the season as the first-string quarterback. His lone varsity start last season when Medley was banged-up was excellent — 250 passing yards and three TDs — although that was against a 3-8 Carson club.

Pushing Black is the much larger Cam Kromah (6-3, 185), a sophomore transfer from Vance.

“Cam is really talented and has a chance to be something special, but you don’t learn our offense over night,” Newsome said. “Isaiah has a lot more time running our system.”

The quarterbacks are going to have a super target in 6-3 wideout Jose Vargas, who should be one of the best receivers around. Vargas had 47 catches, nine for touchdowns last year and piled up 745 receiving yards.  Tight end/H-back Austin Grunden has made some big strides and can catch the ball down field as well as block.  Newsome said he can be one of the best tight ends A.L. Brown had ever had.

“We’ve really got one full-time starter back on offense (Vargas), but we’ve got six guys back who started at some point,” Newsome said.

Jakhiry Bennett, a senior who had some success at Northwest Cabarrus last season — has returned to A.L. Brown and will be a factor at running back or slot receiver. Todd Kennedy (formerly Tyreik Harris) will get carries, as will Jamison Flowe, who ran wild for the  jayvees in 2018, scoring six touchdowns against Mooresville.

Newsome also has two freshmen backs who looked “as good as anyone” in a recent scrimmage.

“Purvis is our biggest guy,” Newsome said. “There are some things he can get better at, but with his size, he’s very effective as a down blocker and drive blocker in the run game.”

“Eight full-time starters are back, but we can actually put 11 out there who started at some point,” Newsome said.

B.J. Foster, a hard-hitting linebacker who made 86 tackles, is expected to be the motor for the defense. Kennedy, Dezmond Adams and Sam Calleja are veteran linebackers, and sophomore Torren Wright (6-3, 210) has plenty of potential.

A.L. Brown has a pair of seniors who will be three-year starters in the secondary in Josiah Cauthen and Jaren Lipscomb. Jacob Booker and Amareon Plummer are experienced juniors.

The defensive line, led by studs Terry Williams, Mason, Jordan and Malik Morrison should be tough to move.

DB Marcus Chapman and young linebackers Omarion Moody and Jaden Johnson will be factors. The Wonders allowed 25 points per game last season, but that number should come down drastically.

Kicker Mario Carmona will be helpful. The Wonders are three-deep at that position.

“We added a lot of guys who bleed the green and white,” Newsome said.

After last season’s break-even mark, the Wonders don’t have a presence in the preseason polls, but they’ll have chance to make their statement on the field. They start a 10-game schedule at home against Ashbrook on Aug. 30, a week later than most teams. That should allow sufficient time for their new field to be ready.

“We’re working to build the confidence back,” Newsome said. “We’re excited. We play in one of the toughest 3A leagues in the state, but we can have a great season.”

B.J. Foster, Sr. LB,  6-0, 225 — Expected to be the leading tackler for a potentially awesome defensive unit that has a lot of people back. He made 86 tackles, nine for loss, as a junior.

Josiah Cauthen, Sr. DB,   5-10, 185 — Three-year starter will be a leader for what figures to be the Wonders’ strongest position group.

Isaiah Black, Jr. QB, 5-9, 150 — Only started one game last year as a reserve, but he was outstanding against Carson.