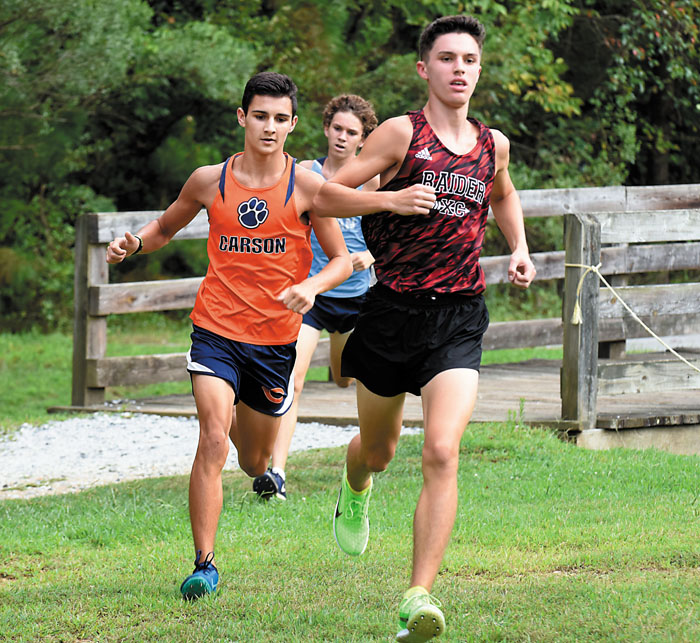 SALISBURY —It was just the Pre-Rowan County Cross Country Meet on Tuesday — a pop quiz, not the final exam.

But defending champion South Rowan looked to be in mid-season form at Dan Nicholas Park. The Raiders are ready, willing and able to defend their county championship.

“We’ll have a very good season — if we can stay healthy,”  South Rowan coach Scott Julian said. “We’ve got a lot of good upperclassmen and only lost one of our top runners (Ari Moya). This team is very motivated and hungry.”

Coach Julian’s son, Noah, is now a junior. He’s the defending individual county champ and remains ahead of the competition. He won in 17:10. Carson senior Zac Barbee was runner-up in 18:17.

“Noah is as dialed in right now as I’ve ever seen him,” his father/coach said. “I don’t have to tell him it’s time to go run. He knows what to do, and he loves to compete.”

Julian and Barbee came out flying.

“We went out so fast — I really wasn’t planning to run such a fast pace that first mile,” Julian said. “Maybe I was a little nervous. First race, a lot of new runners, you really don’t know what to expect. Fortunately, it wasn’t a super-hot day, and everything worked out OK. We’ve had some terribly hot training days.”

Barbee managed to stay on Julian’s heels for about two-thirds of the race.

“After that fast first mile, it was just Noah and me,” Barbee said. “I stayed with him for two miles, but I couldn’t catch him, and then I just kept falling back. Noah is a really good runner, and it just wasn’t the best day for me.”

West’s Luke Harrison was a surprising third in 18:35.

“In all our workouts, he’s been our third guy,” West coach Scott Foster said. “But Damian (Ackman) was injured during the race today and Luke finished ahead of Issac Castro (who was 14th).”

“We’ve got some guys who are going to be able to run together and help push each other in meets,” Coach Julian said. “Our second runner in a given meet could be any one of several guys.”

“South is going to be tough to beat this year,” Barbee said. “But we’ve got a lot of new people. It’s going to be a challenge, but we’ll give it everything we have.”

“Our guys did very well,” Noah Julian said. “We didn’t have Tyler Sheets (17th) last year due to injuries, and he’ll really help us. We’ve got a lot competition for our fifth spot, and that’s always a great thing to have.”

South has major goals. Winning the Central Carolina Conference — a league that is very stout in cross country — is one of them,

“We’ve got this small team, and some of those CCC schools like Central Davidson and Ledford might come to the line with 30 runners,” Coach Julian said. “Last year we kind of tailed off at the end because guys got hurt. But if we can just stay healthy, we can be neck-and-neck with any of them.”

NOTES: For the first time in meet history, East Rowan’s Rick Roseman didn’t fire the starter’s gun. Salisbury’s Tim Pittman handled those duties. .. Roseman was still on hand in an advisory capacity and spent a lot of time on Monday and Tuesday setting up the course. … Scott Julian and Sallie Pittman handled the meet scoring. … There was some rain in Salisbury on Tuesday, but it wasn’t a factor in the meet.