It was Carson and Conrad's day 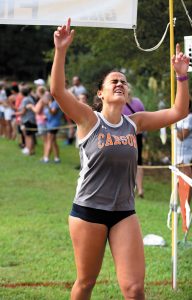 Wayne Hinshaw/for the Salisbury Post …
Carson’s Taylor Conrad crosses the finish line, winning the Pre-Rowan County meet, Tuesday afternoon at Dan Nicholas Park. Conrad, a senior, led the entire race, saying, “I wanted it bad and I went and got it.”

SALISBURY — East Rowan’s Adalie Harrison isn’t big and doesn’t make a lot of noise on the trail, but she was close enough that race leader Taylor Conrad could hear her footsteps.

“Forty feet, 30 feet, 20 feet — Adalie kept getting closer and closer,” said Conrad, a Carson senior who has been an important factor in Rowan cross country her entire career. “What I was thinking was that I’d worked all summer with the goal of winning this first race. I wanted it bad and I went and got it.”

Conrad found her second wind and took command for good shortly after the pace-setters reached the 2-mile mark at Dan Nicholas Park. She clocked 21:34 to beat runner-up Harrison by more than six seconds in Tuesday’s Pre-County Meet.

Conrad led all the way, with Harrison the only one seriously able to push her.

“I did all right for the first race of the season,” said Harrison, a senior who also scraps with Conrad in basketball. “It wasn’t a bad day to run. It wasn’t as hot as it’s been, but it was humid.”

Conrad has turned in strong races at Dan Nicholas Park in the past, but she also carries some not-so pleasant memories. In the Rowan County Championships last October, Conrad lost a bout with dehydration and illness and placed fifth, collapsing at the finish line and requiring medical attention.

“I haven’t forgotten that race or how bad I felt, but I was able to not think about it today,” Conrad said. “I put it in the back of my mind.”

While the negative memories stayed in the back, a wave of Cougars, some in orange and some in gray, surged to the front. Carson’s team thoroughly dominated the meet, with six of the top eight  runners and 12 of the best 17. Carson’s second five would easily have won the meet. Carson has a lot of seniors, a lot of freshmen and a host of people.

“We’ve got a lot of new girls, including some new seniors who are competing (Victoria Post placed fourth, while Montana Brown was seventh),” Carson coach Les-lee Ihme said. “We’ve got 12 seniors running this year. We’ve got a huge group of runners.”

Junior Megyn Spicer, who finished fifth, led West Rowan to a runner-up finish, but the Falcons were a distant second. Carson’s score was 21. West (75), East (81), South (97) and Salisbury (98) followed. North had participants, but not the necessary five to post a team score.

South, the defending champ, is in the process of trying to get several girls healthy, including Bethany Rymer, the county’s runner of the year last fall. Madison McGuire led South on Tuesday with a ninth-place finish. Leah Cressler, who placed 12th, led Salisbury. Ashley Lore (28th) was North’s best.

“We’ve got quite a few girls that we hope are on the mend from injuries,” South coach Rebekah Julian said.”

McGuire had a bad fall recently, but toughed it out on Tuesday.

This was just the Pre-County meet, a measuring stick to let the programs know where they stand, but amazing things will have to happen for this not to be a banner year for Carson.

“We’ve got strength in numbers, great depth,” Conrad said. “Everything went so well today. We’ve had some miserably hot practices, but we got a break with the temperatures today. Everything about today was a blessing.”

Ihme agreed with that. She’s optimistic about this team and about Conrad.

“She’s been a top runner in the county for a long time,” Ihme said. “She’s always put so much pressure on herself to do well, but I’m hoping this is the year everything goes her way.”

Legion baseball: Summer of 1969 was one for the ages