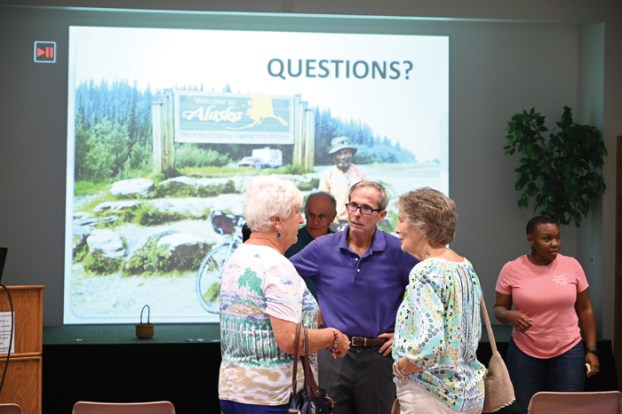 Salisbury Post contributor and cyclist David Freeze talks with attendees of his talk at the Rowan Public Library on Tuesday. Freeze recently completed a bicycling trip from Nevada to Alaska. Josh Bergeron/Salisbury Post

Freeze says Nevada-to-Alaska trip was most difficult yet

SALISBURY — Back from a 39-day cycling trek from Nevada to Alaska, David Freeze on Tuesday told a crowd of folks at Rowan Public Library about what was his most difficult trip yet.

Freeze, a Salisbury Post contributor who’s made a habit of completing long-distance bicycling trips, recently hit state No. 49 on the list of places he has cycled. At a welcome-back reception Tuesday, he said this trip, about which reports were published regularly in the Salisbury Post, was the most difficult because of the scarcity of resources and the hilly terrain. The total distance of the trip was 3,174 miles.

Freeze told a story of being low on water, having “sandpaper mouth” and praying to find something to quench his thirst. And his prayers were answered, as he found a natural spring that was still running at a rest area that had been closed and abandoned.

He spent more than half of his cycling trip camping near the roadside instead of in a hotel. That was partially a result of the expansive, open and rural spaces he cycled through during his trip and that his travels often didn’t put him near a hotel at the time he needed one.

From customs officers to fellow travelers, Freeze said the highlight of trip was the people he met along the way. But the scenery wasn’t so bad either, featuring breathtaking mountain views, glaciers and expansive lakes.

Next up, Freeze is working to complete his book about the experience, which he expects to have ready in late October or early November. He also plans to continue speaking about his journey to groups in Salisbury and Rowan County.

But he’s not done cycling yet. Freeze says he has one more trip to make to check off state No. 50 — Hawaii. He told the library crowd Tuesday that his Hawaii trip would be in March.

Freeze said a long-distance cyclist once told him that he’d be addicted after completing the first week of his first trip.

“I made it through the first week and I’ve been hooked ever since,” Freeze said.

SALISBURY – If you consider yourself to be artsy, you’ll have the opportunity to hone your creative skills during Rowan... read more