HS Football: East Rowan ready to pick up where it left off last season 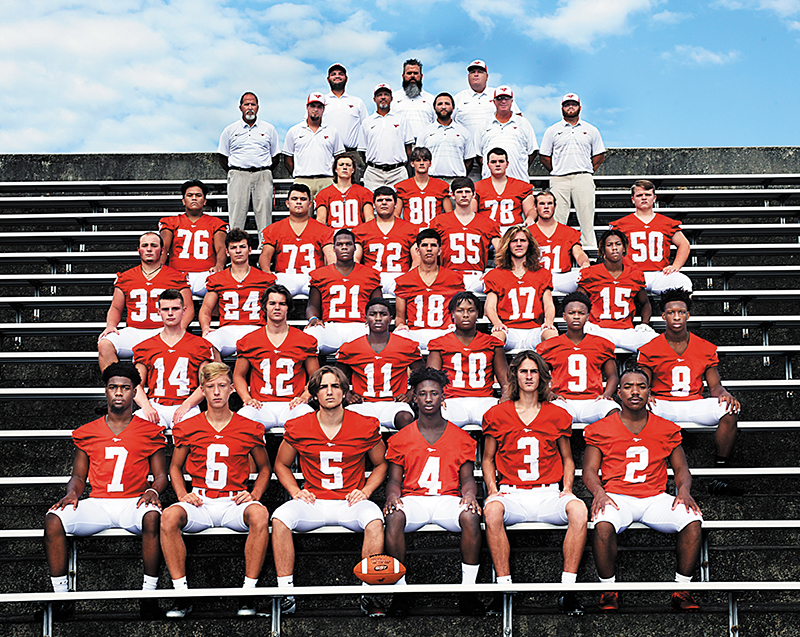 GRANITE QUARRY – Every football season begins with a lot of positive anticipation. The East Rowan Mustangs have earned the right to begin the 2019 campaign with some legitimate optimism. Realistically, not state championship optimism, but there are many reasons to believe the Mustangs can pick up where it left off last season and continue a positive trend.

East essentially returns its entire offensive line, its stellar workhorse running back, Sammy Pinckney, its solid veteran quarterback, Logan Forbis, and a couple of key members of the defense.

So why not be optimistic?

“We will see for sure (when the season starts), but I am optimistic about our chances for having a good year,” says third-year head coach John Fitz.

Last year, not many observers gave the Mustangs a second thought as the season opened. But East stunned a strong North Stanly squad on opening night, and then reeled off three wins to start the campaign.

There were ups and downs, but on the final night of the regular season, the Mustangs faced Statesville at home with a chance to claim first place in the tough North Piedmont Conference.

The opportunity imploded with five turnovers and a lopsided loss to the Greyhounds, but the Mustangs had still earned a state 3A playoff spot for the first time in five years.

An unlucky draw placed East against Statesville again in the first round. Playing on a muddy field, the inspired Mustangs led until the middle of the fourth quarter, then lost, 7-6, when a last second field goal missed.

So now, flash forward to the new season, which will begin this Friday, at North Stanly. East will stick with its highly productive pro-style I offense, which produced almost 300 yards per game in 2018.

The centerpiece of the attack is junior running back Pinckney (5-6, 170), who exploded out of obscurity last season with 1,274 yards and six rushing scores. He averaged 5.3 per carry and 127 yards per game, often rushing close to 30 times per game.

Fitz says his All-County runner might even get 50 carries a couple of times this season. “Sammy loves that and he is made for that,” Fitz said. The coach even hinted that he may involve Pinckney in the passing game this year, to see what he can do in open space.

Obviously, Pinckney will be a marked man by opposing defenses this year, but that won’t affect his effort. “That won’t change the way I approach the game and the way the team approaches the game,” Pinckney said. “We all approach every game as strong as we can and play the best we can.”

A major reason for the optimism on offense is the return of of almost all of the offensive line (only center Hunter Eagle graduated). Back are tackle Dylan Goodnight (290), guard Dylan Courtney (210) and guard Jacob Daubenmire (220), all seniors. But according to Fitz, the most impressive lineman so far is junior Josh Samoa, a 6-4, 280-pound junior.

“Our offensive line has improved so much from last season,” Samoa says. “We just want to block for Sammy and protect our quarterback.”

The returning quarterback is senior Logan Forbis (5-10, 170), who despite the run-first offensive attack, still managed 995 yards and 11 TD passes. Forbis knows his role in the offense and is fine with that. “We have a few more passing plays this year, but we are primarily a running team,” Forbis says. “But as long as we are scoring touchdowns, that is okay with me.”

When Forbis does put the ball in the air, his primary targets will be senior Cooper Wright, who missed most of last season with a broken collar bone, and junior Isaac Hinceman (6-3, 150), the brother of last year’s all-county receiver, Gabe Hinceman.

On the defensive side, a gaping void to fill is the graduation of three-time all-county linebacker Christian Bennett, last season’s defensive player of the year in the county and now a freshman player at Catawba College.

“At this point, we are right where we were at the end of last season,” Fitz said. “Obviously, we might be a little off because of Christian, but I like our defense right now.”

The defensive spotlight will be on senior inside linebacker Isa’ah Cauthen (5-9,180), who, like Bennett, is always around the ball on every play.

“I am more like an improved Christian Bennett,” Cauthen says, with a wink and a smile. “But overall, our defense is really fast this year and I like how everybody gets to the ball … a lot of hats on the ball.” Cauthen will also fill the Bennett role as a strong running back in the red zone.

Fitz says he is rotating a lot of his big guys on the defensive front, while the ends will be sophomore Dominic Dale (6-1, 222) and junior Jacob Poston (6-3, 185). In the defensive backfield, experienced junior Tahj Young returns at corner with Hinceman at strong safety and a newcomer transfer from Charlotte Independence, Khamari McCall, at cornerback. Fitz says McCall is one of the fastest players on the team.

Fitz notes that the NPC will be as strong as ever with Statesville, South Iredell and West Rowan as the teams to beat, but he feels his team will be competitive in every game. He says the Mustangs like to keep it simple with just four or five running plays and four or five passing plays. “We plan to do what we do best,” he says. “It is all about execution.”

Mustangs at A Glance

Lost in first round of 3A playoffs to Statesville, 7-6

Sammy Pinckney, Junior RB (5-6, 170). Pinckney broke through his sophomore season as the second best runner in the county with 1274 yards, 6 TD’s, 5.3 yards per carry and a average of 20 carries per game. First team All-County.

Isa’ah Cauthen Senior ILB and RB (5-9,180), One of the Mustangs top tacklers last year and is counted on to fill some of the void left by graduated star Christian Bennett. He will also be counted on as a power runner inside the red zone for the offense.

Josh Samoa, Junior OT, (6-4, 280) after slimming down from 330 pounds his freshman year, Samoa is a rock solid and greatly improved blocker for the East Pro-Style running attack.

Cooper Wright, Senior WR, FS (6-1,150), Wright lost most of his junior year with a broken collar bone in game three. The talented track runner figures to be a top receiver target as well as a quick free safety.