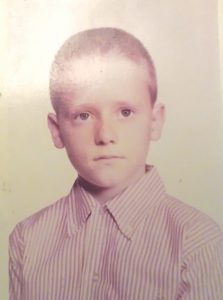 The recent spate of back-to-school ads and activities and the appearance of school supplies in our local stores have taken me back to my own primary school days—and especially the cafeteria—at Sherwood Elementary in Memphis in the early 60s.

Sorry, but I am part of the minority that always enjoyed school food. I was mightily impressed with the large containers of USDA peanut butter and cheese stacked on the shelves in the kitchen, and I was very pleased with the industrial brown gravy they took from #2 cans for our meatloaf and mashed potatoes. Nowhere since have I found the bologna cup: a masterpiece of bologna baked until it curled up and then filled with a scoop of mashed potatoes and topped with melted cheese. This was a delicacy that I feel should still grace most menus.

The green Jello was sometimes a little tougher than I hoped, but if you ate it slowly it would melt enough for swallowing. One favorite activity was using a straw to cut little circles out of our boiled carrots, which gradually filled the straw enough to provide the amusing spectacle of squeezing them out slowly…The greatest challenge was trying to penetrate the truly cryogenic ice cream cups with the dull little wooden spoons provided before the bell rang.

Mr. Hamm was the unfortunately named janitor of the school, and nearly every day he was called upon to come into the cafeteria to mop up a mess made by a nauseated student. First he threw an interesting dark green material that smelled a lot like chlorophyll on the spot. The victim was generally treated with considerable hooting and derision, but not for too long. One day it was apparently my turn: I chugged down half a carton of milk, only to discover that it was sour, and my reaction was automatic and instantaneous. Sorry, Mr. Hamm!

My fourth grade teacher was getting along in years and brooked very little nonsense. When Beatlemania swept America, she was singularly unimpressed, and while we could hear other classes listening to and lip-synching “I Want to Hold Your Hand” during recess on rainy days, our class sat sadly with our heads down on our desks. I even had a Beatle wig that my granddaddy had been given at Tigrett Industries in Jackson (where they were manufactured) because he was their Railway Express Agency driver back before UPS was imagined, but it never made it to school.

In the fifth grade I got to serve on the Safety Patrol, which held up flags so students could cross the streets at the corners of the block. In sixth grade, I had the privilege of becoming a Sound Boy, capable of setting up microphones and projectors for assemblies. My Beatles sorrow, as you can see, was almost completely forgotten.

It would be nice to turn back the clock to Beatlemania and bologna cups, wouldn’t it? I wish all the Rowan County school children a safe and happy year!

If there is a shady location in your landscape that needs some perking up, you may want to consider hardy... read more