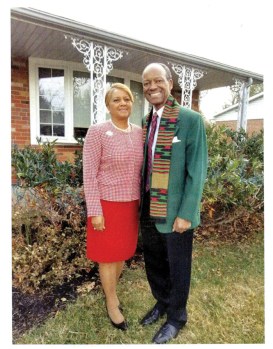 Submitted photo Dr. Dolan Hubbard and his wife, Ruth, at their home in Timonium, Maryland. 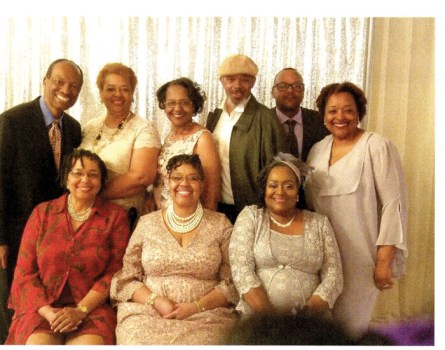 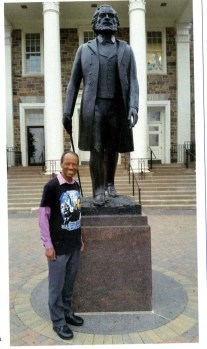 Submitted photo Dr. Dolan Hubbard stands before the statue of Frederick Douglass, located in front of Holmes Hall on the campus of Morgan State University in Baltimore. Hubbard recently retired from Morgan State after 21 years as the chairman of its English & Language Arts Department. 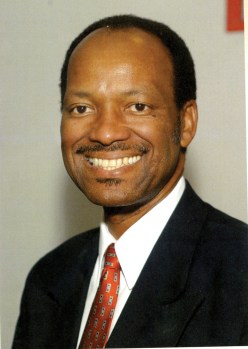 Submitted photo Dr. Dolan Hubbard recently retired from Morgan State University, where he was an English professor and chairman of the English & Language Arts Department.

SALISBURY — The enormity of the May 9 luncheon at Morgan State University caught Dr. Dolan Hubbard by surprise.

It was a big deal, with a lavish meal, musical selections, tributes from colleagues and presentations from the school and his department.

Each place setting held a full-color, 32-page book on Hubbard’s career and written congratulations from people who valued their friendships and his mentorship.

After 21 years as professor and chairman of the Department of English & Language Arts at Morgan State in Baltimore, Hubbard was retiring.

The official retirement day, June 30, also brought to a close his 40-plus-year career of teaching at the university level — not including his three years as a high school instructor.

It was a long, inspirational journey for the 70-year-old Hubbard, whose own formal education took root in the “colored schools” of Cooleemee and Granite Quarry.

He became one of the first black students to integrate East Rowan High School in the 1960s, then among only 11 African-Americans in his 1967 freshman class at Catawba College. He was the only non-athlete, he says, out of the 10 men and one woman.

While Hubbard looks back on his youth as filled with inspirational teachers, voracious reading, Boy Scouts, FFA, baseball games and the social doings around Antioch Baptist Church, it also had to be challenging for a family in which he was the oldest of nine children.

His parents, Olin and Elizabeth Hubbard, did everything they could within a caring community, and today Hubbard describes his coming-of-age years this way: “Love lifted me up.”

“I am and Granite Quarry is very proud of Dolan and his accomplishments,” says Paul Fisher, chairman emeritus of F&M Bank, based in Granite Quarry. “Being from a large family, they struggled to get Dolan his education. I sat with his mom many days as we all pushed to get him through his educational path.

“To say we’re are all proud of him is an understatement.”

Hubbard received Catawba College’s Distinguished Alumnus Award in 2012, and he has been a member of the college’s board of trustees since 1994, serving with Fisher as a trustee.

“On any number of issues,” Catawba College President Brien Lewis said in a congratulatory letter at Hubbard’s retirement, “Dolan always comes to the table with ideas, thoughtful insights and a good sense of humor. … There is no doubt that many students and colleagues have been shaped significantly by his counsel and mentoring.”

With a couple of detours along the way — including a year exploring a business opportunity in Salisbury and a stint in the Catawba College admissions department helping to recruit minority students — Hubbard had teaching stops at two Maryland high schools, Winston-Salem State University, the University of Cincinnati, the University of Tennessee and the University of Georgia.

In 1998, he joined the Morgan State University faculty as a tenured professor and chair of the department, the school’s biggest academic unit.

Hubbard’s accomplishments with the English Department at Morgan State were many, including his establishment of a bachelor’s degree in screenwriting and animation and a doctoral program in English.

Morgan State President David Wilson told Hubbard at his retirement he was “a model of excellence and a beacon for your faculty and students,” adding Hubbard would go down in the university’s history as one of its significant academic leaders of the 20th and 21st centuries.

“You are one of the world’s leading scholars on W.E.B. DuBois’ cultural production, as evidenced by your extensive scholarship on this beacon of African-American activism and intellectual life,” said M’bare N’gom, dean of the school’s James H. Gilliam Jr. College of Liberal Arts.

Hubbard became a significant contributor to the national and international conversations on African and African-American literature, according to Dr. Burney J. Hollis, a retired English professor and dean emeritus of the Gilliam College of Liberal Arts.

Hubbard’s first published piece of literary scholarship came in 1985 with “An Interview with Richard K. Barksdale,” printed in the Black American Literature Forum.

In 1994, he published “The Sermon and the African-American Literary Imagination,” followed by his commemorative “The Souls of Black Folk: One Hundred Years Later” in 2007.

His study of Dubois has made him one of the country’s authorities on the author, sociologist and activist.

In addition, Hubbard has edited other collections of essays, published 10 book chapters, contributed 19 referred articles, made additions to 10 reference books, published 13 book reviews and wrote “a number of corporate reports, opinion pieces, bibliographies, interviews and online pieces, according to Burney.

Hubbard also has participated as a presenter, moderator, chairman and responder at 137 learned conferences and societies — ” a remarkable 99 of them during his busy and demanding 21-year tenure as chair at Morgan, an average of nearly five presentations a year,” Burney said.

Hubbard’s scholarship won him a National Endowment for the Humanities (NEH) Fellowship in 1985-86, an NEH Summer Stipend in 1991 and a Sheila Biddle Ford Foundation Fellowship to the W.E.B. Dubois Institute for African and African-American Research at Harvard University in 2012.

Married in 1944 after Olin’s honorable discharge from the U.S. Army in 1943, the couple lived in Charlotte, Union County and Stanly County before moving to a black community in Davie County near Boxwood Baptist Church.

Olin was commuting to the the VA hospital in Salisbury by then, working as a second cook.

“In the days of segregation,” Hubbard says, “a second cook was sometimes used as a glorified name for a dishwasher and kitchen handyman.”

Olin quit the VA for lack of being promoted and would go on to work for the Cannon Mills plant in Rockwell and the Dolly Madison Furniture plant in Salisbury.

After attending the first grade in the black-only North Cooleemee Elementary School, Dolan Hubbard started second grade at the Granite Quarry Colored Elementary School after his family moved to Rowan County in 1958.

The school’s name later changed to Shuford Elementary, in honor of its late principal. Hubbard says Shuford School was full of great teachers, including Rosebud Aggrey and Geneva Oglesby.

Of Aggrey, Hubbard says, “Pound for pound, inch for inch, she was probably the most demanding teacher I had in my life, yet I made all A’s under her.”

After Shuford, Hubbard spent a year at Dunbar School in East Spencer, but he soon joined Calvin Strawder at East Rowan High the year after Calvin became its first black student. Strawder would later be the best man at Hubbard’s wedding.

Hubbard speaks with fondness of friends he made at East Rowan, including Donnie Moose, Jason Lesley, Donnie Yost and Dorothy Fisher. “I had a very positive time there,” he says.

High school teachers who had the biggest impact on him included Thomas Joe Lyerly and Jerry Peck. With another East Rowan teacher, Hubbard recalls, he had to be persistent in his demand to take college-preparation courses.

Even today, Hubbard says, “black students run into this.” They “leave so much blood on the floor” in their college pursuits that they often don’t seek advanced degrees.

Hubbard applied to Livingstone College, Catawba College and the University of North Carolina at Chapel Hill, and he found a way to attend Catawba through a small scholarship and working in the library.

Hubbard doubts that his parents were able to pay $400 total toward his four years at the school.

Hubbard took to heart the “baptism by fire” he was subjected to by his freshman English professor at Catawba who would give your paper an “F” for any dangling modifier, run-on sentence, misspelling or incorrect punctuation.

When he received an “A” in the class by year’s end, the professor told him he would go far. For three years, Hubbard wrote for the Pioneer, the college newspaper, serving as features editor his senior year.

Hubbard lived in an upstairs corner of Hedrick Hall with the other black male students, most of whom were athletes. To earn extra money, he worked at Goodman’s Men’s Store on North Main Street.

It was Eric Goodman who taught Hubbard it’s “not how much you make, but how much you save.” Hubbard also worked two summers, first with Dr. Sterling Whitener of Catawba College, then with Mike Abernathy, both of whom served as directors of the United Church of Christ’s Blowing Rock Assembly Ground in the mountains.

After student teaching at Salisbury High, Hubbard taught a year of high school in Frederick, Maryland, before coming home to work again for the Goodmans, who wanted to start stores in Union and Anson counties.

They were interested in allowing Hubbard to buy a percentage in the new stores.

“I realized it wasn’t going to work,” Hubbard says. “I did not have the capital.”

Looking back, Hubbard says it was the only time in in professional life — circa 1972-73 — he didn’t have to grade or write a paper.

His marriage, earning his master’s and another brief time teaching high school in Maryland followed, he returned to Catawba College at President Martin Shotzberger’s encouragement and worked in the admission office.

Shotzberger knew he could not keep him long, and Hubbard soon began his university teaching sojourn at Winston-Salem State.

How did he become a member of the Catawba College Board of Trustees?

In 1994, when Hubbard was teaching at the University of Tennessee, then Catawba President Fred Corriher asked to meet with him as Corriher was passing through Knoxville on his way to a Tennessee walking horse show in Nashville.

They met at a restaurant on the Kingston Pike and after some light conversation, Corriher got to the meat of the issue: Would Hubbard be a board of trustee member?

Corriher told him the college needed some educators among its trustees, most of whom were from the business community.

Hubbard and his wife, Ruth, who attended school in Kannapolis, have now been married 46 years. They have two grown children and continue to live in Timonium, Maryland.

Hubbard’s two brothers reside in the Washington area, and his six sisters still live in North Carolina, including several in Rowan County.

Hubbard gets home on occasion for Catawba board meetings, and he sometimes combines those trips with visits to family.

Meanwhile, in these new days of retirement, Hubbard continues work on another book related to Dubois that he hopes he can deliver for publication next year.

Rosebud Aggrey would expect him to meet that deadline.