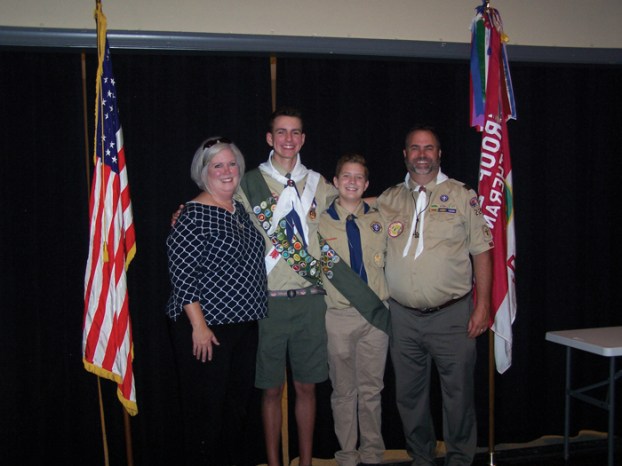 Hunter and his family

The Eagle is the highest recognition that Scouting offers to Scouts. It is earned through the receipt of more than 21 merit badges, completing the rank of and serving as a Life Scout for at least six months, demonstrating Scout spirit by living the Scout oath and Scout law and demonstrating leadership within their troop.

The scout must also plan, develop, and execute a service project and an Eagle Scout board of review. It is worth noting that a mere 4% of Scouts have earned the rank of Eagle since its inception in 1911.
Defying those odds, Hunter McAfee, son of Ed and Patra McAfee of Concord, received his Eagle Scout award on July 28 at He’s Alive Church in Kannapolis, where the family attends.

Hunter’s younger brother, Banks, is also working toward his Eagle and hopes to receive it in the next year or so. 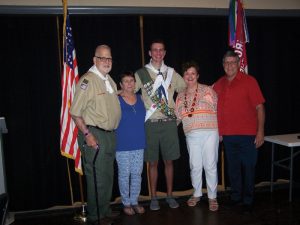 Hunter and his grandparents

Hunter has been a member of Troop No. 221 at Calvary Lutheran Church throughout his Scouting career.

Scoutmaster Kevin Perry said Hunter began his scouting career in 2006 as a Tiger Cub. After he began his Boy Scout journey, he was elected to the Order of the Arrow at only 13. Hunter earned the Mile Swim Award, the 50 Miler Award and earned a total of 45 merit badges en route to his Eagle Award.

Hunter has a long list of what Scouting taught him. Besides respect, values, responsibility and people skills, he feels that he learned to serve his community and give back. The Scouts held canned food drives and worked on service projects.

Hunter’s dad, Ed McAfee, had a great deal of influence on his Scouting journey. Ed was his scoutmaster through most of Hunter’s scouting career and went on many of the Scout trips with him.
Hunter said, “We talked about Scouting everyday.”

Hunter said he feels that scouting has made him a better person and that it also taught him mental toughness. He described scouting trips when nights were cold and rainy, sleep was hard to come by and hiking involved 35- to 40-pound backpacks in unbearable heat with little water to drink in Box Canyon in the Grand Canyon area. They used hiking poles to make a tarp over their heads to hunker down in the shade until the temperature cooled enough to continue. Hunter said it was very scary and the fear of getting hurt was real.

Hunter also talked about a hiking trip in Pisgah National Forest when he and a friend, Randy Rush, noticed the bushes rustling. They heard a low growl and saw a black bear. They knew better than to run, so they slowly backed away.

One camping trip at Camp Barnhardt in Concord brought back some memories. A terrible storm came through, so the scouts stayed in the bathhouse until 4 a.m. Hunter said that they performed the “Harlem Shake” — a dance craze at that time — until the storm passed.

Hunter chose to build an outdoor kitchen for his Eagle project. He felt that it would help serve meals more efficiently at He’s Alive Church, where his family attends. Dan Bassett, owner of Bulldog Masonry, mentored Hunter through the process. Hunter and some boys from his troop learned how to lay the stone that surrounds the stainless steel gas grill. Dan donated some of the materials and his time for the project. A hotdog fundraiser in the summer of 2018 was held at the church, and $4,700 of the $5,200 was raised to help complete the project.

Dad Ed McAfee said scouting builds basic skills needed for young people to be successful. It teaches leadership skills they will use all of their lives, he said.
They learn to respect God, their country and others.

At times, Ed said, the media has thrown a dark shade around scouting, but he believes the program has remained fundamental and strong for over 100 years. Among other success stories, eagle scouts have become senators, judges and important businessmen. The McAfee family attributes this to scouting.

In the McAfee Family, all of the men have been entrepreneurs and owned their own businesses.

Ed said, “Scouting is beneficial for the community. It’s an integral part of our society.”

Hunter’s granddad, Doug McAfee, was able to travel from Atlanta to attend the recent ceremony. Doug said that the Eagle Scout rank was worth one year of college when he received his award in 1955. You didn’t actually receive college credit for it, but you learned a lot.

He joined Scouting after World War II, and the Scouts in his Troop received secondhand equipment from the military. Doug said that when his dad, Alexander Hamilton McAfee, earned his Eagle award, he had to learn bird calls and that many of the badges were more difficult to earn back then.

Doug emphasized the importance of the relationship between the men and boys in scouting. It’s like a mentoring program. The young men learn life skills from theirsScout leaders — sooking, camping, hiking, personal hygiene and learning to respect government, family and authority.

Doug said, “I know my dad is smiling now.” Alexander McAfee passed in 1986.

The small percentage of Scouts who achieve the ranks of the Eagle Award may be due in part to badges becoming more difficult to achieve in the higher ranks. Scouts tend to procrastinate because of this. They begin driving and lose interest in working towards the Eagle Scout rank. Instant gratification sometimes gets in the way. And they must achieve the award before the age of 18.

Boys can join Cub Scouts at age 5 and Boy Scouts when they turn 10 or have earned the Arrow of Light Award.

Hunter was recently accepted at North Carolina State and he believes that the Eagle Scout Award on his resume helped him to achieve this.

He plans to go into business, and possibly work in real estate with his parents.

“I’m just happy to be part of the club,” Hunter said with a huge smile.

Yellow jackets are active and causing problems for those working outside or trying to enjoy the outdoors. Hot weather we’re... read more