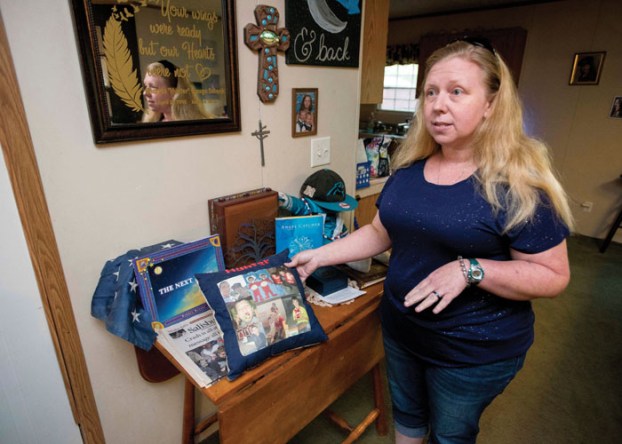 JON C. LAKEY/SALISBURY POST Jennifer Shoe maintains a small table in the living room of her home near Rockwell with items that help her remember her son, Hunter Schenk, who was a student at East Rowan High school when he died in a car accident on Goodman Lake Road in 2016. On the table is a toy stuffed animal rabbit that is dressed in one Hunter's baby clothes. A simple box contains some of Hunter's cremated remains. Shoe has not found an urn that she thinks is fitting her his ashes. Shoe also maintains that young drivers should have expanded driving programs to help develope better driving skills and prepare them for defensive driving. Schenck was driving a car on Goodman Lake Road when his car ran off the side and he over corrected and crashed. Rockwell, NC 8/7/19 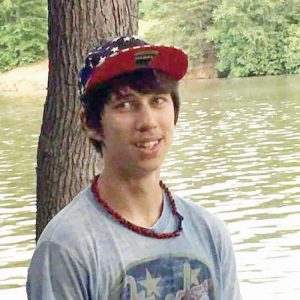 Jennifer Shoe never worried about her son, Hunter Schenk, being behind the wheel because he was always the cautious one.

But on the evening of June 18, 2016, the rising East Rowan High School senior did something uncharacteristic — he didn’t fasten his seatbelt.

Schenk, 18, was driving his Chevrolet SUV too fast in a curve just before Heavens Trail and Goodman Lake Road. He lost control, ran off the road, overcorrected and the vehicle overturned. Schenk was thrown from the vehicle while his passenger, a friend, was tossed around inside the vehicle but not ejected. He also was not wearing a seatbelt.

Shoe recently learned that Hunter and some friends had gone fishing that Saturday and there had been an argument. He was still distracted when he crashed on Goodman Lake Road.

According to the National Center for Health Statistics, motor vehicle crashes are the leading cause of death for 15-to-20-year-olds.

In 2017, there were 88 fatal crashes involving teens 15-to-19 years old in North Carolina, based on the most available data. Of those fatal crashes, 11.4% were the result of distracted drivers, 80.7% were the result of lane departures, 40.9% were killed because of speed and 15.9% were alcohol-related. In those same 88 crashes, 43% of teens were not wearing a seatbelt.

Just eight months after her son’s death, with no planned speech, Shoe stood before a room full of her son’s fellow students to remind them of what could happen. Schenk was well-liked and that was one of the biggest reasons Shoe wanted to address the school.

“You just never know, it can happen to anybody,” she said.

As Shoe stood that day to address the students, they were quiet, which she hoped meant they were listening. If she reached one student, then sharing such a painful experience was all worth it.

She’s since received confirmation from a teacher that her voice was heard. In fact, sometimes students message Shoe via Facebook, just to say they are thinking about Schenk and don’t quite know how to process their feelings. Some students have reached out to Shoe just to check on her.

“I worry more about how other drivers drive around me,” Emma said.

In addition to the instruction Emma will receive at her high school, her parents have plans to enroll her into the Concord-based advanced driver training program B.R.A.K.E.S. (Be Responsible and Keep Everyone Safe). The charity organization provides free hands-on experience through its teen proactive driving class. There is a registration cost to reserve a spot. The money is returned to the participant unless they choose to donate it to the program, Shoe said.

Shoe said she hopes that her son’s memory will continue for years to come.

“He was a good kid, a sweet kid. He loved the honors chorus and the ROTC. He loved to hunt and fish and he loved his family,” Shoe said.

Hunter had an infectious smile. He was easy to like and was a practical joker.

“I miss his smile. He would always cheer us up,” Emma said of her brother.

Hunter loved to wear hats and loved Skittles. Candy is what he always requested for Christmas.

It gives Shoe some comfort to know that her son made the decision to become an organ donor. Though, many of his organs were not able to be used, except bones and skin.

It was Hunter’s intent upon graduation to follow in his older brother’s footsteps and join the military. As a tribute, Powles Staton Funeral Home retired a military flag for Hunter.

A retired N.C. Highway Patrol trooper, Tommie Cato has needed to tell mothers who arrive at the scene of an accident that their child did not make it. He’s also gone to homes to inform families that their loved ones died in a crash.

In his years with the Highway Patrol, Cato has had to call upon neighbors and church members to accompany him to somehow provide comfort where he could not.

“It’s very nerve-racking. You just about want to cry. You know when they see you in uniform or there’s two troopers and then they see their pastor there, they usually immediately start crying,” Cato said.

Cato uses his experience as a retired trooper and, now, position as a school resource officer to educate student drivers about the ramifications of texting, speeding and other distractions that could lead to a fatal crash. He invited Shoe to speak at the school assembly about Hunter.

“The worst thing is when a mom arrives on the scene. I’ve seen moms pass out. You feel for them so bad. A mom’s screams just pierce your heart,” he said.

Mabry died following a single-vehicle crash in which officials said speed and inattention were factors.

When discussing the potential dangers of driving, Cato said he reminds students of the classmates whose lives were prematurely taken in crashes.

The death of a student impacts not just the family, but the school and the community, he said.

“It gets me too because I feel like seat belts play a big role. I see some of the students not buckled. They don’t realize how devastating this will affect their families and really our whole community,” Cato said.

Cellphone usage while driving, specifically texting, remains a major issue for teens while driving, Cato said. He said there needs to be another push for the Hands-Free Act. Had it passed in the N.C. General Assembly, it would have banned the use of handheld cellphones while driving.

He said the texting-while-driving law that is already in effect is one he feels is hard to enforce.

Problems with distracted drivers is particularly acute among teen boys. In 2016, the motor vehicle death rate for male drivers ages 16 to 19 was two times that of their female counterparts, according to the Insurance Institute for Highway Safety.

“You don’t want anyone to lose their lives,” said Trooper Ned Moultrie.

Moultrie spends many days in schools educating students about factors that could contribute to a traffic crash — distractions, speed, impairment and not wearing a seatbelt.

The first point Moultrie emphasizes is to limit the three types of distractions — visual, mechanical/physical and mental/cognitive.

At times, Moultrie said, he’s investigated traffic crashes and, when asking the driver what happened, the only response is that they were thinking about something else.

Moultrie said students wonder why so much emphasis is placed on texting and driving. And his response is simply that it’s an instance that involves all three types of distractions — visual, physical and cognitive.

“Texting is like going down the road with your eyes closed,” he said.

Moultrie said people often attribute a crash to a driver overcorrecting, but he said the problem usually lies first in a distraction that caused them to run off the road and overcorrect the steering wheel.

“Let’s focus on not having that problem in the first place,” he said of distractions. “Our goal is to reduce the number of collisions and make North Carolina roads as safe as possible.”