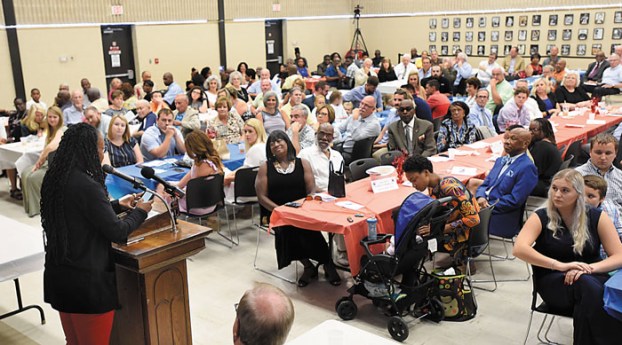 Wayne Hinshaw file photo/for the Salisbury Post ... Salisbury-Rowan Hall of Fame inductee Shayla Fields, left, speaks during last Sunday’s ceremony at the Civic Center. The Hall of Fame is planning to have a permanent home at West End Plaza, but it needs to raise $25,000 to make that move a reality.

Permanent home available for Hall of Fame, but donations needed

SALISBURY — For almost 20 years, the physical presence of the Salisbury-Rowan Sports Hall of Fame has existed for only a few hours on a Sunday afternoon in August.

Photos recognizing previous inductees have been placed on the walls of the Salisbury Civic Center, tables have been decorated, and photos of the newest inductees set up on a small table.

At the conclusion of the ceremony, the photos are returned to boxes to be stored in a closet until the following year, while tables are cleaned and the area is readied for the next event.

But if things go as planned in August of 2020, the Sports Hall of Fame will have a permanent location, where past and future inductees can be honored on a continuous basis year-round.

Rowan County officials have made space available in the West End Plaza that will give the Sports Hall of Fame a place to reside.

“The place is big enough for us to do what we would like, but not so large that it will overwhelm what we have planned,” said Scott Maddox, co-chairman of the Sports Hall of Fame committee.

A campaign to raise the $25,000-plus needed was officially kicked off on Sunday at the Sports Hall of Fame’s annual induction ceremony.

“We not only need to upgrade the location to accommodate a Hall of Fame, we need to procure the items to furnish the Hall,” Maddox said. “Things like plaques, showcases and electronics are essential in providing people with a first-class Hall of Fame, something the community can be proud of.”

Maddox said the Sports Hall of Fame should be educational as well as a place to honor inductees.

“There is Rowan history that for various reasons hasn’t been properly addressed and honored,” Maddox said. “Prior to integration, black athletes and coaches weren’t very well known outside their own communities, and that history not only needs to be brought to light but preserved. The same can be said for women’s athletics.  Until the last 30 years, women’s sports weren’t given their proper due. If we can go back and highlight the accomplishments and impact that these athletes and coaches had on Rowan athletics, we will help ensure that this history is not forgotten.”

Maddox envisions interactive areas in the Sports Hall of Fame where visitors can hear directly from former athletes and coaches and where teams that made a lasting impact on the community can be honored.

“The possibilities are limited only by the imagination and finances available to make them reality,” Maddox said. “There is a lot of work to be done between now and next August. Athletics have played and continue to play a significant part in Rowan’s past, present and future and we believe that a place to recognize the impact of it is needed and will be well-received.

“For the Hall of Fame to come to fruition and be a place of pride, the community is going to have to get behind it,” Maddox continued. “I have full faith that we will not only raise the goal of $25,000, but exceed it. In the next few months, members of the Hall of Fame Committee will be out in the community asking for donations. We’re excited, and we hope the community shares our excitement.”