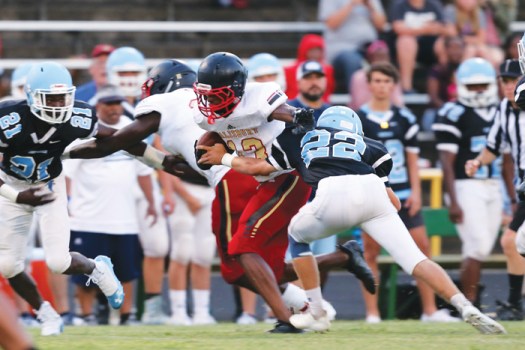 Salisbury’s Lawon Blackwell (13) forces his way up the middle against West Rowan's Daniel Sell (22) and Ty Lark (21), during the Jamboree. James Sipes for the Salisbury Post. 8/16/2019 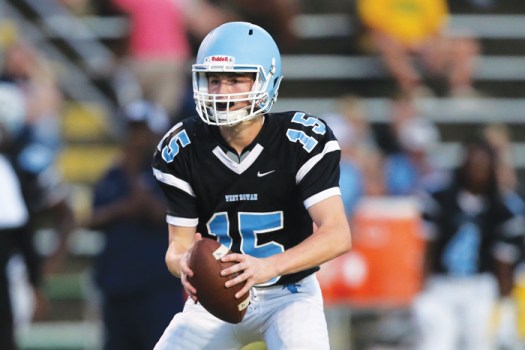 West Rowan QB Noah Loeblein (15), getting his first start in the Jamboree game against Salisbury. 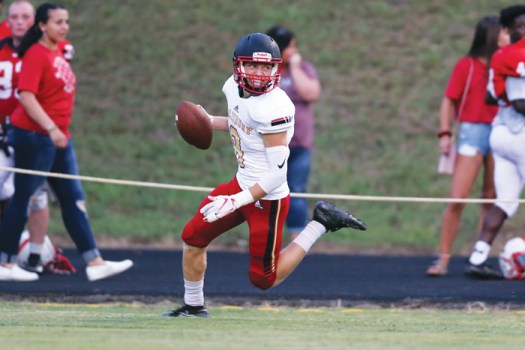 After catching a touchdown pass Salisbury’s Patrick Taylor (8) looks back for flags. They came during the celabration. James Sipes for the Salisbury Post. 8/16/2019 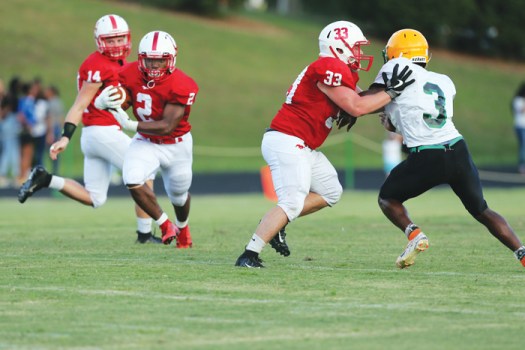 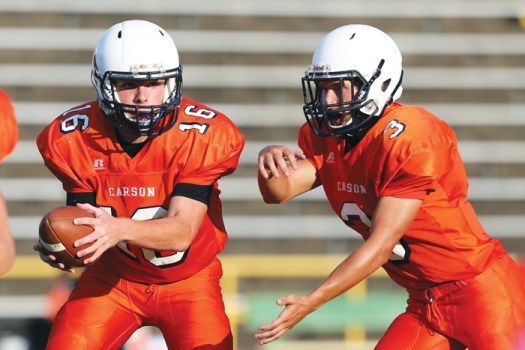 Carson’s QB Alex London hands off to #3 in the Jamboree game against West Stanley. James Sipes for the Salisbury Post. 8/16/2019

Four controlled scrimmages, featuring 20 minutes halves with a running clock, gave the teams an opportunity to get tuned up for next Friday’s regular season openers.

When the first scrimmage began at 6 p.m., the temperature was still in the humid 90s, with the sun bearing down. But as the evening went on and the temperatures went down, a large crowd of local fans filled both sides of the stands to check out their favorite teams.

“It was a good opportunity for all of these guys to play in real game conditions before a large crowd,” said host Ben Hampton, head coach at North Rowan. “So from that standpoint, it was a good thing.”

The visiting Colts scored on their first two possessions, thanks to a strong running game and some late defensive stops. It was the public debut for new Cougars coach Daniel Crosby, and he saw some good things from his team.

“Oh yeah, we really got better as the game went on, but we have just got to find out what pushes our buttons to get us going early,” Crosby said. “But we are working hard and the score doesn’t mean anything. We are just preparing for our opener against South next Friday.”

Junior quarterback Alex London directed the offense and connected on several  long passes. Runners CP Pyle and and Hunter Courtney combined with London to move the ball downfield to the West Stanly 13-yard line, late in the scrimmage. However, a fourth down pass fell incomplete. The Cougars reached the Colts’ 12 on their final possession, but again they ran out of downs in the red zone.

West Iredell burned the Mustangs for a 35-yard TD pass on a fourth down and 13, to begin the scrimmage, but it was all East Rowan after that, in a 14-7 win. As expected, Mustang runner Sammy Pinckney ran early and often, but Isa’ah Cauthen showed off his rushing ability as well, including a one-yard touchdown run. Quarterback Logan Forbis passed for the two-point conversion to put East ahead, 8-6.

Forbis sealed the deal late in the scrimmage with an 18-yard touchdown strike to receiver Cooper Wright, making it 14-7. A late interception by Braeden Moore for East ended all hopes of a West Iredell comeback. The Mustangs also got good pressure on the quarterback with sacks by Josh Samoa and Blake Hill.

Coach John Fitz was unhappy with the early TD by West Iredell, but felt his team responded well. “When it is fourth and 13, there aren’t too many things they can do but pass it,” he said. “But they got behind us and there is no excuse for that. But we will work on that and get ready for next Friday. We will be fine.”

Salisbury quarterback Vance Honeycutt hit senior receiver Patrick Taylor for a 45-yard TD pass on fourth down to open the scrimmage, but the Falcons bounced back, thanks to their running game and solid defense.

The Hornets actually threatened on their next possession, reaching the West 22-yard line,  but safety Daniel Sell pounced on a Salisbury fumble to stop the drive.

From there, the Falcons gashed the defense on big runs by Jalen Houston and Michael Gonsalves. Cayleb Brawley punched it in from the 3-yard line and West led, 7-6, after a Max Blackledge PAT.

West expanded the lead on their next possession as sophomore quarterback Noah Loeblein hit Houston for 32 yards and a first down at the 8-yard line. Brawley capped the drive with a 1-yard plunge and Blackledge’s kick made it 14-6.

After holding Salisbury on downs late in the final half, Loeblein connected with Elijah Robbins on a screen pass that turned into a 23-yard catch and run. The PAT made the final score 21-6.

“Execution is the thing for us and we had some decent chances,” said Hornets head coach Brian Hinson. “On our offensive line, we have to be better up front. Then, on defense, we got tired and didn’t play fundamental football — and it showed.”

West Rowan coach Joe Nixon found good things to say about his team, although he saw room for improvement. “We are still in the mindset that this is the final week of preseason camp,” Nixon said. “The biggest thing is for our guys to come in and compete in this big atmosphere. Biggest thing is, we are planning to play physical this year because that is who we are and who we need to be.”

The final scrimmage of the night was one of the most competitive as the host Cavaliers held off the South Rowan, 6-0. North’s star runner, Malcolm Wilson, broke a 16-yard scoring run, early in the competition, for a 6-0 lead. South would not allow them to score again.

South quarterback Drew Huffman directed his team to the North 4-yard line, just before the first period ended, but a big sack by North’s defensive front line pushed the ball back to the 14 on third down. A 30-yard field goal try by South’s Jackson Deal went wide right.

The Cavaliers had a good drive to open the second period stymied by a holding penalty and they never threatened again.

The Raiders made a final push to tie or take the lead as the clock ran down. Huffman rolled out left and hit a leaping Logan Perry in the back corner of the end zone for an apparent touchdown. But an illegal block nullified the score and ended the scrimmage.

North’s Hampton was very blunt about his team’s performance in the scrimmage. “We told our guys what we wanted to see tonight was execution and eliminate mistakes,” he said. “We failed to do both, so we have got a lot of work to do before next Friday against Salisbury. We had something like six holding penalties, so that is not executing.”

For South coach Daniel Yow, the mood was upbeat, even though his Raiders failed to dent the scoreboard. “We have got to learn how to finish up around the goal line, that’s all,” Yow said. “We moved the ball around and got into the red zone, but we need to finish. But I am proud of our guys and the hard work they put in all summer is starting to pay off.”

Now, it’s on to the regular season.