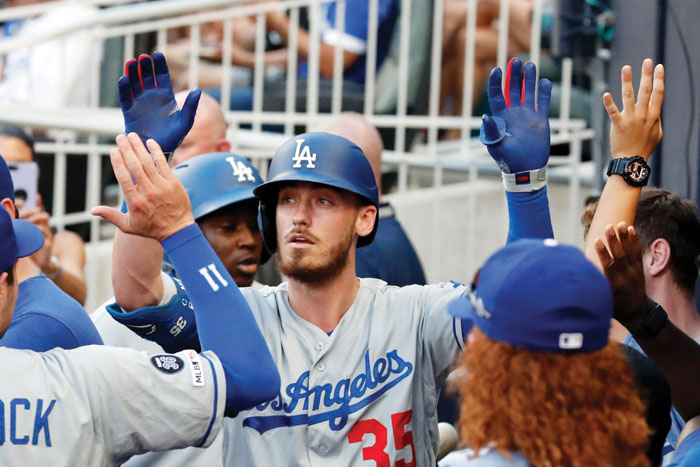 Los Angeles Dodgers right fielder Cody Bellinger (35) celebrates in the dugout after hitting a solo home run in the first inning of a baseball game against the Atlanta Braves, Friday, Aug. 16, 2019, in Atlanta. (AP Photo/John Bazemore)

By GEORGE HENRY Associated Press
ATLANTA (AP) — Cody Bellinger hit his 41st home run, Max Muncy and Justin Turner connected against reliever Sean Newcomb in the seventh inning, and the Los Angeles Dodgers beat the Atlanta Braves 8-3 Friday night in a matchup of NL division leaders.
It was nothing new for the powerful Dodgers, who set a major league record with 22 homers in a five-game span when Will Smith launched a two-run shot off Jerry Blevins in the eighth.
Los Angeles continued to dominate the Braves, too. The Dodgers improved to 18-6 against Atlanta since 2016, using Muncy’s three-run homer and Turner’s solo shot to lead 6-3 after Newcomb relieved starter Mike Soroka.
Los Angeles led 1-0 in the second when Bellinger crushed a homer to right-center, his fourth in five games to take the NL lead. He began the night tied with Angels star Mike Trout for most in the majors.
The NL East-leading Braves pounced on Kenta Maeda in the bottom half, going ahead 3-1 on Matt Joyce’s two-run double and Ronald Acuña Jr.’s hard RBI single to left-center.
Maeda avoided further trouble when Freddie Freeman lined out with the bases loaded. The right-hander struck out seven straight before Josh Donaldson singled with two outs in the fifth.
The two-time defending NL champion Dodgers, who eliminated the Braves from the postseason last year and swept them at home in May, got a run back in the third off Soroka on Joc Pederson’s RBI single.
Soroka has gone six straight starts without a win, but was in line for his 11th when Newcomb replaced him with two outs in the seventh. Soroka allowed three runs and seven hits. He escaped a bases-loaded jam in the sixth when Edwin Ríos grounded into a double play.
Muncy’s go-ahead homer sailed into the seats in right-center as the sellout crowd moaned. Turner followed with a drive to the same part of the ballpark, the 14th time the Dodgers have gone back-to-back this season.
The NL West leaders are 13-3 since July 30.
TRAINER’S ROOM
Dodgers: Manager Dave Roberts said INF Chris Tayler (broken left forearm) and utilityman Kiké Hernández (left hand sprain) could return by the middle of next week’s homestand against Toronto and the New York Yankees. Both are on rehab assignments.
Braves: CF Ender Inciarte left after hurting his right hamstring while rounding third base to score a run. Rafael Ortega took his place. … SS Dansby Swanson has missed 22 games with a bruised right foot and has no timetable yet for a rehab assignment.
UP NEXT
Dodgers: LHP Hyun-Jin Ryu (12-2) pitched seven scoreless innings last Sunday against Arizona and leads the majors with a 1.45 ERA. In four career starts against Atlanta, he is 1-1 with a 1.98 ERA.
Braves: RHP Mike Foltynewicz (4-5, 6.24 ERA) will face the Dodgers for the fourth time. He is 1-2 with a 6.23 ERA against Los Angeles.
___
More AP MLB: https://apnews.com/MLB and https://twitter.com/AP_Sports