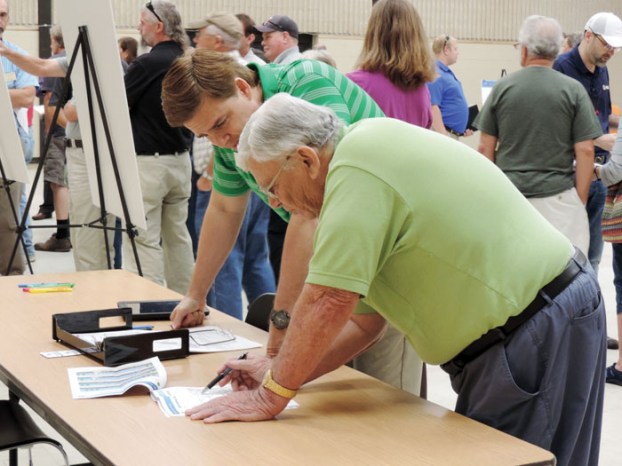 Residents examine maps for the planned Airport Parkway at a DOT hearing Tuesday evening in Salisbury in June 2018. N.C. Department of Transportation photo

SALISBURY — Construction could start in the 2027 fiscal year on a road that Rowan County Commissioners Chairman Greg Edds says will open land near the airport for economic development.

Called Airport Parkway, the two-lane road would stretch from Jake Alexander Boulevard, near Brenner Avenue, to U.S. 29, near Peeler Road. The road would measure 4 miles, “improve traffic flow, safety and improve access to southwest Salisbury and the Mid-Carolina Regional Airport,” the N.C. Department of Transportation says about the project on its website.

“It’s going to be a more direct line to the airport and may open up some available land for development,” Edds said. “In our mind, most prominently, it would be airport-related businesses.”

Airport Parkway, estimated to cost $33.4 million, is the biggest-ticket item for Rowan County in the latest draft of the State Transportation Improvement Program, released last week and scheduled for final approval in September. The plan outlines funding for transportation projects across the state, from bridge replacements and resurfacing to widening Interstate 85.

There’s still much undecided about the Airport Parkway project, including the route it would follow from Jake Alexander Boulevard to U.S. 29. And that work will be tough, said Pat Ivey, the DOT Division 9 engineer, because of neighborhoods within a study area and environmental considerations.

Ivey said the latest draft of the transportation plan pushes back construction by one year — from the 2024-25 fiscal year to 2025-26. That’s because of a lack of funding for projects across the state during those years.

The Julian Road project could have started as soon as the current fiscal year, Ivey said, but the funding shortage means the widening has been delayed two years — to the 2022 fiscal year.

The total project cost for the Julian Road widening is estimated to be $15.3 million, according to the transportation plan.

Other Rowan County work in the plan includes pavement rehabilitation on I-85 from Spencer to China Grove and bridge replacements on N.C. 801 over Fourth Creek and Hurley School Road over Norfolk Southern railroad tracks as well as sidewalk construction projects across Salisbury.

“These are just a few of many projects included in draft transportation improvement plan that will have great impact on the communities we serve,” Ivey said. “These projects will make travel safer, alleviate congestion, and create travel options drivers in this area have never had before.”

DOT’s 10-year transportation plan is updated every two years, and projects scheduled in the first six years of the plan are considered committed to and not re-evaluated, a news release said.

One notable omission from the latest plan is the widening of Mooresville Road outside Salisbury. Ivey said that project did not score high enough in priority, according to the state’s formula.

And when asked, Ivey said all lanes on I-85 as well as new exits would be open by the end of the year, with all construction complete by the spring.

Editor’s note: This article has been updated to correct incorrect information provided by the N.C. DOT. Construction is scheduled to start in fiscal year 2027.

MOUNT ULLA — The cause of a Wednesday morning fire that destroyed a home on Brown Road remains unknown, Rowan... read more