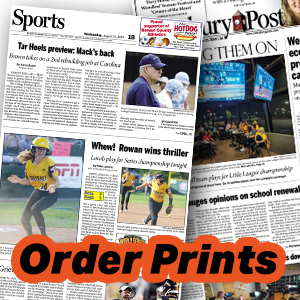 By Liz Moomey and Josh Bergeron

SALISBURY — The Little League softball champions of the world received a rousing welcome Thursday as they returned from their second championship in four years.

With lights and sirens blaring, police and firefighters escorted the Rowan Little League softball team from Charlotte Douglas International Airport to downtown Salisbury and West End Plaza, where they were greeted by large, cheering crowds.

The team briefly departed the bus at the Square in downtown, where supporters offered high fives and chants.

In the crowd was Rori Wilson, who brought with her a sign saying “We ❤ Campbell and the best bucket catcher around,” a nod to the softball team’s star pitcher Campbell Schaen and her dad.

Wilson said she texted Campbell after every game and was proud of Wednesday night’s victory, in which Rowan Little League beat Louisiana, 4-1.

Meanwhile, families and fans were waiting for the team at West End Plaza. Some held balloons and posters as kids tossed around a softball in the parking lot.

Carmen Freeze’s family said they were screaming and dancing as they watched the final game. Alison Coffey, Freeze’s aunt, said Freeze’s great-grandmother watched the game under a blanket sitting in her chair.

Crystal Heyer, her other aunt, said the win was especially big for Freeze since her mother had passed way and that Freeze was over-the-moon excited. She enjoyed seeing her on TV smiling and giggling as she played.

Heyer was ready for Freeze’s return.

“I can’t wait to squeeze her,” she said.

Shian Mills, 19, was a proud sister as she sat, waiting for the bus to pull up.

Mills said she introduced her younger sister to softball, and is proud that she has continued to play and succeed at the sport.

“I’m glad she’s the one that’s going far,” Mills said. “She worked hard for this.”

Mills said she couldn’t watch most of the games, feeling like she may be bad luck. But she couldn’t avoid watching the championship, and she watched her younger sister win the World Series.

Members of the youth group at Beth Page United Methodist Church came to cheer on Kassy Sechler. Mari Ed Vickers, the youth leader, said she planned to scream and cry as the team gets off the bus.

Vickers said Rowan’s motto was fitting: “One team, one dream.” The team, she said, was not supposed to conquer the championship, but it did.

Julie Noblitt came to celebrate Arabelle Shulenburger, her niece. Noblitt got Shulenburger started in her softball career at age 3 as the Landis recreation director.

Noblitt shared a text she sent to Shulenburger that said, “Relax when you get in batter’s box, pick good pitches, just go for a base hit, not a home run and believe in yourself because everyone else already does! Get ‘er done!”

County Commissioners Chairman Greg Edds, who was downtown, noted that the team had been to the world series four out of the previous five years in addition to winning it twice.

“It really speaks to, not just the quality of the team, but the commitment of local parents, the coaches, the Little League Softball organization and all the volunteers,” Edds said. “It really is a team and community effort, and Rowan County really is an international dynasty in the last five years.”

County Commissioner Judy Klusman said members of the softball team have developed skills that will be invaluable later in life.

Klusman said that the success of the Rowan Little League Softball team has been a boon for the reputation of the community, too.

“I’m excited for the girls and proud of them and I think some of them will be going on to play college ball, especially the pitcher,“ she said.

A parade for the team is planned for 9:30 Saturday morning, with the route being the same as in 2015 — from Richards Barbecue to Main Street and Innes Street before turning on Statesville Boulevard and heading to Salisbury Community Park.

Associated Press ELIZABETHTON, Tenn.— Dale Earnhardt Jr. will take the weekend off from broadcasting to be with his wife and... read more