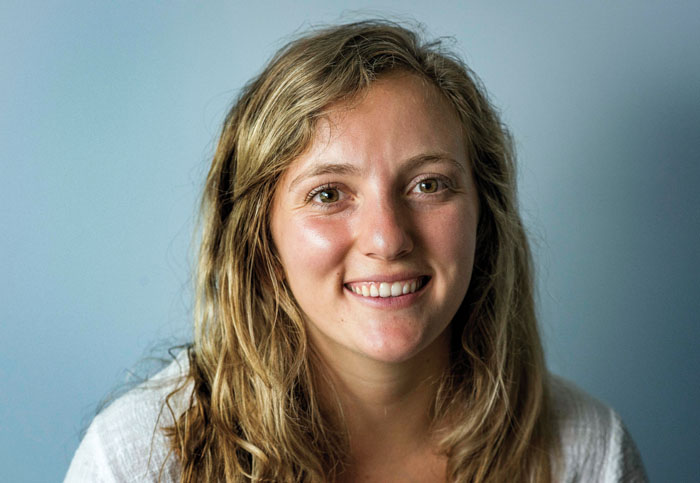 JON C. LAKEY/SALISBURY POST Emma Labovitz, who completed her undergraduate studies at Appalachian State University was traveling abroad in Nepal, when she reapplied and was awarded a Fulbright Scholar. Labovitz has plans to work on her masters degree and abtain a PhD. Salisbury, NC 8/9/19

Emma Labovitz is a smart, ambitious young woman who has much of her future planned already.

She’ll be getting a kick-start into that future with a Fulbright Scholarship that will take her to the Netherlands. There, she will work on a master’s degree in public administration with a focus on migration and diversity. She’ll have a strong policy focus with her research there.

Her interest in immigration and how refugees are treated blossomed when she read Dave Egger’s book “What Is the What” when she was in high school. The story of the fate of some of Sudan’s Lost Boys moved her to the point she spoke with her principal at Salisbury High School and invited one of the Lost Boys to a fundraiser for the cause.

She has since read most of Eggers’ other books and corresponded with him, receiving a handwritten note urging her to continue her passions.

Labovitz applied for the Fulbright when she was a senior at Appalachian State University, and she made the alternate list. She was invited to reapply and did that while working in Nepal for a nongovernment nonprofit group. She stayed in a small village, Teval, working in an Israeli-based program with six other international interns. They were paired with six Nepalese people. 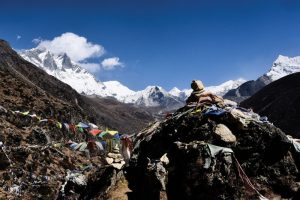 Submitted photo Prayer flags line the route of a hike to Mount Everest in Nepal. The wind slowly rips threads from the flags and a prayer is sent up. This was part of Emma Labovitz’s sojourn in Nepal before going to the Netherlands on a Fulbright Scholarship.

“The best part, besides doing the research there, was getting to see the impact of various agriculture projects had on the livelihood of the people,” she said.

Her research was based on the question, “Can people migrate and does it improve their quality of life?”

The village was mostly women and children. The men had left to find work elsewhere. She studied how that affected the women of the village. She also learned the second-largest part of Nepal’s gross domestic product is remittance — people leaving to find work and sending money back.

The next question, with mostly women left behind, was how that affected leadership. “How do we look at questions from the perspective of the community?”

From reading “What Is the What?” she saw a big problem immigrants and refugees face in the United States. There is no program to train them on what they need to know to survive and thrive.

“Refugees and immigrants are some of the most vulnerable individuals in the world. And they hope to build a better world,” she says.

“There must be more compassionate legislation for these people. No one wants to leave their country. It’s just so hard. Without help from the U.S. government to teach them how to assimilate, we rely on nonprofits, like religious organizations, to do it for us.

“This is a great loss. We don’t give people a chance to acclimate.”

The U.S. accepts fewer and fewer refugees, a fraction of what other countries accept, she says. “It’s not enough to make an impact, and they can’t just pull themselves up by their bootstraps.”

In Sweden, for example, refugees get language lessons, schooling and instruction in daily life.

“Refugee communities are too vulnerable to not give them a chance to flourish and succeed. I hate the word illegal. I hate othering. We get to the point of not seeing them as humans,” much like the Nazis did to the Jews in the Holocaust. “Once you remove someone’s humanity, it’s so easy to hurt them.”

The value of her time in Nepal is that she was forced to see her skin color. It was the first time she had felt “other,” and it was very powerful. Being white, she still had power, but it was different.

“I feel I really exchanged experiences with the people there. It’s hard as an outsider to create power and balance, but we can learn to work together to solve problems.”

Emma is Jewish. The Nepalese people are 80% Hindu, and the rest are Buddhist. They value things differently. “But we have a shared experience as humans.” She celebrated Hindu holidays and found the underlying humanness of it all and a set of core beliefs “we all share.”

When Sweden accepted tens of thousands of refugees, she read about the process in The New York Times and Wall Street Journal. Journalists went to Sweden to collect data on “how we talk about refugees,” she said. Then they asked how that had an implication on policy.

Sweden classifies migrants by ethnicity, not by country, and a sort of superdiversity has been created.

The Netherlands is very similar. Labovitz will be living with three other students in an apartment in Rotterdam. The Fulbright pays for that. Rotterdam is a city of 600,000, but it’s just 50% Dutch. The mayor is Muslim.

“It’s a good fit to look at the issues I’m interested in.”

Her rabbi, Andrew Ettin, gave her advice when she felt overwhelmed by the problems she was seeing. He told her this, and she write it down and keeps it with her: “We have to do something knowing it won’t be enough, but also knowing enough is beyond the capacity of an individual.”

“You choose what you care about,” Labovitz said, “and you work toward it.”

She believes travel is very important, especially for young people. “I realize it’s a privilege, but you should do it to see somewhere different.”

But, she adds, you can do that in Salisbury. “Go to a new church. Talk to someone who is different than you.

“When we share, our problems can disintegrate. If you engage with people who are different from you, you need to engage and understand.”

Emma’s twin sister, Mattie, is in law school. They are the daughters of Diane and Seth Labovitz, who will visit Emma at Christmas.

Beyond the Fulbright, Rotary has made it possible for her to travel to do her study of immigration policy. The Boone club is her sponsor, and the Salisbury club has also contributed to what she will need for her year in the Netherlands. She said without their help, she wouldn’t have been able to make the trip.