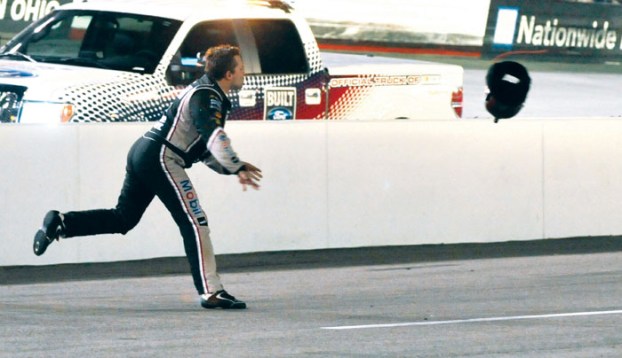 FILE - In this Aug. 25, 2012, file photo, driver Tony Stewart throws his helmet at Matt Kenseth's car after the two collided during a NASCAR Sprint Cup Series auto race at Bristol Motor Speedway in Bristol, Tenn. The track forever marketed itself as a raging tempest for drivers to lose their cool and explode in aggressive anger. Jeff Gordon once shoved Matt Kenseth, Tony Stewart threw a helmet, middle fingers are the common form of communication, and tempers are typically teetering right at the boiling point. (Earl Neikirk/Bristol Herald Courier via AP, File)

CHARLOTTE (AP) — It was 20 years ago when Dale Earnhardt Sr. spun Terry Labonte to win a Saturday night race at Bristol Motor Speedway.

Earnhardt was chasing the trophy — the playoffs didn’t exist, no stages, no bonus points — and The Intimidator simply wanted the victory. Labonte had squeezed past Earnhardt to momentarily take the lead and Earnhardt immediately spun him out of his way.

The crowd at the packed Bristol bullring jeered Earnhardt’s aggressive move, and the seven-time champion dismissed the criticism.

“Didn’t mean to really turn him around, meant to rattle his cage, though,” said an unapologetic Earnhardt.

Two decades later, there is so much more on the line as NASCAR returns to Bristol on the anniversary of one of the most famous finishes in series history. There are only three races left to make the playoffs and only nine drivers have locked in their slots. Jimmie Johnson is on the outside of the top 16, desperately trying to work his way into a chance to race for a record eighth championship.

As NASCAR looks back — fondly, no doubt — on that hot summer night showdown between a pair of Hall of Famers, perhaps there needs to be a whole lot more cage rattling at this stage of the season.

Bristol, particularly its August race around the 0.533-mile concrete, gladiator-style oval, was always one of the toughest tickets in NASCAR and boasted 55 consecutive sellouts from 1982 through 2010. The track accommodated 30,000 fans at the start of the streak, but expanded as most NASCAR promoters did during the 1990s to an obese 161,000 seats because fans were pouring through the gates in record numbers at venues across the country.

When the 2008 economic crisis began, and fans were no longer willing to pay inflated prices for hotels along the Tennessee/Virginia line, the crowd began to dwindle. The sellout streak ended two years later, Bristol’s great Coliseum has removed roughly 20,000 seats since and the track didn’t even bother selling tickets in the turns for the spring race in April. In a cruel twist, the Darrell Waltrip grandstand was closed on the same weekend the 12-time Bristol winner announced his retirement as Fox Sports’ longtime analyst.

The cost of a weekend at Bristol — the get-in price on the track website Monday was $80 and lodging is typically $300 or more per night at nearby motels — has certainly harmed attendance for the former bucket list sporting event at a track that marketed itself as the site of a raging tempest where drivers could lose their cool and explode in anger. Jeff Gordon once shoved Matt Kenseth, Tony Stewart threw a helmet, middle fingers are the common form of communication and tempers are typically at the boiling point.

Of course, fans can argue the racing just isn’t the same as it was in 1999 when Earnhardt used his bumper to win a race. First came alterations to the Bristol track surface. Then drivers became scared of upsetting a sponsor with bad behavior. NASCAR’s rules package has since eliminated many of the opportunities for the bumping and banging that made the sport so popular.

Drivers also don’t want the drama that comes with a feud. Johnson and Ryan Blaney found themselves embroiled in a weeklong saga after the two made contact two races ago, Johnson felt Blaney showed a lack of respect, and Blaney didn’t back down from his position. It took a conversation over beers to smooth things out between the two, but it was a headache neither wanted as they jockey for berths in the 16-driver playoff field.

Problem is, NASCAR needs rivalries and controversies and drivers willing to rattle a cage to get a win.

Especially now, in a rebuilding period for NASCAR, and with seven slots open in the playoff field. Blaney, Aric Almirola, William Byron, Kyle Larson, Erik Jones, Ryan Newman and Clint Bowyer are all mathematically eligible to make the postseason, but Daniel Suarez, Johnson and Paul Menard are lurking.

Bristol was once a special stop on the NASCAR circuit for its intense on-track action and the anger it aroused in the field. It’s time to race hard again, to take no prisoners at Bristol and lock down playoff berths. There’s too much on the line to play nice or race for points, and it would do the sport a world of good if the drivers attacked Saturday night the same way Earnhardt did 20 years ago.

MATT DIBENEDETTO OUT AT LEAVINE AFTER THIS NASCAR SEASON

CHARLOTTE (AP) — Matt DiBenedetto has been told by Leavine Family Racing he will not be brought back for a second season with the NASCAR team in 2020.

DiBenedetto called it “devastating news” in Thursday social media posts. He’s enjoying the best season of his career while driving the No. 95 Toyota and is ranked a career-best 23rd in points. He has four top top-10 finishes in the past eight races.

DiBenedetto’s post said the team told him Tuesday he was out. In a statement, the organization called DiBenedetto “a talented young driver.”

Leavine Family Racing has an alliance with Joe Gibbs Racing, and that team does not have enough seats to give its many young drivers. DiBenedetto will likely be replaced by either Christopher Bell in a promotion from the Xfinity Series, or Erik Jones if Gibbs moves Jones to Leavine to make room for a Cup seat at JGR for Bell.

DiBenedetto is likely to be a candidate for Front Row Motorsports’ No. 38 Ford. David Ragan said Wednesday he won’t drive full-time after this season.

Ragan said Wednesday in a statement from Front Row Motorsports that he will race on a part-time basis in 2020 in NASCAR and other series.  The 33-year-old Ragan cited his desire to spend more time with his wife and two daughters in walking away from the 38-race, full-time job as a NASCAR driver.

Said Ragan: “My children are growing up quickly, and I want to concentrate my time in being the best father and husband I can be.”

Ragan made his Cup debut in 2007. He has 457 career Cup starts, with two victories. The Georgia-born Ragan was NASCAR’s rookie of the year in 2007.

CHARLOTTE (AP) — This was supposed to be the breakout year for Ross Chastain, whose hard work caught the eye of a sponsor who promised to fund the eighth-generation watermelon farmer in the best ride of his career.

Chastain was moving up to a competitive car in the Xfinity Series with a true chance to compete for the championship in NASCAR’s second-tier series.

Then the sponsor was raided in December by the federal government and the deal vanished. Chip Ganassi had to shut down his Xfinity program and Chastain had less than two months to scrape together work for this season.

The saga didn’t end there. He got a full Truck Series schedule with Niece Motorsports but declared in his NASCAR paperwork that he was racing for the championship in the Xfinity Series, all while trying to add elite Cup Series races to his schedule.

But when he won at Kansas Speedway in the seventh Truck Series race of the season, Chastain made the unprecedented decision to change course and register as a candidate for that championship.

“There were a lot of sleepless nights,” Chastain said this week. “I made my own choice, the decision was mine, but it did start out of our control. I didn’t make the first decision that set this in motion. There came a point in (Xfinity) where we just weren’t going to be competitive. We just felt like we were getting punched in the nose over and over.”

The swap to race for the championship in NASCAR’s third-tier national series has turned out to be the best decision Chastain could make in this roller-coaster year. The 26-year-old Florida native is considered one of the favorites to win the title when the playoffs begin Thursday night at Bristol Motor Speedway.

The eight-driver field is led by regular-season winner Grant Enfinger, reigning series champion Brett Moffitt, two-time series champion Matt Crafton and 2016 champion Johnny Sauter. It is rounded out by Stewart Friesen, winner of his first career race two weeks ago on the dirt at Eldora Speedway; Austin Hill, who in sponsorship gamesmanship got Moffitt’s ride after Moffitt won the title; rookie Tyler Ankrum; and Chastain.

Ankrum missed the first three races of the season because he didn’t turn 18 until March, but he earned a slot in the playoffs with a surprise victory at Kentucky. It’s not lost on him how far he has come in 13 races at the national level.

“Honestly I didn’t even have the confidence in myself to even win a stage,” when he debuted,” said Ankrum. “So the fact I am here now is surreal.”

Chastain leads all playoff drivers with three wins this season. But his statistics are more complicated than the numbers indicate.

When he decided to run for the Truck Series title, he was starting at zero with no points and his Kansas victory did not count in qualifying for the postseason. But just two races later, he won at Iowa, only to become the first driver to be disqualified under NASCAR’s zero tolerance policy on failing post-race inspection.

Chastain answered a week later with a victory at Gateway, and led all but six laps in a dominating win at Pocono.

Moffitt won the season finale last year to claim his first national title, and believes that will be how the title is decided again this year.

“Whoever wins Homestead is going to win the championship, if you make it that far, you are going to have to win that race,” Moffitt said. “Ross, he’s been fast all year and proven he can win and is getting it done.”

Chastain welcomed Moffitt’s assessment that Chastain just might be the early favorite to win the Truck Series’ seven-race playoff series.

A year after record-setting season, Red Sox limp to October