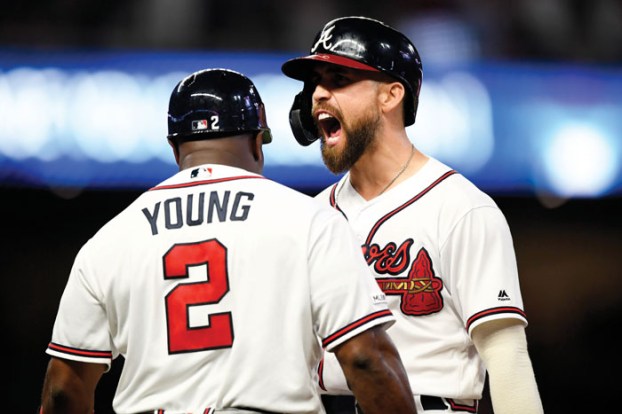 Atlanta Braves' Ender Inciarte shouts as coach Eric Young talks to him after Inciarte hit an RBI single during the seventh inning of the team's baseball game against the New York Mets, Wednesday, Aug.14, 2019, in Atlanta. (AP Photo/John Amis)

Braves rally, then hold on — again — to beat Mets 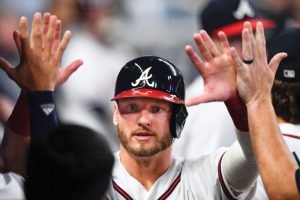 Atlanta Braves’ Josh Donaldson is congratulated in the dugout after scoring on an Ender Inciarte line drive double to left field during the second inning of a baseball game against the New York Mets, Wednesday, Aug. 14, 2019, in Atlanta. (AP Photo/John Amis)

By CHARLES ODUM AP Sports Writer
ATLANTA (AP) — Tyler Flowers drove in a tiebreaking run with an infield hit, and the Atlanta Braves scored five runs off Seth Lugo in the seventh and survived a ninth-inning scare in a 6-4 win over the New York Mets on Wednesday night.
The Mets have lost three straight, including the first two of the three-game series with Atlanta, after winning 15 of 16 to move up in the NL wild-card chase.
New York scored two runs in the ninth off Mark Melancon. Amed Rosario had four hits, including a run-scoring single off Melancon. Pinch-hitter Luis Guillorme added another run-scoring single before loading the bases.
A lengthy review overturned the on-field call that Guillorme was out at second on Pete Alonso’s grounder to Ozzie Albies. Shortstop Johan Camargo dropped the throw from Albies for an error, leaving the bases loaded with one out.
Melancon struck out Wilson Ramos before left-hander Jerry Blevins struck out Michael Conforto for his first save.
J.D. Davis gave New York a 2-1 lead with a two-run single in the seventh, when Steven Matz had his second bloop single to right field.
After he was left in the game to hit, Matz was removed by manager Mickey Callaway after throwing only 79 pitches and allowing only two hits in six innings. Matz retired 14 consecutive batters before being lifted.
The move backfired when the NL East-leading Braves scored five runs on six singles off Lugo and Luis Avilán in the seventh. All five runs were charged to Lugo (5-3), who recorded only one out.
After Lugo walked Josh Donaldson to open the inning, the Braves had four straight singles. Ender Inciarte’s bases-loaded hit to left field tied the game. Flowers then hit a grounder which first baseman Pete Alonso couldn’t snag while running toward second. Lugo was late to cover first.
Pinch-hitter Matt Joyce, Ronald Acuña Jr. and Ozzie Albies also drove in runs in the big inning.
Inciarte drove in two runs with two hits.
Dallas Keuchel threw six scoreless innings before the Mets’ two-run seventh against Sean Newcomb and Chris Martin (1-1). Keuchel, making his first career start against the Mets, regrouped after allowing a season-high eight runs in a 9-2 loss at Miami in his last start.
The Mets’ streak of six straight series wins ended as the team was forced to adjust to placing All-Star Jeff McNeil on the 10-day injured list with a mild left hamstring strain.
Rubén Tejada, recalled from Triple-A Syracuse, was held without a hit as he started at second base. Callaway said he plans to have Tejada start against left-handers in a platoon with Joe Panik.
With runners on first and third in the sixth, the Mets couldn’t score. Todd Frazier’s pop fly into shallow right field was caught by first baseman Freddie Freeman, who was running down the line with his back to the infield.
The Braves’ only run against Matz came in the second. Donaldson led off with a single up the middle and scored on Inciarte’s double down the left field line.
The start of the game was delayed 1 hour, 12 minutes by rain.
TRAINER’S ROOM
Mets: This is McNeil’s second IL stint with a left hamstring injury this season. He also was on the IL from May 23 to June 4. … OF Brandon Nimmo (neck), who has been out since May 21, could begin a rehab assignment in about a week.
Braves: Flowers needed attention from a trainer for a cut on his head after he was hit by Pete Alonso’s bat on Alonso’s swing and miss in the seventh. Flowers remained in the game.
UP NEXT
Marcus Stroman (6-11, 3.07) will face the Braves for the first time with the Mets in Thursday night’s final game of the series. With Toronto, Stroman was 2-0 with a 0.71 ERA in two starts against the Braves. Julio Teheran (7-7, 3.35) is 10-8 with a 2.68 ERA in 28 career games against the Mets, including a 1-1 record and 6.08 ERA in three starts this season.
___
More AP MLB: https://apnews.com/MLB and https://twitter.com/AP_Sports