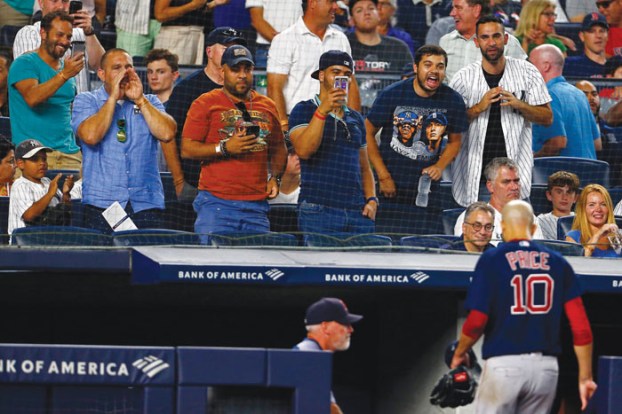 Fans yell at Boston Red Sox pitcher David Price (10) as heads for the dugout during the third inning of a baseball game against the New York Yankees on Sunday, Aug. 4, 2019, in New York. (AP Photo/Adam Hunger)

A year after record-setting season, Red Sox limp to October

BOSTON (AP) — Red Sox baseball boss Dave Dombrowski gave up on a fourth straight AL East title when he decided not to make a move at the trade deadline.

The players bowed out of the postseason race soon after.

One year after their record-setting run to their fourth World Series in 15 seasons, the Red Sox are on their way toward missing the playoffs for the first time since 2015. After taking five of six leading up to the July 31 deadline from New York and Tampa Bay — the two teams Boston is chasing in the AL East — the defending champions won just three of their next 15 games.

Alex Cora, who led Boston to a franchise-record 108 wins in his first year as a major league manager, acknowledges there’s no more time to waste.

“It actually did feel like a playoff game,” he said after beating Cleveland this week to slow the slide. “If we want to make it, we’ve got to start our playoffs before anyone else.”

It may already be too late.

The Red Sox are closer to fourth than first, 17½ games out in the division and 7½ back in the wild-card race. They have just four more games against each the Yankees and Rays, and none against Cleveland or Oakland, who are also ahead of Boston in the wild-card standings.

Dombrowski conceded at the deadline that this team wasn’t going to catch the Yankees, and he said he didn’t want to give up a lot for a spare part that would get them into the one-game coin toss that is the wild-card round.

“If we were closer to first place, I would’ve been more open-minded,” he said. “I think if we’re going to make it, it’s going to be the guys that are in the clubhouse.”

The response from the clubhouse: losses in the next six games — eight straight in all — including a four-game sweep by the Yankees that all-but eliminated Boston from the postseason race.

Here are some other things that went wrong this season:

Last year’s moves all seemed to work out: Dombrowski acquired J.D. Martinez during spring training, added Steve Pearce in June and, as the deadline approached, Nathan Eovaldi and Ian Kinsler. Martinez finished fourth in AL MVP voting, Pearce was the World Series MVP, and Eovaldi was the Game 3 star who pitched six innings of relief in an 18-inning loss, a performance widely credited with keeping the rest of the staff fresh for victories in Games 4 and 5.

This year, Eovaldi and Pearce got rewarded as free agents. Pearce batted .180 in just 29 games while spending most of the season on the injured list; Eovaldi missed two months with an elbow injury and was slotted into the bullpen when he came back.

And the big midseason acquisition: Andrew Cashner, who went 1-4 with an 8.01 ERA in six starts after coming from Baltimore early in July; he has since been demoted to the bullpen.

Cashner was supposed to boost the back end of a star-studded staff that has been the biggest disappointment for the team this year.

“Some guys haven’t performed,” Dombrowski said in his post trade deadline news conference. “Where are we going to get starting pitchers that are more talented than the group that we have? They’re very talented, we just need to pitch better in some cases.”

After letting closer Craig Kimbrel and top setup man Joe Kelly leave as free agents, the Red Sox are the worst team in baseball at converting save opportunities, with 22 blown saves in 46 chances through Wednesday. But Dombrowski insists that when the starters provided quality outings, the bullpen was fine.

Leading up to the trade deadline, the rotation turned in six straight outings of six innings or longer. During an eight-game losing streak that knocked them from wild-card contention, only one starter finished the sixth.

“Where most clubs get exposed in their bullpen is when you get short starts. Our club is built to get longer starts than four or five innings,” Dombrowski said, explaining why he didn’t go all-out to add a reliever. “When we start pitching six innings, I think you could see it.”

DETROIT (AP) — The Seattle Mariners overcame a slow start and found a way to get past the Detroit Tigers on Thursday.

Kyle Seager drove in three runs, including two in a three-run third inning, and the Mariners topped the Tigers with a 7-2 victory.

“I don’t think we were ready to go in the first couple innings,” Mariners manager Scott Servais said. “It was a day game and we were still waking up.”

Mallex Smith stole two bases in three attempts, giving him 34, the most in the majors.

“I thought I had a great jump on the third one, but (John) Hicks got me,” he said.

The Mariners won two of three in the series after losing eight of their previous nine, thanks in large part to Seager. He hit three homers in Tuesday’s win and drove in six runs.

“Kyle had some big hits for us,” Servais said. “We haven’t had many series wins lately, so this is a good way to start the road trip.”

Detroit finished 4-7 on its 11-game homestand to fall to 17-43 at home. The Tigers need to win five of their last 21 games at Comerica Park to avoid reaching 60 losses at home.

“I think our offense was a little better on this homestand — at least it felt that way from the dugout,” Tigers manager Ron Gardenhire said. “But we’re not getting enough hits in big situations, and we didn’t do much of anything today.”

“This is something I’m used to, whether I come in for the second, third or fourth,” he said. “I know what day I’m going to pitch and the preparation is somewhat the same. It’s just delayed a bit.”

Milone left after allowing a leadoff single in the sixth, but picked up his first win since May 27.

“With (Miguel) Cabrera coming up, I thought it was a good idea to start using the righties in our bullpen,” Servais said.

Turnbull struck out seven batters in the first three innings, but only retired the side in order in the first. The Mariners put two runners on in the second and scored three runs in the third.

With two outs and a runner on first, Omar Narváez’s double put two runners in scoring position. They both came home on Seager’s double before Austin Nola made it 3-0 with an RBI single.

“The pitch to Seager was just a bad idea,” Gardenhire said. “It’s a 2-2 pitch and he’s gotten him to chase two pitches outside the zone. Throw something in the dirt, don’t throw a curveball down the middle.”

Víctor Reyes led off the fourth with a triple that scooted under Smith’s glove. Dawel Lugo followed with a sacrifice fly to pull Detroit within 3-1 before Miguel Cabrera hit his ninth homer of the season.

“I definitely should have cut that off,” Smith said. “I think it disappeared when I was trying to field it. I got done by a disappearing ball.”

“I can never be satisfied about anything like this,” said Cabrera, who has become a full-time DH because of knee problems. “I won’t be satisfied unless I’m producing for my team the way I always did.”

Moore led off the seventh with a homer off Matt Hall to move the Seattle lead to 4-2 and Narváez added an RBI single later in the inning.

Smith’s flare to center made it 6-2 in the eighth, and Seager added an RBI single in the ninth.

Mariners: Felix Hernandez (shoulder) pitched four scoreless innings Wednesday in a rehab start for Class A Everett, striking out eight. … RHP Brandon Brennan was placed on the injured list with shoulder fatigue. The team does not believe the injury to be serious but didn’t want to be short-handed in the bullpen.

Tigers: LF Christin Stewart (concussion) and C Grayson Greiner (back) started rehab assignments on Wednesday. Greiner went 0 for 4 for Class A Lakeland while Stewart went 2 for 5 for Triple-A Toledo.

After going 4-7 at home against three of the American League’s poorer teams — the White Sox, Royals and Mariners — the Tigers now face a 10-game trip against the Rays, Astros and Twins.

“This is going to be a big challenge,” Cabrera said. “We’ve got a lot of young guys here and a lot of prospects in the minors, and we need to start getting them ready to play in big games.”

Mariners: After a quick international flight, Seattle will start a three-game series against the Toronto Blue Jays on Friday. A Mariners opener will pitch the first game against Jacob Waguespack (3-1, 4.31).

Associated Press ELIZABETHTON, Tenn.— Dale Earnhardt Jr. will take the weekend off from broadcasting to be with his wife and... read more