Snake in the grass: A recent copperhead bite points to a trend 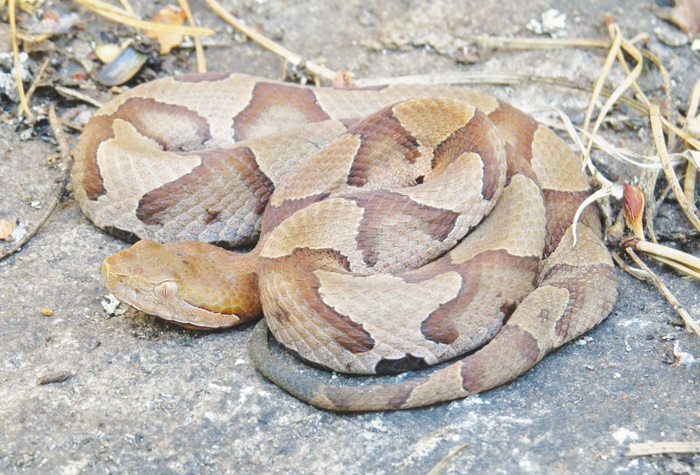 Copperheads are found across North Carolina and account for 10 times more venomous bites than other snakes combined. WUNC photo

SALISBURY — It’s hard to believe, but I’ve lived 60-plus years and have never known someone who was bitten by a snake.

Until now. Let me introduce you to Steve Jarrett, a friend whom a copperhead took a liking to this past Friday night. 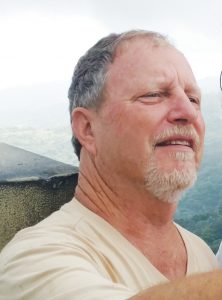 Steve is fine. He’s still feeling some pain and has swelling around his right ankle, but he’s pretty much back to work as usual — a man in constant motion, as most people know him to be.

At its severest, Steve says, the pain felt as though someone kicked his ankle with a steel-toed boot, maybe several times. As for the swelling, “it’s gone down,” Steve reports, “but it’s not normal yet.”

Steve and his wife, Celia, have a getaway home in a Lake Norman cove outside Mooresville. About 10 p.m. Friday, they were visiting with their neighbors, who have a patio down by the water.

Earlier that day, the neighbor had killed two copperheads in his yard, judging that the chirping cicadas had drawn them to the trees. As the Jarretts and the neighbor left the patio that night and started walking across his grass toward the house, they carried flashlights and actually were on alert for snakes.

“Dang, something stung me,” he told Celia.

“What do you mean something stung you?” she said.

Celia grabbed the flashlight and sure enough she spotted a snake, whose head was up, sort of in an attack posture with the rest of his body hidden in the clover.

“I called 911 just to ask what to do,” Steve says, but the local EMS decided to send a unit as soon as it heard it was a snakebite.

Steve did all the right things. He didn’t panic. He kept his foot still. He called 911.

“By the time I got to the hospital, it was hurting,” Steve says.

The doctor and nurses at Lake Norman Regional Medical Center started him on IVs, gave him an antibiotic shot and kept monitoring him. On occasion a nurse would come in with a measuring tape to see how much the swelling was increasing.

Steve says he didn’t have any of the concerning symptoms doctors look for after a venomous bite such as a feeling of weakness, a high heart rate, low blood pressure, labored breathing, vomiting, confusion and numbness.

In all, it was a four-hour ordeal before he and Celia headed back to their lake house Saturday morning.

The offending copperhead was killed, by the way. The always-thinking Celia put the dead snake in a zip-lock bag and stuffed it into her purse so the folks at the hospital would know for sure it was a copperhead.

The medical team took pictures of the snake and compiled information for the Carolinas Poison Center.

Copperheads generally grow 2 to 3 feet in length. Steve characterizes this one as “kind of a smaller snake” but still one that packed a wallop. He had one puncture wound on his ankle, and several people told him the snake had administered “kind of like a dry bite,” Steve says.

He wonders what “dry” really means, because he’ll tell you quickly something caused his pain and swelling.

“We went out the next day, and Celia bought a pair of boots,” Steve says. “Paranoia has set in on her.”

It just so happens the same day Steve Jarrett became a copperhead victim, The Wall Street Journal published a story saying North Carolina, Georgia and Texas are on track to break records for venomous snakebites in 2019.

In North Carolina and Georgia, for example, the number of reported venomous bites are up 10 percent this year, the newspaper said. The Journal story laid a lot of the blame for the increasing bites on climate change — record rainfall over the past year — and sprawling suburbs where people are populating more of the snakes’ habitat.

For the record, North Carolina has 37 species of snakes, of which only six are venomous — the copperhead, cottonmouth, three varieties of rattlesnake and coral snakes, though no coral snake bite has been recorded in about 20 years.

Copperheads are present in all of North Carolina’s 100 counties, and by far, they account for most of the venomous bites — 10 times more than the other snakes combined.

The United States sees 8,000 to 10,000 snakebites a year, of which 30 percent are venomous. On average, only five deaths occur annually from a poisonous snakebite.

The Carolinas Poison Center, which has doctors and nurses available around the clock, checked on Steve over the weekend to see if he had any questions or concerns.

Someone from Lake Norman Regional Medical Center also followed up with a call Monday.

Those follow-ups impressed Steve, who I have now made a walking public service announcement for being on the alert for copperheads.

Some quick tips from the Carolinas Poison Center on protecting yourself: Be aware that copperheads and other snakes can be under shrubs and in the grass and pine straw. If you’re going to work in a garden or flower bed, rake it a little first to help scare them away.

For picking up sticks and yard debris, don’t be above using a grabber. When doing yard work, wear closed shoes and long pants. Be sure to check boots and shoes that have been sitting outside or in your garage.

Overall, watch where you’re going, even though the Jarretts were, and that snake still nipped Steve.

The Jarretts’ Lake Norman neighbor was apologetic the next day, feeling bad about the whole snakebite thing and telling Steve how sorry he was that it happened.

Steve told him not to worry. Their lawyers will be able to work something out.

Even a copperhead hasn’t stolen his sense of humor.