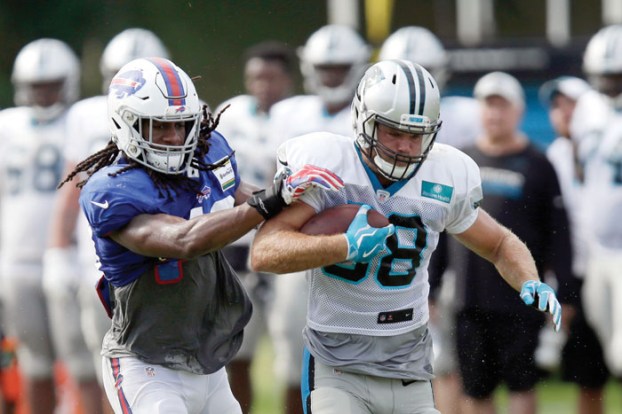 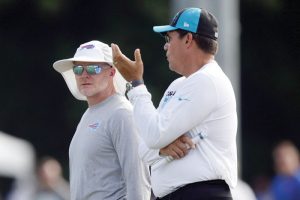 The Panthers wrapped up two days of practices at Wofford College with the Buffalo Bills that he thinks will go a long way toward helping both teams prepare for the regular season. Unlike preseason games, players weren’t allowed to tackle which Rivera believes can be dually beneficial in getting plays down pat while at the same time not risking major injuries.

“I’m not sure if playing the games is as important as it used to be, but things like this are invaluable,” Rivera said Wednesday.

This is the third time in five seasons the Panthers have practiced with another team.

“If you can get two teams that come in focused on working and developing you can help each other out a lot,” Rivera said.

Rivera didn’t play his starters in the preseason opener against Chicago, but said they will get some work in in Friday night’s game against the Bills. Quarterback Cam Newton, who is coming off arthroscopic shoulder surgery in the offseason, is expected to play.

Other things from the joint Bills-Panthers joint practice:

Buffalo’s 21-year-old middle linebacker Tremaine Edmunds has a chance to be an impact player for the next decade, Rivera said.

“We ran one screen against them and it looked like we were going to pick up some pretty good yardage and he ran it down to keep it to about a 4-yard gain,” Rivera said.

Edmunds had 80 tackles, two sacks and two interceptions last season as a rookie.

New Bills receiver Cole Beasley said he’s starting to get on the same page with second-year quarterback Josh Allen. On one option route, Beasley turned his head and the ball had already arrived perfectly on time.

“The ball got on me so fast I almost didn’t expect it,” Beasley said. “I told him if you get the ball to me that fast I’m going to get you a lot (of yards) after the catch. It makes it so much easier on me and it will make us so much better as a team.”

Wide receiver Curtis Samuel was clearly the star of training camp for the Panthers, hauling in everything in sight and emerging as the team’s potential No. 1 receiver. But Rivera doesn’t expect the Panthers to have one standout wide receiver this season but rather the production to come from a number of different players.

“The whole idea is to keep the ball spread so nobody can focus in on one guy,” Rivera said. “When you have playmakers, you just want to make sure you get the ball into their hands.”

The Panthers announced that former quarterback Jake Delhomme will join the team’s radio broadcast team for 10 games and former offensive tackle Jordan Gross for six games. Both are new members of the Panthers Hall of Honor.

The charismatic Delhomme joked that “he doesn’t want to have diarrhea of the mouth.”

Panthers first-round draft pick Brian Burns tried to practice, but his ankle was still too sore after he tweaked it on Tuesday. However, the outside linebacker said he expects to play Friday night.

Wednesday likely marked the end of an era for the Panthers.

They’ve held their training camp at Wofford College for the past 25 years, but the contract between the team and the school has expired and new Panthers owner David Tepper said he’s considering moving camp to Charlotte, North Carolina next summer where he recently built a practice bubble.

“It’s been very good for us and I really do appreciate the people here at Wofford,” Rivera said. “Who knows? We’ll see what happens.”

Sergeant Christopher Knox of the North Carolina Department of Public Safety says troopers pulled over the 25-year-old Cox on Interstate 85 northbound near Bessemer City for driving 90 mph in a 65 mph zone in a 2015 Nissan. Cox was cited for possessing less than a half-ounce of marijuana. He has an Oct. 14 court date.

The incident came about an hour after the Panthers broke camp at Wofford College in Spartanburg, South Carolina, and players began returning home to Charlotte, North Carolina.

The Panthers released a statement on Wednesday night saying “the club is aware that Bryan Cox Jr. was cited by law enforcement today. We are gathering information and have been in contact with the NFL and Bryan. We will have no further comment at this time.”

Cox has been with the Panthers since 2017. He’s the son of Bryan Cox, who played 12 seasons in the NFL and was named All-Pro three times.

After 3 bowl wins, Wake Forest looks to take next step