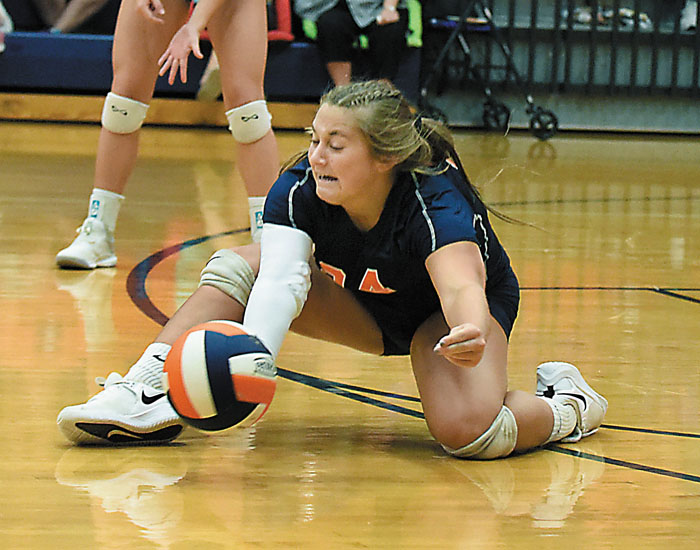 Wayne Hinshaw file photo/for the Salisbury Post ... Carson libero Kary Hales, All-County as a sophomore last season, returns for her junior year. She is also an All-County softball player for Carson as well.

CHINA GROVE — Carson has been the county’s volleyball school over the last decade.

There’s not really any argument about that. In coach Kelan Rogers’ 10 seasons in China Grove, Carson has finished as 3A state runner-up twice and has won 22 playoff games. The rest of Rowan County has combined all-time for 20 playoff victories — seven by East Rowan, six by West Rowan, four by South Rowan and three by Salisbury.

West Rowan is peaking, has two unbelievable players, has split regular-season games with Carson the past two years, and shared last year’s North Piedmont Conference title with the Cougars.

Can Carson, which has averaged 25 wins per year for 10 years, continue to do what it’s been doing? Can the Cougars continue to win not only county matches but NPC matches against West Rowan and the strong Iredell programs? Can Carson make another exciting playoff run?

Those are reasonable questions. On paper, as far as proven players coming back, Carson doesn’t look scary, especially with Mallory Weast no longer flying around.

Juniors Jaden Vaughn and Kary Hales are all-county standouts and senior Katie Blackwell is experienced and reliable, but there’s some mystery involved as far as the rest of the lineup.

“Vaughn, Hales and Blackwell are solid, they work hard and we believe they’ll be leaders for this team,” Rogers said. “We plan on being a good team every year, and we expect to be good again. We have a varsity roster of 14 and we believe all 14 can play.”

Rogers, an N.C. State grad and a biology teacher, graduated from East Rowan in 1986.

One of his goals was to help raise the bar for Rowan volleyball. He’s succeeded in that.

“Iredell County girls are playing real volleyball when they’re in the third grade,” Rogers said. “There was a time when they laughed at Rowan County volleyball and Rowan girls weren’t starting until they were in high school. But Rowan volleyball is no joke now. It’s pretty even now. Last year, the difference between first and fourth place in our league — between Carson, West Rowan, North Iredell and South Iredell — was as thin as a piece of paper.”

The six-team NPC is so strong that East Rowan went 0-10 in the league and still made the 3A playoffs because of its strength of schedule.

“We lost at North Iredell and we lost at West Rowan,” Rogers said. “To tie for first, we had to win two five-set matches against South Iredell, the fourth-place team. That’s how tight our league was.”

Playing on its home floor, Carson beat North Iredell and South Iredell to win the 2018 conference tournament. Those wins provided enough momentum to carry the Cougars through three home playoff wins, but Carson lost in the fourth round when it had to travel to West Henderson.

Vaughn was a major part of Carson’s 26-win season, producing more than 300 kills and 300 digs. She’s tall (5-foot-10) and agile and will be a high-percentage hitter from the right side or the middle. There were times last season when she was even better than Weast.

Hales dominated some matches from her libero position, which isn’t easy to do. She averaged 24 digs per match and made over 700 digs for the season.

Blackwell, an outside hitter, topped 300 digs and 100 kills and was one of the team’s most effective servers.

Hales, Vaughn and Blackwell are all excellent at serve-receive and are skilled at getting Carson’s offense started with an accurate pass to the setter.

Grace Thomas was a quality setter for the Cougars the last two seasons and won’t be easy to replace. Carson has two players listed on the roster as setters — juniors Tate Barger and Alicia Thompson. Rogers said he might play both of them.

Seniors Leah Cauble and Ella Cloninger were situational players a year ago, contributed quite a few digs defensively, and are ready for bigger roles.

Carson players generally get better every year. Last year, Gamewell made a huge jump as a senior.  Cauble and Cloninger may do the same.

“We do build some good players through our program,” Rogers said. “We don’t have a lot of girls who are ready to play varsity for us as freshmen because they probably aren’t going to be as good as the girls who have been playing on our jayvee team.”

“We’ve got a lot of girls who are looking great in practice,” Rogers said.  “We’ll just have to see if they can keep playing that well when the games start.”

Carson finished last season ranked 10th in the state by MaxPreps and fifth in 3A.

“That was the year after we graduated eight seniors who were all recruited at some level,” Rogers said. “We had three returning varsity players, and then we had injuries. But no excuses. We expect to be good every year — no matter what.”

Carson starts the regular season at Wheatmore on Aug. 21.

The Cougars open NPC play at home against North Iredell on Sept. 17.

Carson takes on West Rowan on Sept. 26 and Oct. 15  and will battle South Iredell and UNC commit Marissa Meyerhoefer on Oct. 1 and Oct. 17.