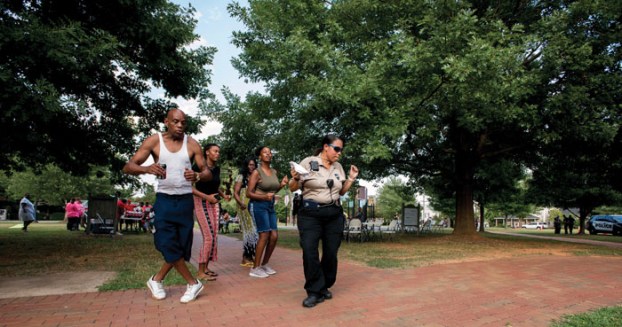 Laurel to the Salisbury Police Department for its new, interactive neighborhood map launched in conjunction with National Night Out last week.

The map, available at salisburync.gov/officermap, gives neighborhoods the ability to connect with officers assigned to their community.

Folks who live near City Park, for example, have Officer Peacock assigned as the day shift patrol officer and Officer Lusk as their night shift patrol officer, according to the map. The map also provides contact information for assigned traffic enforcement and community service officers, sergeants and the department’s victim advocate.

Deputy Police Chief Shon Barnes gave the suggestion of asking officers to speak at an event as a way community members might use the map. Chief Jerry Stokes said locals can also share concerns, complaints or incidents that are not emergencies. Of course, any emergency should still be routed through 911.

We think Barnes said it well.

“People living in the neighborhood should know who represents them,” he told reporter Shavonne Walker in a story published Sunday (“Police launch map to connect neighborhoods with police officers”).

Laurel to the remarkable results that the Rowan Economic Development Commission is producing under the leadership of President Rod Crider.

Chewy.com’s fulfillment center on Long Ferry Road will be an extraordinary and one-of-a-kind project for the county, bringing more jobs at one time than any other project in the county’s history. Henkel just announced a $45 million expansion in Salisbury in July

There are other projects on the way, too, including a yet-to-be-named company that proposes to add 191 jobs at a newly constructed speculative building in Granite Quarry.

Ron Starner, the keynote speaker at the EDC’s annual meeting last week, said Crider is one of the top five economic development professionals in the nation, and the results he’s already producing in Rowan prove that.

Laurel to Rowan County commissioners for finding a way to repurpose the former Cleveland Elementary School.

Just because schools no longer house students does not mean that their useful life has ended. In Cleveland, the former elementary school’s new life includes a branch of the Rowan Public Library and an emergency medical services station.

Meanwhile, Woodleaf Elementary School is still waiting for its second life, as it was also a victim of consolidation into West Rowan Elementary.

Commissioners have talked about creating a park at the former school, and we hope those discussions continue. Perhaps commissioners could leave the gym, making small upgrades, for the community to use.

Editorial: Referendum should be easy vote for Salisbury council

The Salisbury City Council has an easy vote in about a week, and minutiae should not prevent a unanimous decision.... read more