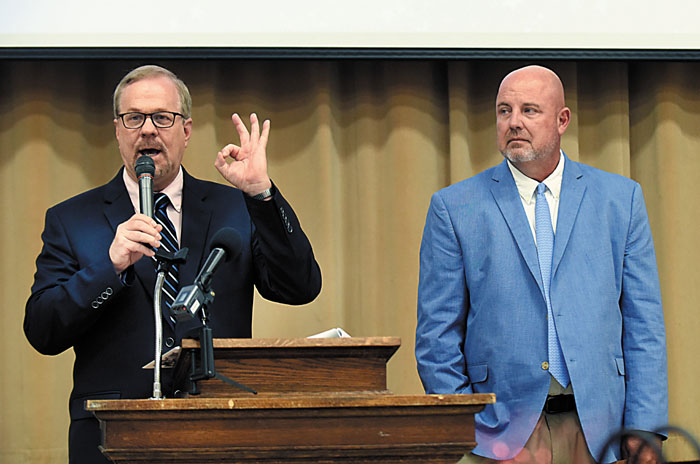 SALISBURY — There were nine in the lineup, like a baseball team.

Batting second — his designated place on the alphabetized list of the Salisbury-Rowan Hall of Fame Class of 2019 — West Rowan boys basketball coach Mike Gurley smacked a home run with an acceptance speech that was equal parts hilarious and emotional.

Gurleys aren’t born, they’re made — with lots of blood, sweat and tears.

Gurley never stomped, although that’s been his trademark maneuver. Those who put a stopwatch on him said his acceptance speech lasted 25 minutes. Predictions had been for considerably longer, as Gurley, throughout his entertaining career, has rarely been at a loss for words.

Gurley’s departure from the podium after his lengthy stay provided an opportunity for master of ceremonies Kent Bernhardt to quip, “Thanks to all of you for joining us today!” as if the party was over. But it was just getting started.

It was quite a Sunday afternoon at the Salisbury Civic Center. Festivities lasted more than 2.5 hours, one of the longest ceremonies in a 19-year run, but the bottom line was that the Salisbury-Rowan Hall of Fame was far stronger at the end of the day than when it began. Now it includes the county’s winningest basketball coach, the county’s all-time leading basketball scorer, the football coach who raised the bar for everybody and the pitcher who produced the best season any Rowan athlete has ever enjoyed in big league baseball.

Kluttz and Young were honored posthumously. Their plaques were accepted by their widows, Stephanie Rivers-Kluttz and Dianne Young, with the support of numerous family members.

Gurley’s West teams have won 409 games in his 22 seasons, making him the county’s all-time leader for the sport. Among other declarations, he opined that his 2001-02 team, which got a 61-game winning streak started, was the strongest in county history. It would get a lot of votes, but there are followers of Salisbury and North Rowan who might argue.

Basketball can be humbling as well as uplifting. Gurley’s 1998-99 Falcons reached the 3A state championship game — where they allowed a record 103 points.

“We got killed,” Gurley said.

Click here to view more photos from the Hall of Fame ceremony.

Basketball rarely humbled Fields, who poured in an incredible 2,783 points for Salisbury High, making her the all-time scoring leader for Rowan County, male or female. She led tremendous teams, transforming the Hornets from a losing program to a dominant one, and that’s the athletic accomplishment in which she takes the most pride.

The 31-0 team she led in 2003-04 may have been the county’s all-time best. She was a three-time player of the year for the county and was twice All-State.

Her career beyond high school wasn’t quite as spectacular, but it was excellent. She was team captain at N.C. State for two seasons, scored more than 1,000 collegiate points and was team MVP and All-ACC as a senior.

Professionally, Fields filled it up for her team in Iceland, averaging 23.8 points and taking her team from worst to first.

Fields started playing at age 5 at Hall Gym and still competes in recreation leagues. She turned 32 in March, making her the youngest Salisbury-Rowan Hall of Famer.

Young was not exceptional in his playing days at East Rowan and Guilford, but he became a coaching legend.

Hired by Henry Kluttz to coach West Rowan’s football team when he was a 26-year-old Davie County assistant, Young was the helm of the Falcons from 1998 to 2014. His record was 172-54. His wins total is second in Rowan history only to Spencer W. Lancaster who coached J.C. Price High during its gridiron glory days in the 1940s and 1950s.

Young piloted West, which opened in 1959, to its first-ever conference title in 2000 by beating A.L. Brown and Concord on back-to-back weeks. Young coached three consecutive 3A state title teams (2008-10) with players such as K.P. Parks and Chris Smith and put together a state runner-up season in 2011. West had a 46-game winning streak during Young’s championship seasons, the nation’s longest at the time. West also put together a 44-game county game county winning streak that started in 2001 and lasted until 2012.

Young died from heart problems at age 45 on a Wednesday morning in November, 2017, That night, the stadium lights at all six of Rowan County’s empty high school football stadiums were turned on at game time — 7:30 p.m. — an acknowledgement that Young had been a game-changer, not just for West Rowan, but for the entire county.

Parnell was the classic late bloomer. He made no impact for his high school varsity team at East until his junior year in 2001. He became a rocket-armed third baseman for the Mustangs and is remembered by fans of Rowan County American Legion baseball as the first baseman on the 43-2 state champions of 2002. Parnell was perhaps the sixth-best player on high school teams that included Hall of Famer Cal Hayes Jr., Drew Davis, Spencer Steedley, Nick Lefko and Julian Sides, but he was the one who made the major leagues.

Parnell’s gift was a powerful right arm, and while strikes proved elusive for that arm in high school and Legion, he matured through adversity in college ball at Charleston Southern. The New York Mets liked his potential and drafted him in the ninth round in 2005, following his junior year.

The road through the minor leagues was bumpy, but by 2008 Parnell found consistency and was a Double-A all-star. He reached the majors late that season, a few days after his 24th birthday.

He consistently threw in the high 90s. In a major league game in 2010, Parnell whipped a fastball that was clocked at 102.5 miles per hour.

His MLB career crested in 2013 when he served as the Mets’ closer. He won five games that season and saved 22 with an ERA of 2.16.

Injuries derailed Parnell’s career prematurely, but he pitched in 335 major league games, 327 of them as a reliever. He won 20, saved 37 and struck out 297.

Attempting a comeback, he threw his final professional pitches for Triple-A Charlotte in 2017.

Jenkins was an exceptional basketball player and was one of the standouts on coach Sam Gealy’s 30-2 state champions in 1986-87, one of the best teams in county history.

He went on to play Division I basketball, starting games at Chattanooga and Ole Miss.

What separates Jenkins from a lot of basketball stars in the county and earned him a lot of Hall of Fame votes is that he was a multiple-sport star.

In 1986-87, Jenkins was honored as Rowan County Male Athlete of the Year.

The 6-foot-7 Kluttz, another basketball star, dominated the boards for the Dunbar Tigers, the East Spencer school that served black students during the era of segregation.

Dunbar had terrific teams in the early 1960s, and Kluttz was a major part of them. He led Rowan County players in scoring, white and black, in 1962. He graduated in 1963.

Kluttz played for two HBCU colleges, attending Johnson C. Smith as a freshman. After two years of military service during the Vietnam era and an honorable discharge, Kluttz returned to college ball at North Carolina A&T and was a standout. As a senior, Kluttz shot 54 percent from the field and averaged a double. His 14.1 rebounds per game in the 1969-70 season still ranks high on the school’s all-time list.

On May 23, 1970, Kluttz was a sixth-round draft pick by the NBA’s Chicago Bulls — the No 96 overall pick. He played in a handful of professional games in the old ABA for the Carolina Cougars and played overseas in Venezuela.

After his playing days, he had a career with Norfolk Southern Railroad and also at Tri-County Alcohol and Drug Abuse Center.

He passed way on Feb. 16 of this year, at his residence in Saint Matthews, S.C.

He may have been overlooked and his deeds forgotten if not for the effort of Hall committee member Terry Osborne, who compiled all the facts and figures.

Heglar led the Rowan County Legion program to the Area III championship series in 1962 in what would prove to be a turning point for local baseball. He struck out 18 batters against Kannapolis, which had been the reigning power in area Legion ball.

West, which played its first baseball season in the spring of 1960, was powerful in its early days. West won the Western North Carolina High School Activities Association championship in 1961 and once had a 22-game winning streak. Heglar was a key factor, posting a 21-3 high school record with four no-hitters. He led the WNCHSAA in strikeouts in 1961 with 111.

Heglar played before the MLB draft was instituted in 1965. He signed with the Minnesota Twins after high school and pitched in the minor leagues in 1963.

After his baseball days, he played softball on the same team as his son — and grandson.  He is known as a  “Scholar of the Bible” and as an advocate for military veterans.

Oglesby received the Community Service Award  given in memory of Fred M. Evans. The late Evans was an educator, coach and mentor to hundreds, and was active in community service before he passed away in 2015.

Oglesby is known as “Coach Ted” and works for Rowan Vocational Opportunities and part-time at The Arc of Rowan County.

Oglesby is driven by his passion for Rowan County Special Olympics. His emotional speech was a reminder that Rowan’s Special Olympics athletes have contributed more than their share to the county’s proud sports history.

He coached Rowan County Special Olympics basketball teams to 10 state titles — four in 3-on-3 competitions and six in the 5-on-5 ranks.

While he retired from coaching in 2014, he remains the No. 1 fan for Rowan’s Special Olympics coaches and athletes.

Freeze is the recipient of the Horace Billings Lifetime Achievement Award which honors excellence in the fields of media and public relations. The award is given in memory of the late Horace Billings, sports editor of the Salisbury Post for 50 years. Billings passed away in 2013.

Freeze, president of the Salisbury Rowan Runners Club for 15 years, has planned, promoted, set up and timed countless races. He officially enters the Hall for his service and his writing skills, but he is also a worthy addition to the Hall as a running and cycling athlete.

Freeze was inspired to run competitively for the first time in 1979 while watching the New York City Marathon on television.

He ran his first mile the next day, beginning an odyssey that led to him competing in the New York City Marathon the next year. He’s run 24 marathons, in all, including Boston and London. His best time was 2:54 in Montreal.

He plans to cycle in Hawaii next March, which will complete his goal of cycling in all 50 states — plus the District of Columbia.

Dennis Davidson and Scott Maddox are co-chairmen of the Hall of Fame committee, which is under the supervision of Steve Clark, recreation coordinator with the Salisbury.

Maddox closed the ceremony with the announcement that the Salisbury-Rowan Hall of Fame is kicking off a fundraising drive as it prepares to establish a permanent home in West End Plaza.