Celebrating Pernelle Shaw at 100: ‘Every time I felt I couldn’t make it, I looked at her life’ 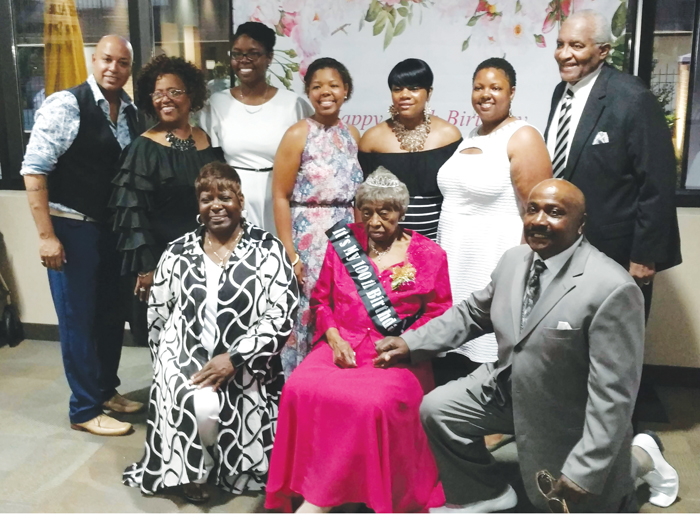 Surrounded by her great-nieces and great-nephews, Pernelle Shaw takes a moment for a photograph at her 100th birthday celebration Saturday evening. Mark Wineka/Salisbury Post

Not many people receive proclamations or resolutions from the mayors of two cities, the governor and a city council of one of the country’s largest cities.

The birthday celebration included testimonies, a poetry reading, prayers, a catered dinner, live music, a praise dance, gifts and relatives visiting from across the country — plus friends who live across the hall from Pernelle at Trinity Oaks.

All honored a woman whose grandparents were slaves. A woman who as a little girl would walk 13 miles to attend school in South Carolina. A woman who often saw the door slammed in her face, only to find another way in. A woman who once was the only certified “Negro” nurse anesthetist in North Carolina.

The evening also paid tribute to Pernelle’s 30-year nursing career at Cook County Hospital in Chicago, where she broke barriers and rose from staff nurse, to head nurse in Unit 56, to the first black supervisor on a day shift, to administrative supervisor in the surgical nursing division to assistant director of surgical nursing.

They honored a family historian, whose big scrapbooks take two hands to hold.

They honored a friend and faithful member of First Calvary Baptist Church in Salisbury.

Kenneth Earl, a pastor, said he has been blessed to have Pernelle as an aunt.

“I don’t know where the time went,” Pernelle said at the end of the evening, “but I went to sleep one night, and I woke up old.”

Pernelle’s actual birthday was Sunday. Her big weekend started with an informal family gathering Friday night, took in the big party Saturday, included a special recognition and proclamation at First Calvary Baptist Sunday morning, and finished with another gathering of friends and family at Thelma’s restaurant Sunday afternoon.

When she was born in 1919, Woodrow Wilson was president. Las Vegas had a population of 30. Only 6 percent of Americans graduated from high school. The average annual salary was $300 a year.

Nieces Arnette Cowan and Dianne Jackson did much of the planning for Pernelle’s big event Saturday. Arnette recounted the highlights of Pernelle’s life, as though she were Pernelle telling the story.

Pernelle was born in Abbeville, South Carolina, as one of eight children — seven girls and a boy. She was only 3 when her mother died, and her father, R.C., raised the big family with the help of Pernelle’s maternal grandmother over the next 10 years before remarrying.

Pernelle’s first school only went to seven grades. She and a sister sometimes had to walk 13 miles to attend the nearest black school with an eighth grade in Honea Path. Other times, her father would take them by horse and buggy, or the girls would stay a week with her stepmother’s daughter, Eugenia.

R.C. Taggart moved his family to a four-room house in Fairview Heights in Salisbury in 1935. His son-in-law, Leo, had found a good job with Southern Railroad’s Spencer Shops, and R.C. was hoping Rowan would offer more opportunities.

The family immediately joined First Calvary Baptist, but the move from South Carolina led to Pernelle’s missing a whole school year. She eventually enrolled as a ninth-grader at J.C. Price and graduated in 1940.

Pernelle earned 50 cents a day as a baby-sitter or working domestic jobs while in high school. A chance meeting at the post office one day led to Dr. Benjamin Whitehead McKenzie’s hiring her as an office assistant, while she also did domestic chores for his wife.

In McKenzie’s office, Pernelle changed dressings, kept office records and collected payments. With encouragement from the McKenzies, she eventually enrolled in the Kate Bitting Reynolds Memorial Hospital School of Nursing in Winston-Salem and went through three years of training with an all-black student body.

In 1943, because of World War II, the U.S. government required nursing students to enroll in the newly created Cadet Nurses Corps, which placed her in an entirely new curriculum.

She graduated from nursing school in 1944, and nursing jobs at Community Hospital in Wilmington (twice) and Good Shepherd Hospital in New Bern followed.

A hospital administrator persuaded her to take a yearlong course in anesthesiology at McHarry Medical College in Nashville, Tennessee, because no African-American school in North Carolina offered the training.

After passing her course requirements in March 1948, she returned to Community Hospital as its only nurse anesthetist.

The constant demands and workload at the hospital led Pernelle to seek a job in Chicago, where three sisters and a friend lived.

At the time, she also was trying to support her father and stepmother back in Salisbury. While still in Wilmington, she applied to Chicago’s Ravenwood Hospital, which was advertising for a nurse anesthetist.

Through correspondence, it looked as though the job was hers. She filled out all the paperwork and sent a photograph of herself to the Chicago hospital. She decided to stop in Salisbury for a couple of days before leaving for Illinois.

While in Salisbury, Pernelle received a special-delivery letter from Ravenwood with the message her application had been denied. Ravenwood’s policy was not to employ blacks as nurses, it said.

Pernelle went to Chicago anyway and soon landed a nursing job at Cook County Hospital, starting her long career there. She met her late husband, Harold Shaw, whom she married in 1960 after having lived in one of the hospital’s nursing dormitories for 10 years.

From 1954 to 1960, Pernelle worked a full-time schedule at the hospital while attending night and weekend classes at DePaul University to earn her bachelor’s degree in nursing.

Harold Shaw was a decorated World War II and Korean War veteran, having earned the Bronze and Silver stars. He was a longtime employee of the General Motors Parts Division in Broadview, Illinois.

The couple loved to fish, going to places such as Lake Erie and lakes in Minnesota. They had been married 48 years at Harold’s death in 2008. Pernelle moved back to Salisbury and Trinity Oaks that year and rejoined First Calvary Baptist.

“No language can express the power, beauty and heroism of your love,” the Rev. Dr. Leamon Brown, pastor of First Calvary, told Pernelle Saturday evening.

Niece Octavia Walker said her aunt is a no-nonsense person.

“If you listen to her and follow her advice,” Walker said, “you’ll have no problem.”

Though she received many gifts Saturday, Pernelle had a simple answer days ago when one of her nieces asked what she wanted for her birthday.