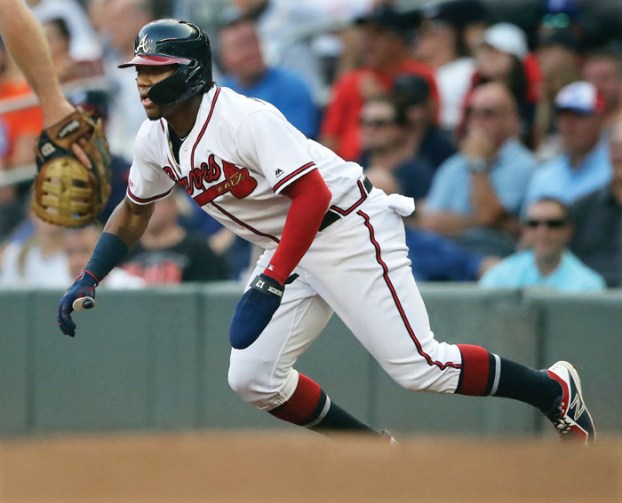 Atlanta Braves' Ronald Acuna Jr. leads off first base during the first inning of the team's baseball game against the New York Mets on Tuesday, Aug. 13, 2019, in Atlanta. (Curtis Compton/Atlanta Journal-Constitution via AP)

By PAUL NEWBERRY AP Sports Writer
ATLANTA (AP) — Ronald Acuña Jr. heard chants of “MVP! MVP! MVP!” as he trotted off the field in the sixth inning, tipping his cap to the crowd when he reached the dugout.
Maybe the Atlanta fans are on to something.
It was another dazzling all-around night for the 21-year-old phenom, who scored his 100th run after smashing one off the wall, hit another one into the seats, and showed off his dazzling arm with a bullet of a throw to the plate.
Acuna’s heroics carried Max Fried to his fifth straight win, leading the Braves past the New York Mets 5-3 on a sweltering Tuesday night.
“It’s kind of normal for me now,” Fried said. “He’s a tremendous player and he plays hard every night.”
With Atlanta under a heat alert and the temperature at 94 degrees for the first pitch, the Braves cooled down a New York team that had won 15 of its last 17 games to surge into playoff contention.
Acuña sparked a two-run first against Zack Wheeler by leading off with a long single off the wall in right-center, coming around to score his 100th run of the season on Josh Donaldson’s single. In the fourth, the youngster lined a 409-foot drive into the left-field seats for his 34th homer.
He wasn’t done, either. Acuña ended the sixth by scooping up a single to left by Juan Lagares and rifling a one-hop throw to the plate to get Todd Frazier trying to score from second.
“His arm is a weapon,” manager Brian Snitker said.
The Mets have lost two in a row for the first time since July 18-19 at San Francisco.
Wheeler (9-7) took the blame. The suburban Atlanta native was pounded for 12 hits and all five Atlanta runs before he was lifted after the fifth.
“I just didn’t have it,” Wheeler said. “It stinks. We’re on this run and I really didn’t give us a chance. This one’s on me.”
Fried (14-4) went six strong innings, surrendering his lone run in the second after plunking Wheeler with a two-out, two-strike pitch. Jeff McNeil followed with a run-scoring single.
That was it for the Mets against Fried, who threw exactly 100 pitches, surrendering six hits and three walks.
The Braves’ shaky bullpen, coming off a grim weekend in Miami, protected the lead even though Shane Greene was charged with two more runs while retiring just one hitter in the eighth. The former Detroit closer has a 14.55 ERA since coming to Atlanta in a trade-deadline deal.
Luke Jackson worked a perfect seventh and Mark Melancon, another trade-deadline acquisition, went 1-2-3 in the ninth for his first save with the Braves and second of the season.
“It was cool,” said Melancon, who was coming off an awful outing against the Marlins. “I had goosebumps coming out of the bullpen.”
Atlanta maintained a six-game lead over Washington in the NL East, while the Mets dropped nine games back.
TRAINER’S ROOM
Mets: A tough night got even worse for New York in the ninth inning. Hustling down the line on an infield grounder, All-Star second baseman Jeff McNeil pulled up with a left hamstring injury just as he reached the bag. McNeil slammed down his helmet in obvious frustration and trudged slowly off the field accompanied by a trainer. “I didn’t feel it pop,” McNeil said. “Just a little snag. Nothing crazy.” One of the NL’s top hitters with a .332 average, McNeil will undergo an MRI on Wednesday to determine the seriousness of the injury. “Hopefully it’s not too bad,” he said. “Maybe it’s just a cramp.”
Braves: Rookie slugger Austin Riley will not need surgery on his injured right knee and expects to return to the Braves’ lineup in about two weeks. The outfielder went on the 10-day injured list Aug. 5 after spraining his knee during a workout. … The outlook is not as promising for Braves shortstop Dansby Swanson, who continues to rehab a bruised right foot that already has kept him out far longer than expected. He went on the IL retroactive to July 24 and still is not sure when he’ll be able to return.
ROSTER MOVES
New York recalled RHP Drew Gagnon from Triple-A Syracuse for this third stint with the team this season.
Gagnon is 3-1 with a 7.65 ERA in the big leagues. The Mets returned RHP Chris Mazza (0-1, 5.19 ERA in four games) to Syracuse.
The Braves also made a roster move before the game. OF Rafael Ortega was called up from Triple-A Gwinnett, where he was hitting .285 with 21 homers.
To make room for Ortega, the Braves optioned RHP Patrick Weigel to Gwinnett. He has been with Atlanta for eight days over two brief stints, but has yet to make his major league debut.
UP NEXT
Steven Matz (7-7, 4.49) will take the mound for New York in the second game of the series, facing Atlanta’s Dallas Keuchel (3-5, 4.83) in a matchup of left-handers. Matz is coming off a strong outing against the Marlins, surrendering two runs over 6 2/3 innings in a 7-2 victory. Keuchel was roughed up by Miami in his last start, giving up eight runs, 10 hits and three homers in 3 2/3 innings.
___
Follow Paul Newberry on Twitter at www.twitter.com/pnewberry1963 His work can be found at https://apnews.com
___
More AP MLB: https://apnews.com/MLB and https://twitter.com/AP_Sports