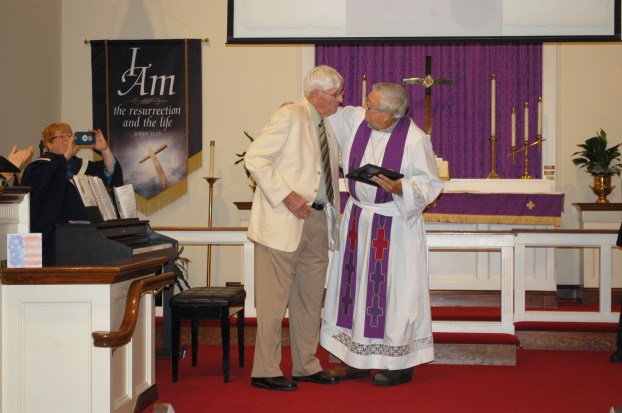 Pastor Bruce Sheeks, of Immanuel Lutheran Church in Rockwell, embraces, Bob Snyder after Sheeks was presented the Order of the Long Leaf Pine at the church service Sunday morning.

The award is the highest in North Carolina recognizing service and has been given since 1963.

Robertson read the letters of recommendation to the congregation about Sheeks’ impact on the community.

“The phrase ‘pillar of community’ is often thought about quite liberally,” Robertson said. “I feel most comfortable that the phrase accurately depicts the nominee I hereby propose.”

Snyder recited part of Luke 14:11 and said Sheeks embodies it.

“‘A person that himself will be exalted,’” Snyder said. “I can tell you that speaks very true of the person who is about to receive this award, a very humble person.”

Robertson said since the 1980s, when Sheeks became a pastor, he has been highly regarded across Rowan County. Robertson spoke about Sheeks’ roles as “custodian, secretary, landscaper, gardener and chef, among countless other things.”

“From producing weekly bulletins with his wife, Kim, and mowing the church lawn to personally cooking gourmet meals for church functions and cleaning the church while overseeing all maintenance needs, Pastor Sheeks relentlessly takes on all things himself and executes them out to legendary perfection,” Robertson said.

Snyder said Sheeks goes the extra mile to follow the commandments and do what God asks of him. Snyder referred to two commandments — love him with all your heart, soul, mind and strength, and love your neighbor as you love yourself — saying Sheeks “fulfills those two commandments without any problem.”

Sheeks spoke briefly after receiving the award and expressed his thanks.

“I can’t say thank you enough for all that was done to make this possible,” Sheeks said. “I did have a response written out here. It’s not more than 10 pages long.”

Sheeks, though, was joking and kept his comments short.

Robertson said that earlier, he told Sheeks he had a gathering for his mother to go to in order to keep the presentation of the Order of the Long Leaf Pine a surprise.

“Moms get blamed for a lot of things,” Sheeks said. “He said, ‘I need to get to my mom’s house as quickly as I can.’”

Sheeks thanked the congregation and said a special thanks to those who recommended him for the award.

“Thank you so much and thank you folks for writing those letters of recommendation and doing all the legwork,” he said. “God bless you.”

Stephanie Walker seeks re-election to Rockwell Board of Aldermen

ROCKWELL — Stephanie Walker is running for a third term on the Rockwell Board of Aldermen. Walker has worked with IBM... read more