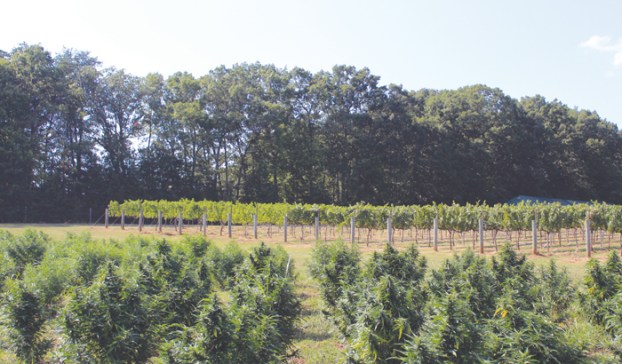 Vineyard branches out with first crop of hemp

In May, co-owner Tommy Baudoin decided to try something different, converting 2 acres of an alfalfa field to production of hemp, the CBD-rich and mostly THC-free cousin of marijuana.

Baudoin said he had been hearing about all the medical benefits of hemp. Are these benefits a placebo or are they real, he asked himself.

Baudoin had heard that people gave hemp to their dogs for CBD medical benefits. His own dog, Charlie, who is about 12 years old, was having “a hard time getting up.”

“He did nothing, couldn’t keep up with us,” Baudoin said. “He was just having a hard time. Well, I started giving him just three little drops (of CBD oil) in the morning and evening.”

The Morgan Ridge property, located at 486 John Morgan Road in Gold Hill, sits on a hill with the Baudoins’ house and the vineyard at one top and the winery at the bottom. On the way up the hill toward the vineyard, Charlie beat Baudoin to the gate dividing the vineyard and winery.

“He hadn’t done that in a year,” Baudoin said.

“That tells me that stuff really does work,” Baudoin said.

So far, Baudoin said, the people who know the vineyard has a field of hemp have been understanding.

“I can’t understand anyone who is truly informed about the product having a problem about it,” he said.

Dispelling much misinformation about the crop, Baudoin said hemp will not give people a high like marijuana does since it has almost no THC. Instead, hemp has lots of CBD oil, which is good for you.

“There is a difference,” he said.

Just as there are different tomatoes in your garden — ranging from cherry tomatoes to “big-fat tomatoes” — “they’re both tomatoes, but they are not the same,” he said.

The crop is strictly regulated by the N.C. Department of Agriculture and Consumer Services to ensure that it has a low level of THC, Baudoin said.

Once the hemp is ready to harvest, Baudoin will have it independently lab-tested so that he knows exactly what is in it.

He had the soil tested for heavy metal to make sure the field had the right soil conditions, he said. Alfalfa was the only thing he had grown in the field before.

He does not use pesticides, herbicides or fungicides on the crop, Baudoin said, making the crop organic.

Still, the weeds have been annoying, and next year he will consider using matting or a cultivator to keep the weeds to a minimum while still not using herbicides.

Baudoin said he is anticipating the market for hemp to grow.

“Once we do this trial run …. next year, instead of 2 acres we will probably bump it up to 5.”

Morgan Ridge grows three varieties of hemp — BaOx, Magic Bullet and Cherry Bomb. BaOx was chosen because it puts out the most biomass among the hemp grown in Rowan County.

Since Baudoin wants the crop with the largest buds, he is giving the three varieties a trail run.

His next step is to buy the equipment to produce CBD oil, which will be sold at the winery and brewery.

Currently, “we market our beer all across the state,” Baudoin said, ranging from Wilmington to Hickory. The goal is to have those same sales reps stop at chiropractor offices and independent pharmacies to sell Morgan Ridge’s CBD oil.

“The one thing is that it will be local,” he said. “We’ll know what is in that bottle… and make sure that (people) are getting the real thing.”

Baudoin said he is not interested in infusing CBD in the food or wine but that hemp-based food products, like hemp burgers and pesto, and beer are things he is interested in trying in the future.

To grow hemp, you must be a “bona fide farmer” and licensed by the state, Baudoin said. But anyone considering growing hemp “would be more than happy making some extra money, making people feel good.”