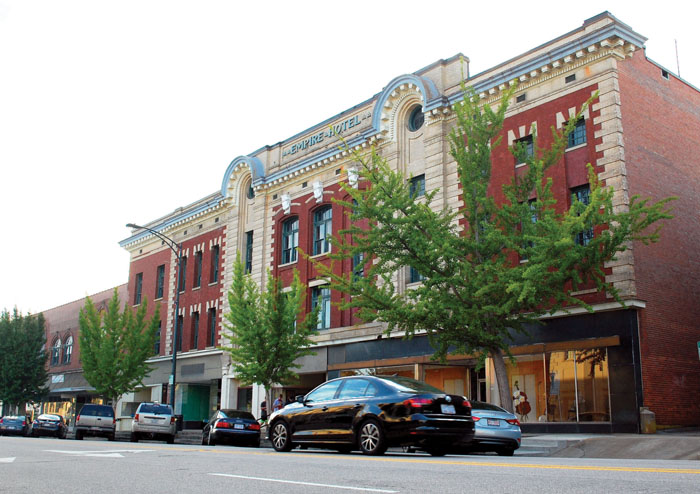 SALISBURY — To provide some financial relief for the developer of the Empire Hotel restoration, the Rowan County Economic Development Commission will ask county commissioners to consider a tax incentive package.

Scott Shelton, vice president of the EDC, has asked the commissioners to provide an additional tax incentive of 25% for the project. Since the Empire received historic landmark status, the developer, Black Point Investments, will receive a 50% tax break. The additional 25% would be for five years starting in 2021.

Construction is set to be completed in 2020.

Commissioners will hold a public hearing on the issue at their Aug. 19 meeting and likely vote on the resolution for the additional incentive.

Shelton said Rowan EDC is trying to push the project along, and the developers are hurting without $1 million in funding from the state.

The state budget approved by the General Assembly provided no funding for the Empire Hotel Redevelopment Project. But Gov. Roy Cooper, who vetoed the budget, proposed a $1 million grant for the project as one of 68 local projects intended to spur economic development in rural areas.

Shelton said the Empire Hotel project is an economic opportunity that will bring jobs and add to the tax base, and the county will benefit financially from the construction phase.

The EDC estimates the value of the property will increase to $13 million once the redevelopment is complete.

Meanwhile, the city of Salisbury is also set to consider a modified agreement for the project. It includes extending the option contract to June 26, 2020. It also offers two options on the sales price. If the developer purchases the property on or before April 30, 2020, the price would be $560,000; if the developer purchases it after April 30, the price would be $700,000.

Other incentives are included for a water line, water tap, utility charges and sidewalk construction.

Britt Weaver, Black Point Investments principal, said he has been going to the city and county asking what he can do to help the project along.

Black Point Investments previously agreed to a price of $880,000 for the property. And the company currently has a lease agreement. Black Point has paid half of the mortgage payment and the city has paid the other half, beginning this year. Weaver said Black Point isn’t asking for anything that the company wouldn’t contribute itself.

Shelton says the incentive is a pay-to-play plan that gives the county a level of protection if the deal were to fall through.

Weaver said Black Point is not going to walk away from the project and is trying to find ways to close the gap. The biggest hurdle with such projects is finding someone to underwrite it, he said.

“It’s a tight project,” Weaver said. “We have to go after everything.”

By working with the city, county and the U.S. Department of Housing and Urban Development, Weaver said he is inching closer to the “end game.” The support from the city and proposed support from the county has given him confidence the project will be completed.

He said the city, county and Black Point are striving for the same goal.

Compared to previous projects, this one is challenging, said Weaver, who has worked on other historic redevelopment projects. Challenges include adequate parking and the historic landmark status.

“It’s a process,” Weaver said. “If it was easy, it would have been done five years ago.”