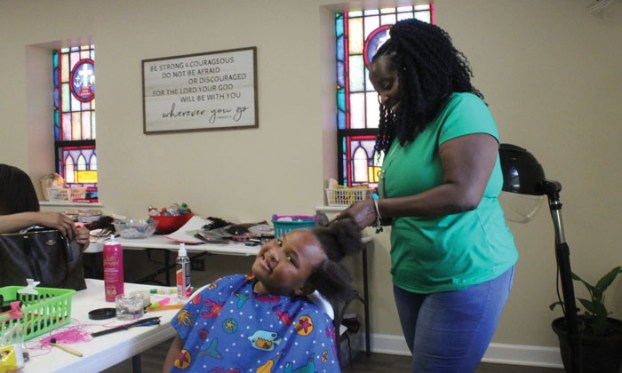 SALISBURY — St Luke Baptist Church on Saturday hosted its second annual Haircuts and Hairdo’s event, giving kids ages 5 to 16 haircuts, school supplies and clothes who may not have easy access to them.

At the event, roughly 10 hairstylists and five barbers filled up the church’s event room. Each barber and stylist were offering their expertise — cutting, styling and edging kids’ hair. In addition, other sponsors of the event included Polaris Law Firm and the Salisbury-Rowan Chapter of the NAACP. All came with volunteers at and their contributions, which extended beyond hair cuts to food and school supplies.

So why offer haircuts to kids who are going back to school?

“I know when I was growing up, it get’s so hard to break away and get to the barbershops and the barbershops are crowded going back to school,” said LaMyron Greene, who helped this year’s event and organized the first annual back-to-school haircuts at the church last year.

Saturday’s event was a way to help parents and kids out for free, said Greene, who was a barber Saturday. Haircuts typically run $15 to $20 and parents have to wait, he said.

And, Greene said, he was “kind of barber on the side … it’s just a hobby, so I decided to get a group of my friends involved.”

“It’s really picked up and this is only the second year,” he said.

Last year, Greene said that the event already had about 80 kids.

Shanikka Gadson Harris and her sister Shakeena Gadson — who together call themselves TwinBlitz, a nickname coined to describe the twins’ “live and poppin'” personas — said they grew up in foster care together.

“We basically had to learn how to do hair on each other if we wanted it to be nice,” Harris said.

By high school, Harris and Gadson were not only doing their own hair but other people’s hair as well, they said. That was about 16 years ago, they added, and they have continued ever since.

You don’t have to be rich to give back, Gadson said.

Harris and her sister had been doing free hair stylings for roughly nine years, Harris said. The first two had been Rowan Public Library and Hall Gym.

Asked why they joined the church’s event this year, Harris said collaboration is key.

“One hand washes the other, and they both wash the face,” she said. “The smile on their face after they get their hair done makes it so worthwhile.”

It is good to see more little girls coming out to the event, too, said Crystal Greene, who is LaMyron Greene’s mother and has been stylist at both years’ events.

And, Gadson said it brings her satisfaction to know that the kids look good so “they know that are going to do better.”

Events like Saturday’s have meaning, said Ryan Stowe, a representative of Polaris Law Firm, which provided some of the clothes and school supplies offered to kids at Saturday’s event.

The kids have been excited about the event, too.