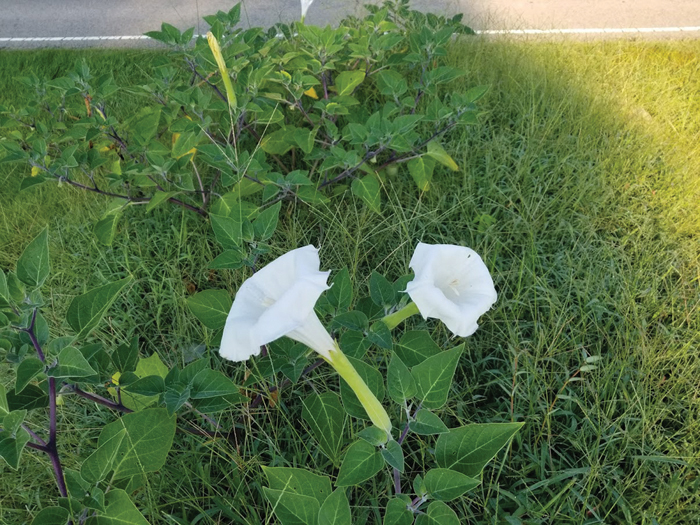 Don’t be fooled by its beauty — jimsonweed is a very poisonous plant.

I drove past an unusually large, flowering weed on the side of the road the other day that had a particularly interesting bloom. It had a large, white trumpet shaped bloom in the early morning and by afternoon it would be completely closed. The blooms closed each day at noon for several days that week.

The plant is a jimson weed (Datura stramonium), native to Asia and in the nightshade family, which includes potatoes and tomatoes.

The large flowering weed can reach a height up to five feet with jagged leaves resembling an oak leaf. It’s a rather beautiful warm-season herbaceous annual found along roadways, abandoned fields and pastures.

But don’t be fooled by its beauty — jimson weed is a very poisonous plant. All parts of the plant are poisonous including, the seeds, fruit, and leaves, and is a serious problem for livestock producers. Please be aware of this poisonous plant as it is also dangerous to humans.

The weed is also called Jamestown weed, referring to the massive poisoning of soldiers in the late 1600s eating plant as a salad.

Go to https://plants.ces.ncsu.edu/plants/datura-stramonium/ for more detailed information on this unusual weed.