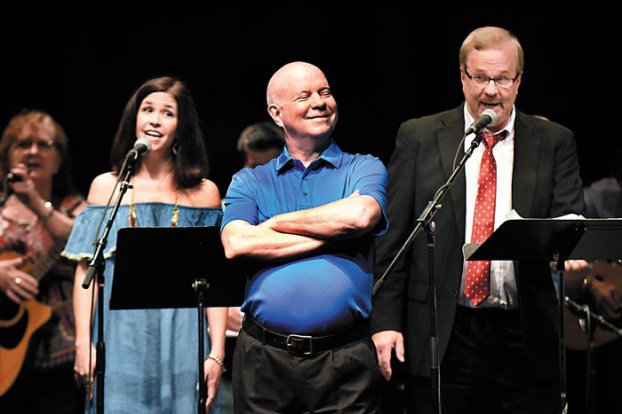 Kent Bernhardt with Salisbury Symphony conductor David Hagy in the production of "Bury Home Companion." photo by Wayne Hinshaw, for the Salisbury Post

‘Comic relief for a troubled world’: ‘A ‘Bury Home Companion’ back for 2nd year

SALISBURY — Last summer, Kent Bernhardt and Kay Peeler felt as though they captured lightning in a bottle, creating a theater of the mind that’s the hallmark of radio programs such as “Prairie Home Companion” and others from the early 20th century.

Can they do it again?

They’ll find out when the Salisbury Symphony Orchestra presents the second “A ‘Bury Home Companion” on Aug. 24 at the Meroney Theater, 213 S. Main St.

“People said they loved the gentle humor of last year’s show,” says Bernhardt, who writes the script, while Peeler puts together the musical acts. “The more local it is, the funnier it is.”

The audience will be treated to “Tales From the Church Loft,” featuring local church humor, and the “Phone Call With Mom” skit.

“Everybody can imagine talking to their mom,” Bernhardt says. It never seems to go well, he notes.

And there’s also a reference to the Foxy Lady, sure to cause a stir.

The first year of the flagship fundraiser, Bernhardt wrote “The Ed Sullivan Show,” and it was a big hit. But last year, they wanted something a little different. They hit upon the idea of a radio show modeled after “Prairie Home Companion” because they’re both longtime fans.

The audience loved it, and the Meroney was nearly full.

This year’s show will pay tribute to Foster Owen, a longtime assistant city manager who died five years ago.

“This show is about the fabric of the city,” Bernhardt says. “You just saw Foster everywhere. He was a city servant.”

As a retired public school chorus teacher in Davidson and Iredell counties, Peeler has a wide network of former students.

“She’s always wanting to go see this performer or that,” Bernhardt says, adding that the two have gone as far as Nashville to see students she taught.

Headlining this year’s show are the Hall Sisters from Raleigh.

“They have some tight harmonies, and they’re really good,” Bernhardt adds.

Eli Yacinthe and Sarah Claire King, the duo who brought down the house last year, are back this year. King will perform as a soloist, and Yacinthe is part of a trio.

Rounding out the cast are the Radio Players, who include Sara Lee, Alice Rich, Mary Ann McCubbin, Russ Stevenson, and Dan Mikkelson with sound effects.

“This performance started out as one of the Salisbury Symphony’s major fundraising events but under the careful guidance of Kent Bernhardt and Kay Peeler has become one of our most highly anticipated events of the symphony season each year,” says Bill Buecher, executive director of the symphony. “We often have people calling the symphony office just to ask when ‘Bury Home’ tickets are going to go on sale.”

“Kent and Kay have a unique, gentle humor which makes you feel good, brings you to tears and makes you realize just how special the people in our small-town community really are,” Buecher added. “I hope we can continue to bring this brand of humor and great musical performances to Salisbury for many years to come.”

Members of the Salisbury Symphony Orchestra committee that has helped organize the show include Andrea Anders, Laura Lewis, Linda Jones and Randy Overcash.

Bernhardt notes that there’s no political humor, local or national, in the show.

“This is timeless comedy,” he says.

“It’s a breath of fresh air,” Peeler adds. “You walk in and you laugh. It’s comic relief for a troubled world.”

For tickets to “A ‘Bury Home Companion,” call the symphony office at 704-216-1513 or visit www.salisburysymphony.org.

Vineyard branches out with first crop of hemp