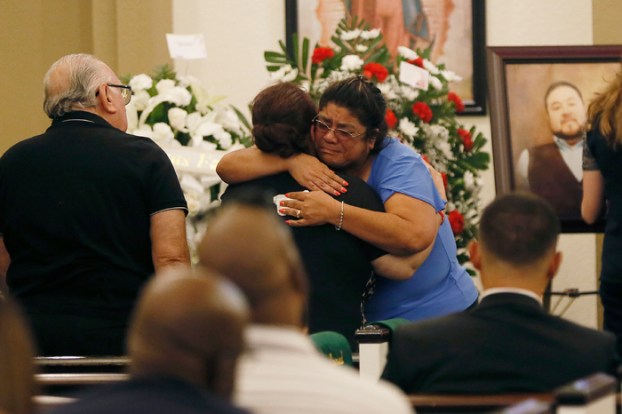 Friends and family attend the rosary for Leonardo Campos at Sunset Funeral Home in El Paso, Texas, on Thursday. A memorial service was held for 41-year-old Leonardo "Leo" Campos, who was killed along with his wife when a gunman opened fire at an El Paso Walmart. Leo Campos grew up in the Rio Grande Valley in South Texas but had in recent years moved to El Paso. Briana Sanchez/The El Paso Times via AP

Cal Thomas: Mass murders are a symptom of bigger problem

A manifesto thought to be linked to the El Paso killer was posted online just before the assault on Walmart shoppers and, according to The Washington Post, maintains that he has held “his white supremacist ideology for many years, predating President Trump and his 2016 campaign, which he says did not influence his reasons for carrying out the attack.” The Dayton shooter described himself on social media as a pro-Satan “leftist” who hoped to vote for Sen. Elizabeth Warren for president.

One question no one is asking: Why is evil rampant in our country? I don’t mean obvious evil like the all too frequent mass murders. There are other evils that seem to have come from the “pit” and are roaming among us uncontrolled.

We seem to tolerate everything these days and oppose controlling what once was called evil behavior. Bad behavior is now considered good and good behavior is thought to be bad. Those who practice good behavior are often labeled with words that end in “-phobe.” Societal norms have been undermined. Normal is what individuals think is true for them.

If this sounds like a sermon, maybe that’s what we need to hear. Revivalist preachers knew how to deliver them. Start with Jonathan Edwards’ classic “Sinners in the Hands of an Angry God.” His main point was that individual sinners and nations must repent and ask God’s forgiveness in order to escape judgment and national destruction.

Consider Abraham Lincoln’s “sermon” to the nation. On March 30, 1863, Lincoln issued a Proclamation for a Day of Humiliation, Fasting and Prayer because of the Civil War, which was tearing America apart. This passage contains a message for us:

“And, insomuch as we know that, by his divine law, nations like individuals are subjected to punishments and chastisements in this world, may we not justly fear that the awful calamity of civil war, which now desolates the land, may be but a punishment, inflicted upon us, for our presumptuous sins, to the needful end of our national reformation as a whole people? We have been the recipients of the choicest bounties of heaven. We have been preserved, these many years, in peace and prosperity. We have grown in numbers, wealth and power, as no other nation has ever grown.

“But we have forgotten God. We have forgotten the gracious hand which preserved us in peace, and multiplied and enriched and strengthened us; and we have vainly imagined, in the deceitfulness of our hearts, that all these blessings were produced by some superior wisdom and virtue of our own. Intoxicated with unbroken success, we have become too self-sufficient to feel the necessity of redeeming and preserving grace, too proud to pray to the God that made us.

“It behooves us, then, to humble ourselves before the offended power, to confess our national sins, and to pray for clemency and forgiveness.”

Aleksandr Solzhenitsyn reached a similar conclusion when he considered how communism had managed to dominate his native Russia for seven decades. In his 1983 Templeton Prize address, Solzhenitsyn said: “More than half a century ago, while I was still a child, I recall hearing a number of older people offer the following explanation for the great disasters that had befallen Russia: ‘Men have forgotten God; that’s why all this has happened.’

“Since then I have spent well-nigh 50 years working on the history of our revolution; in the process I have read hundreds of books, collected hundreds of personal testimonies, and have already contributed eight volumes of my own toward the effort of clearing away the rubble left by that upheaval. But if I were asked today to formulate as concisely as possible the main cause of the ruinous revolution that swallowed up some 60 million of our people, I could not put it more accurately than to repeat: ‘Men have forgotten God; that’s why all this has happened.'”

These men were on to something. Blaming others hasn’t worked. We’ve tried that and more. Why not try God?

Editorial: Referendum should be easy vote for Salisbury council

The Salisbury City Council has an easy vote in about a week, and minutiae should not prevent a unanimous decision.... read more