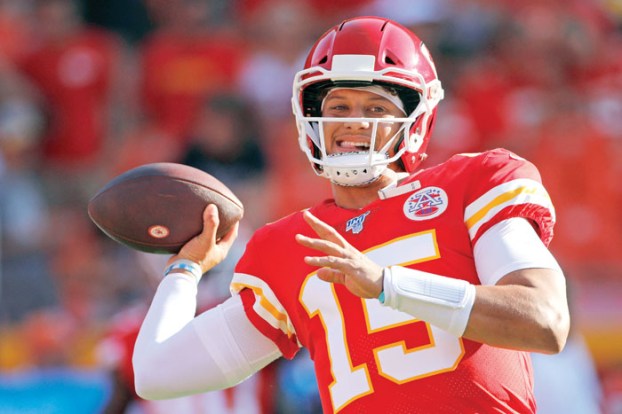 By DAVE SKRETTA AP Sports Writer
KANSAS CITY, Mo. (AP) — Patrick Mahomes took his first snap of the preseason, dropped back and set his feet, then threw a perfect pass down the sideline to Chiefs tight end Travis Kelce for a big gain.
It’s was almost as if last season never ended.
The league MVP picked up where he left off from his record-breaking debut as the starter, leading Kansas City to a first-quarter touchdown in a 38-17 rout of the Cincinnati Bengals on Saturday night.
Mahomes did a bit of everything on his only series with the first-team offense, too. The gunslinger was 4 for 4 for 66 yards, added a wild 10-yard scramble in which he wisely slid at the goal line to avoid a big hit, and even induced an offside penalty with his barking cadence.
“I felt great. To get out there, make some throws, get the guys kind of rolling,” he said. “Run game, pass game, I thought it was a good drive to start everything off.”
It came after an equally impressive drive by the Cincinnati starters.
Andy Dalton converted a series of third downs while leading the Bengals on a 14-play, 75-yard TD march to open the game . And he did it without the services of injured wide receiver A.J. Green or his top two running backs, Joe Mixon and Giovani Bernard, who were given the night off.
“That’s how you want to start the game,” Dalton said. “We feel like we’ve got depth on this team. We’ve got talent. So for us to miss some of our guys that’ll be starting for us this year, not in there, I thought we did a great job.”
On that drive, perhaps. But first-year head coach Zac Taylor had a different assessment as a whole.
“You really look at a game like this, 38-17 final score, we had two turnovers on special teams, countless penalties on offense and a defensive pass interference that extended a drive that had a big stop,” he said. “That’s life in the NFL right now. We’ve got to correct those mistakes.”
The most interesting thing to happen in the game came late in the first half, when Kyle Shurmur was marching the Chiefs downfield. His throw to Byron Pringle down the sideline was picked by safety Brandon Wilson, scuttling the drive and giving Cincinnati a chance with the ball.
But under a rule change approved by NFL owners in March, pass interference calls can be reviewed — a response to the controversial on-call in the NFC title game last season. And when officials reviewed the play Saturday night, they decided that cornerback Tony Lippett had caused interference.
The penalty gave the Chiefs the ball back and they wound up kicking a field goal.
In a delicious coincidence, the provision passed by a 31-1 vote of owners at the league’s annual meeting in Phoenix. The only team that voted against the rule was Cincinnati.
STAT WATCH
Dalton was 7 of 9 for 80 yards. … Bengals rookie Ryan Finley outplayed Jeff Driskel in the race for the No. 2 QB job, going 13 of 18 for 109 yards with a TD and a pick. … Josh Caldwell led the Chiefs with 59 yards rushing and a TD. … Each team was penalized 11 times for 206 yards total.
EARLY EXIT
Chiefs CB D’Montre Wade, who has been competing for a backup job, was ejected in the third quarter for hitting a defenseless receiver near the head. The Bengals ended the drive with a field goal.
ROOKIE WATCH
Chiefs WR Mecole Hardman caught a shuffle pass from Shurmur in the second quarter and went 17 yards for a touchdown . The second-round pick finished with two catches for 31 yards in his debut.
“They called it in the huddle and I was like, ‘Oh yeah, it’s my chance to score right here,'” Hardman said. “Got the pitch and I saw it open up, I saw the seam. I just said, ‘Let’s hit it and get into the end zone.’ I got in there. It felt good. Hopefully there are many more to come.”
EYE ON THE BALL
Bengals punt returner Darius Phillips recovered his own muffed punt in the second quarter, but he wasn’t as fortunate in the third. The Chiefs’ Deon Yelder recovered his next one, and quarterback Chase Litton proceeded to hit running back Darwin Thompson with a 29-yard touchdown throw.
INJURIES
Bengals SS Clayton Fejedelem was carted off with a right ankle injury. TE Cethan Carter left with a neck strain, RB Trayveon Williams hurt his ribs and DT Christian Ringo hurt his thumb.
Chiefs TE John Lovett left early in the second half with a shoulder injury.
MISSING STARS
Bengals DT Geno Atkins joined Mixon and Bernard in getting the night off. The Chiefs sat RB Damien Williams, who recently returned from a hamstring injury, and DE Frank Clark, who has been dealing with a sore wrist after signing a $104 million, five-year deal in the offseason.
UP NEXT
Bengals: At Washington on Thursday night.
Chiefs: At Pittsburgh next Saturday.
___
More AP NFL: https://apnews.com/NFL and https://twitter.com/AP_NFL